Electronic Arts has officially unveiled the players who are part of the TOTS (The of the Season) of the Bundesliga in that of FIFA 21. Let's find out together!

After Premier, Liga Spagnola, the TOTS of the community (and all the “minor leagues) comes the turn of the German championship. The TOTS of the Bundesliga, certainly less fascinating than the others but still full of points of interest.

The German top league team will be available in packages (with the addition of themed SBCs) until next Friday, the day in which Electronic Arts will launch the TOTS of our Serie A Tim. The list includes several elements of the highest impact, among which the prominent elements such as Robert Lewnadowsky, Thomas Mueller or Jadon Sancho, but also and above all the super midline composed by the duo Goretzka - Kimmich. Watch out for the “surprises” Lacroix and Baku that make up two thirds of a solid and fast defense. 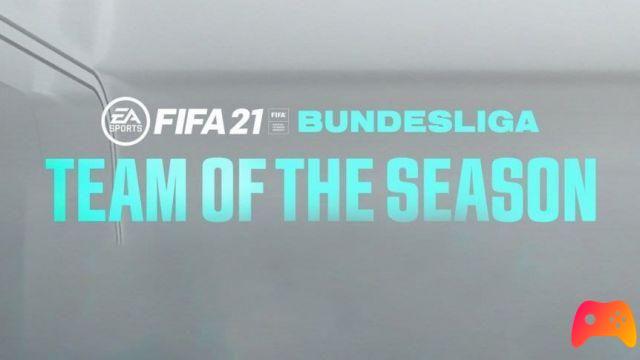 However, here is the complete team in detail:


And what do you think of this team? Will you buy someone? Have you found one? Let us know in the comments!

Do you want to be an expert and know all the tricks, guides and secrets for your video games? Epictrick.com is a group of video game enthusiasts that want to share the best tricks, secrets, guides and tips. We offer the best content to be a source of useful information, so here you can find guides, tricks, secrets and tips so you can enjoy your games to the fullest. Are you ready to get all the achievements of that game that you resist so much? Enter and enjoy your favorite video game to the fullest!
FIFA 21, unveiled the TOTS of the Liga NOS! ❯

FIFA 21, the first team of the Future Stars arrives!