Back 4 Blood is about to receive a series of new free content for all players as well as those who will make up the Annual Pass. Turtle Rock Studios has indeed unveiled the first year roadmap.

Free upcoming updates include a offline single player mode which will allow you to keep the progress with the rest of the profile, new cards including a new type, functionality and an event for the Christmas holidays in December. Starting in 2022, a new difficulty level will also arrive, a cooperative mode and much more.

Let's see the complete list of all the free news coming with the next updates: 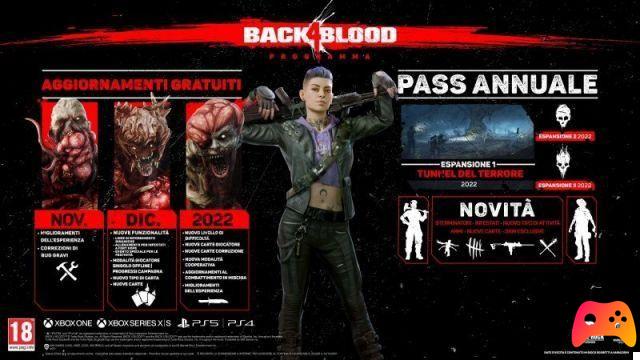 The upcoming content schedule also unveils Tunnels of Terror, the first expansion of the Back 4 Blood Annual Pass which will be available in 2022. The DLC will add unreleased content to the story, new playable Exterminators and Haunted, exclusive activities, weapons, cards and skins. More details will be revealed in the coming months.

Resident Evil Re: Verse has been postponed

Add a comment from Back 4 Blood: first year roadmap revealed