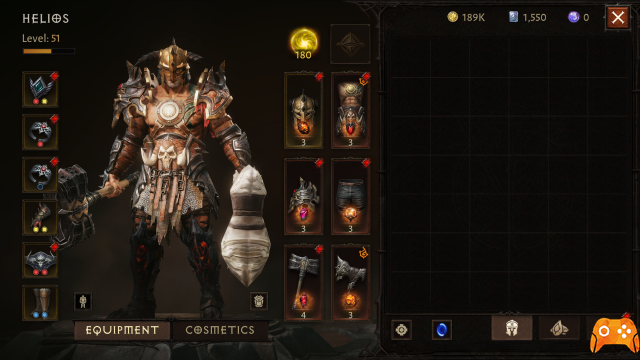 Barbarian has always been the ideal class for Diablo players who prefer fast, brutal melee action without having to worry about survival thanks to the tank nature of the class. In this guide, we'll give you some of the best builds for the Barbarian class in Diablo Immortal and explain how to use them.

In Diablo Immortal, fighting against hordes of demons and cultists is no problem for the Barbarian class. It excels at crowd control and locking everyone in one place. Barbarian is also effective in PvP depending on the skills and build you use.

Blessing of the Worthy can be used as a passive gem on your weapon that will activate when you take damage. Has a 20 percent chance to deal damage to nearby enemies up to a percentage of your maximum health depending on the gem's rank.


Berserker's Eye is a double-edged gem. You deal extra damage but also take extra damage depending on the gem's rank.

Seeping Bile takes a slot in your weapon that gives your weapon a 4% chance to inflict poison. Deals extraordinary damage and increases duration depending on the rank of your gem.

Trickshot Gem decreases the drain rate of a channeled skill based on the rank of your gem.

Lightning Core charges attacks and movement slowly with electricity. When full, it will release a chain of lightning on the next attack which will deal damage depending on the rank of your gem.

The pain of submission deals increased damage to enemies out of control. The damage will depend on the rank of your gem.


Eternal Torment inflicts agony on critical hits that deal extraordinary damage and has a cooldown depending on the rank of your gem.

Power and Command change stats every 9 seconds. Power increases your Attack Damage, and Command increases the damage of your Abilities depending on the Gem's rank.

The best attributes for the barbarian

For the best attributes for barbarian builds, your primary focus will be Strength and your secondary will be Stamina. You will prioritize damage as your main focus will be crowd control and your skills will automatically heal you.

The best skills for the barbarian

For the best skills for barbarian builds, you'll use Frenzy that launches a frenzied attack for damage. Each hit increases your attack speed by 8 percent for 3 seconds, stacking up to 5 times.

immortal anger with the cooldown of 30 seconds it will be your favorite ability that will make you immune to death for 5 seconds and heal you for 30% of your damage. It will automatically activate when you take fatal damage.

Impeller it will be your main damage dealing ability that makes an AOE attack reducing your speed by almost 70%. Instead of having a cooldown, this skill consumes energy and recovers when not in use.

The Berserker's Wrath with a cooldown of 30 seconds it is an enhancement ability that will increase attack speed by 50% and movement speed by 20% for 6,5 seconds.

Hammer of the Ancients with the 12 second cooldown it deals massive damage and then deals extraordinary damage to your enemies for approximately 2 seconds after the ability is activated. It is good for astounding enemies.

Chained spear is a medium range ability that throws 3 chained spears in the direction you are facing. Deals 813 damage and returns impaled targets close to you. It is good for blocking targets.

Trample on the ground is a charged ability that stuns enemies in front of you while dealing massive damage to them. This is good for crowd control.

The best weapons for barbarians

The tempesta will increase the range of the Whirlwind ability but will also reduce movement speed a bit more. When awakened, the Whirlwind power consumption rate is reduced by 10 percent.

Il Long time disonorata will increase the duration of the Demoralize ability by 30 percent. When awakened, it will decrease cooldown time by 10 percent.

Il Broken soul will increase your critical hit chance instead of attack speed when using the Berserker's Wrath ability. When awakened, it will decrease cooldown time by 10 percent.

The stone fall will increase the damage for the Ancient's Hammer skill by 10 percent. When awakened, it will decrease cooldown time by 10 percent.

For the best armor for barbarian builds, you'll use The storm is coming. Reduces the cooldown of Berserker's Wrath by 15 percent. When he is awakened, he will further reduce the cooldown time by 10 percent.

Collection lures all enemies when it damages with the whirlwind ability. When awakened, the Whirlwind power consumption rate is reduced by 10 percent.

Enduring hatred Increases the duration of the Berserker's Wrath by 30 percent. When awakened, it reduces the cooldown by 10 percent due to the berserker ability's wrath.

Fast wing allows the Sprint skill to increase the movement speed of nearby allies. When awakened, sprint recovery time is reduced by 10 percent.

The best champions for barbarian

For the best models for barbarian builds, you'll focus on Winner tree which will increase your damage, build up attack speed and give you some life for survival.

Survived tree it will be your go-to tree if you focus on PvE rather than PvP, which will increase your life and armor.

If you're focusing on PvP, you'll be investing in Gladiator Tree. Maximize life and armor. Then focus on Inflexible an escape artist.