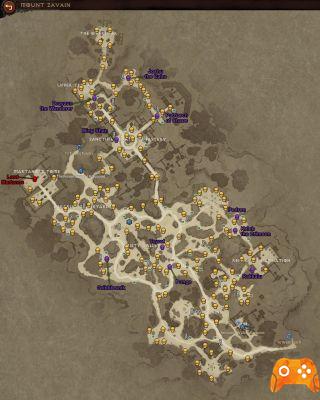 Mount Zavain is a rocky mountainous area that players will visit towards the end of Diablo Immortal as they search for the remaining Worldstone shard. This Diablo Immortal Mount Zavain area guide will take you through this area and explain all the activities and missions you can take part in.

Mount Zavain is intended for players who are at least level 45 and have completed the Bilefen storyline. While the enemies in the region are intended for level 45-50 players, thanks to level scaling, you can find a challenge in Mount Zavain even at the higher levels.

Mount Zavain serves as the abode of the monks and you will see the signs of their presence as you continue your journey to the Worldstone Fragment.

Continue your journey to Mount Zavain in search of the last stone fragment in the world.

Look for the World Stone Fragment at the top of Mount Zavain. Kill six of the assault creatures. He talks to Oza. Oza will go to Sentinel's Watch.

The aggression of the Khazra

Talk to the Captain of the Sentinel Guard. He pays attention to Captain Verek's strategy. He follows the lieutenant and defeat Khazra. Consult guard Parker.

Reach the razed village. Examine the body. Ralvar will lead you into the village. Remove debris from the well. Talk to Guard Krynn Free Guard Weir.

Return to Captain Verecks in Sentinel's Watch after killing Khazra.


In the lair of Khazra

Outside the Sentinel Guard, find Oza. He talks to Oza. He enters the Khazra Den. Remove the Khazra threat. Investigate Khazra Den. Eliminate the Cultists and Khazras they control.

Kill the Cultists and reveal the Secret. He locates the cultists' lair. Defend yourself from summoned demons. He talks to the mysterious stranger. Kill the Smoldering Horror and exit Khazra Den.

The identity of the unknown

You will have to go back to Oza now.

Oza will take you to the Misty Valley. She talks to Oza. Oza must be protected. Draw the Sphere of Spirit.

Investigate the cave, kill lurking undead, look for clues and talk to Oza.

Put out the Flames, kill the Cultist Flamebearer and investigate the Scorched Papers

Talk to Oza. Take Oza to the Eastern Shrine. Talk to Oza of the Vision Look for the Shrine of Cultists.

Go to the Holy Land Monastery and kill the Demons. Destroy the Demonic Catapults and talk to Oza.

Take back the stone fragment of the world

Make your way to the Sanctuary. Talk to Oza. Examine the Worldstone Shrine and slay the Summoned Demons of Dravec. Look for Dravec in the boot camp. Agronix must be eliminated. Go to the Terrace and kill Agronix. Follow the example of Oza and Dravec.

Showdown at the peak

Help the Wounded Acolyte The Duel of Oza and Dravec. Start the Solo Story Dungeon and reach the Peak. Contact Oza and go to Dravec and the World Stone Shard. Dravec will appear and flee to the Frozen Tundra. To continue, you must reach level 51.

How to farm the Monte Zavain area in Diablo Immortal

The chances of dying here are extremely slim, even though the generated boss units have limited health pools. Rare encounters are more likely when you run through these opponents quickly. When farming for monster essence, max level players should camp out in this location.

For repeatable events, you can hunt down and kill Lord Martanos every 30 minutes on Mount Zavain to farm Zakarum Sigil. These seals are essential to the Ancient Nightmare event in the area.

Alternatively, you can also complete the Mount Zavain Codex to get decent XP quite easily. Once the Codex unlocks at level 45, simply complete the following tasks to get zone completion and nearly 100.000 XP