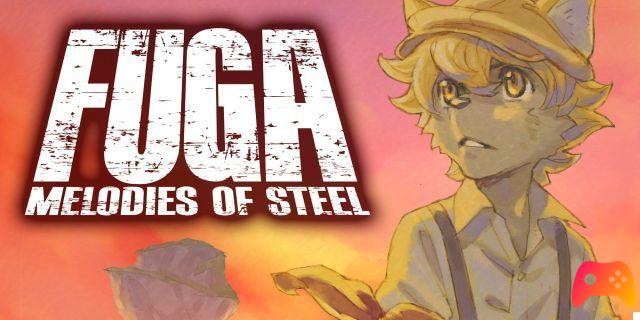 The war rages! The Bermanic army invaded the peaceful lands of Gasco, destroying the houses, kidnapping or killing the inhabitants. A small group of orphans sets out to find a safe place in the midst of an ocean of suffering in Escape: Melodies of Steel.

When we picked up the title, we must confess it, we were thinking of something extremely light in the themes. We were misled by the posters, the screenshots, the wonderful illustrations of this game, but it didn't go as we expected.

Escape: Melodies of Steel is anything but light, a very simple JRPG in appearance and mechanics but which has many levels of depth to be explored.

We did the premise on the plot, but there is still something to point out: the metaphor is very clear and does not even want to hide too much. It is clearly a reference to the Nazi invasion of France during the Second World War e the French atmosphere can be felt almost everywhere, from illustrations to the names of the characters (as it was already in Solatorobo, Editor's note). The same is true, but for Germany, for the very bad Bermanics.

What struck us is this, let's say it now to cut the bull's head, wonderful game, it is the innocence and fragility of these little zoomorphic children who find themselves alone in a world bigger than them, lost, hungry ... orphans, in a land destroyed by war.

The tones are anything but joyful. Escape: Melodies of Steel doesn't want to sweeten the war, far from it, at times it seems to want to denounce what we all know very well but that at times we pretend not to know, namely that out there is full of children caught in the grip of wars and armed clashes of which they are certainly not the cause but, unfortunately, always victims.

The game is made up of moments of battle and moments of "relaxation", if we can call it that. When our little friends stumble upon a colossal tank hidden in a cave they can only set out on a journey and try to survive.

This results in turn-based clashes with the Berman forces that will be anything but simple. The chariot, called Taranis, is equipped with several turrets equipped with different weapons that apply to different enemies and also with a very powerful cannon capable of instantly wiping out any enemy, even the most powerful.

With this premise it would therefore seem very easy to defeat the enemy. Well: no. The core cannon feeds on ... anime, precisely. To use it, it will be necessary to sacrifice the life of one of the children aboard the Taranis.

The player is therefore faced with an ethical choice that is really difficult to make. All enemies can be defeated without using the cannon but to do so we will have to be really prepared. To get ready for the various challenges, we will have to use the moments of rest to make the children tighten strong and indissoluble bonds, which will turn into bonuses during the battles.

At the same time, tightening these bonds tightly will make it more and more difficult to make the aforementioned extreme decision. In short: if you have a heart, how can you sacrifice the life of one of the very nice (and very sweet) children?


In addition to forging bonds, during moments of rest, we will be able to fish scrap metal from the bottom of the Taranis with a real fishing rod, going to recover useful materials for bartering in the villages and for upgrades of our powerful vehicle.

Even in battles it will be necessary to play cunning. As we mentioned earlier, each enemy will be more susceptible to a weapon than all the others. Therefore, playing with the training of our little fighters we will be able to obtain different effects, greater or lesser. Finding the best combinations will not be easy but not too complicated.


From this point of view Escape: Melodies of Steel presents a very gradual and above all well balanced difficulty. This aspect makes the game appreciable both by those who love RPGs and by those who have never gone too hand in hand with the genre. Another note of merit must be given for the perfect Spanish localization, we did not expect all this care and above all: we did not expect there were no typos.

We found neither flaws, nor bugs of any kind. CyberConnect2 worked excellently. He created a simple but profound title, with few mechanics but fully functional. A round of applause is a must. If we really have to find a flaw, we could find it in some stylistic choices that are a little too sweet. It is true that we talk about children as protagonists, but sometimes this ostentatious innocence can be annoying.

What else to say about this little gem that is Fuga: Melodies of Steel? Nothing, except that a small video game made us understand, if there was still a need, that war is a horrible thing. And not with empty and banal rhetoric, but with the simulation of what happens to many children in the world every day. Writing this review in the aftermath of the death of a giant man like Gino Strada (one who saved adults and children in war scenarios and beyond) can only make us shed a tear. Because out there the innocent have neither Gino nor Taranis to save themselves.

add a comment of Escape: Melodies of Steel - Review