Greedfall: Gold Edition is ready to land on next gen the next one June 30 2021. The acclaimed fantasy RPG by Spiders Studio e Focus Home Interactive originally released in 2019, it lands on next gen with a series of features and improvements designed for the new consoles. The improvements include native 4K on PlayStation 5 and Xbox Series X, fast loading and greater game stability.

The physical version of GreedFall: Gold Edition will include 3 lithographs, a double poster and a set of stickers. The De Vespe Conspiracy expansion expands the game world and story by leading the player to set foot in an unknown region of Teer Fradee and face a new mysterious intrigue. 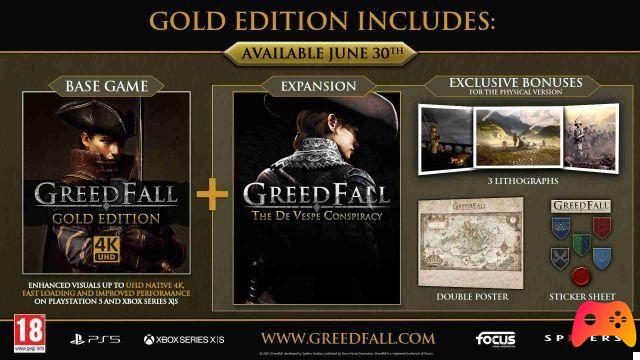 ► Greedfall is an RPG type game developed by Spiders and published by Focus Home Interactive for PC, PlayStation 4 and Xbox One, the video game was released on 10/09/2019Greedfall is a beautiful game that cannot be missing from your collection: we have decided to evaluate it with a 85%, if you are interested in learning more you can read the Greedfall review

Add a comment from GreedFall: Gold Edition lands on Next Gen