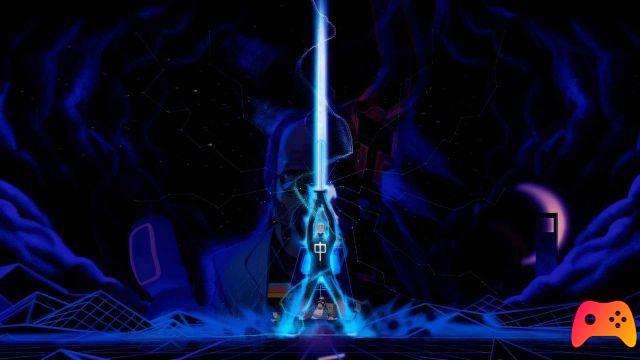 Review for narita boy. Game for Linux, PC, Mac, PlayStation 4, Xbox One and Nintendo Switch, the video game was released on 30/03/2021

Since the appearance of the first electronic calculators, long before there was a PC in every home, the world behind the screen, in its unreachable and apparent coldness, has always aroused great fascination. 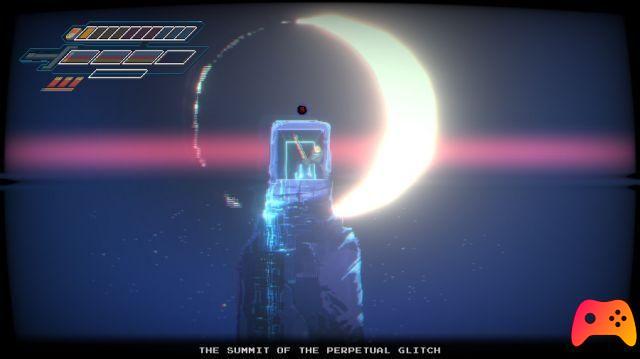 The creation of software with which to operate within the virtual world has made nerds and enthusiasts travel with fantasy and imagination, making the world inside the computer a new setting for stories and adventures, in particular in the cinematographic field. The imagery that has come to be created by fishing with both hands from the very first and rudimentary graphical interfaces thanks to which it was revealed, even to those unfamiliar with code strings, an imaginative and stroboscopic world made of pixels, electrons and logical operations.

From the cyberspace of Cyberpunk 2020 to the virtual world of Tron, up to the Matrix and Ready Player One, the virtual world has received countless representations in multiple media, often tying itself mainly to the technology and symbolism of pop culture of the 80s and amalgamating it all with enormous doses of nostalgia. This is where the so-called vaporwave is born: a style of visual and sound art composed mostly of polygonal landscapes, bluish fuchsia colors and slow electronic sounds. 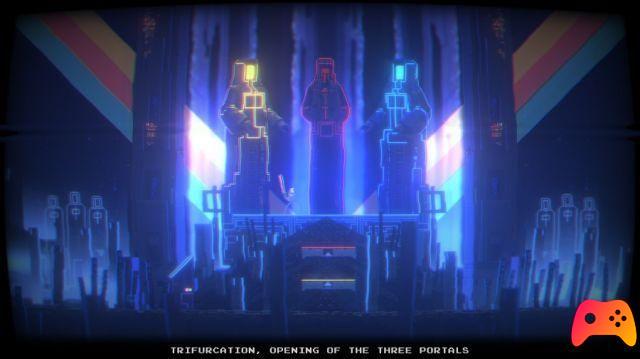 The works inspired by this nostalgic and retro futuristic vein are now countless, but we never expected to find such a successful and effective representation in this Narita Boy. Not for nothing, it is thanks to the artistic talent of the Spaniards of Studio Koba that the game has managed to earn the trust of over 5000 supporters on Kickstarter, of a historic publisher like Team17 and of a Microsoft that has quickly included the work in the Game Pass since day one.

Yes, because in Narita Boy there is really everything that can make any fan of this art style go into jujube soup: from an excellent CRT filter to vector landscapes, from synth music to continuous references to retro and Asian culture. You will therefore have understood by now that the excellent artistic component has managed to strike and bewitch us, but even the gameplay - in particular the combat system - is able to entertain and give great satisfaction. But let's go in order and let's start with the protagonist: a nerd like so many intent on getting a wash of his head because he spends too much time in front of the computer ... Sounds familiar? 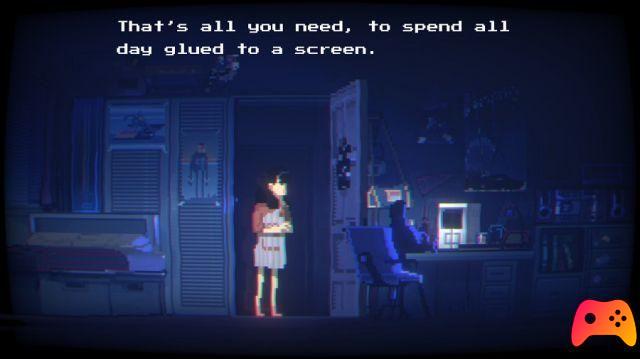 Ma when the Digital Kingdom calls there is no grumpy mom to hold and our hero will find himself catapulted into the computer ready to wield the techno-sword and restore order. Much of Narita Boy's aesthetic is based on three colored beams: that yellow, blue and red that give color to the game logo, the techno-sword, the three main worlds and countless graphic effects.

As Motherboard, mother of every program of the Digital Kingdom and our far too long-winded guide, will explain to us, the three beams of light make up the Trichroma, an emanation of the source code of which the kingdom is written. Each bundle originates from a subsystem: the yellow beam emanates from a simulation of the desert, the blue beam represents the land of eternal rain and the red beam regulates the whole balance of the Trichroma. It is from this latter realm that HIM's rebellion has started, the program dedicated to the elimination of old data that, with its army of programs called the Stallions, has taken control of the Digital Kingdom. 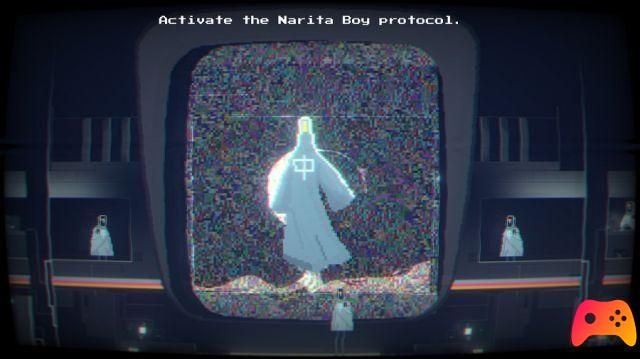 Unfortunately, the first hour of the game goes all like this: between too long dialogues entirely in English and the search for floppy disks useful for unlocking doors, where instead you would just like to show off your cool techno-sword and lead your hands. Don't give up though: despite the particularly slow start there will be many opportunities to make good use of both the sword and the skills that we will gradually unlock. In fact, the game difficulty gradually increases until reaching levels that are quite satisfying and challenging but never prohibitive.

Thanks to the fluidity of the animations and the large amount of shots made available to Narita Boy, the combat system is particularly satisfying especially in the more advanced sections of the game. Here, the various key combinations necessary to activate the skills, combined with the increasing level of difficulty of the clashes, will be able to fill the slowness of the first hours making the game finally fun and satisfying.

In addition to light and heavy sword attacks, Narita Boy will be able to perform upward, downward strokes and lunges which will also prove fundamental in the platform sections. We will soon add to our arsenal too a firearm equipped with three shots that recharge over time with which it will be possible to fire one bullet at a time, or to use all three cartridges to generate a large laser beam capable of dealing great damage. 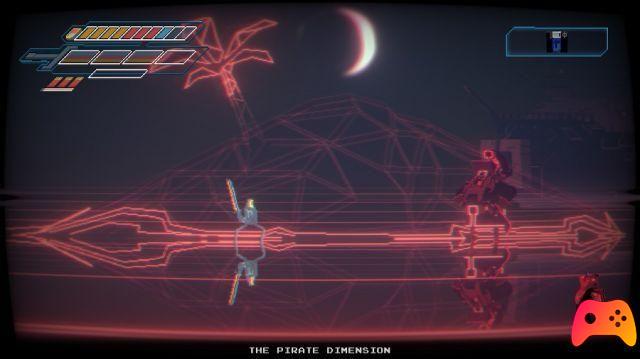 By pressing a button you will also be able to recover some health consuming slots of a special bar that will fill up as we inflict damage. The time it takes for this skill to be completed it requires finding the right space and timing within the confrontations, worth getting hit and losing more energy than you are trying to recover. Within the fights there is also one elemental-like component in the form of some opponents with a colored flame above the head, whose color will indicate the affiliation of the enemy to one of the three colors of the Trichroma.

Well, if we find ourselves in particular difficulty in a confrontation, we can charge our aura the same color in order to unleash particularly effective attacks against them, however, suffering in turn extremely increased damage. As if that were not enough, in this vast set of possible attacks evocations also find their place capable of unleashing devastating attacks based on one of the three colors. Shovels and dodges complete the offer, able respectively to unbalance the enemies or avoid their hits at the last moment. 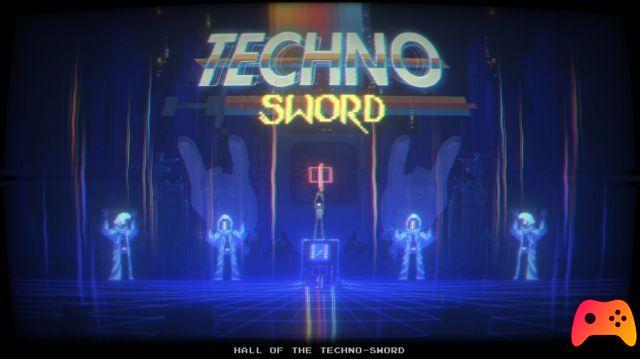 In short, a huge range of skills that, combined with the huge amount of different enemies, are able to make the fights particularly frenetic and with a good dose of tactics.

But it is the enemies that have struck us the most and represent one of the greatest merits of the entire work, both visually and in the approach that we will have to adopt in order to defeat them.. The aesthetic inspiration is one mixture between medieval and futuristic; then appear soldiers, skeletons, witches, sorcerers and necromancers, each of which has its own set of attacks and parries. Unfortunately, the care taken in characterizing the fighting style of the various types of enemy is quite fluctuating: some of them in fact require dedicated study and counterattacks, others are instead left at the mercy of the most vulgar button smashing.

The NPCs, however, are not far behind. The digital world is teeming with life and populated by an array of extremely beautiful and well-characterized characters. Impossible not to mention Synth-Sensei: a sound composition program that will show itself as a great being connected to huge synthesizers. 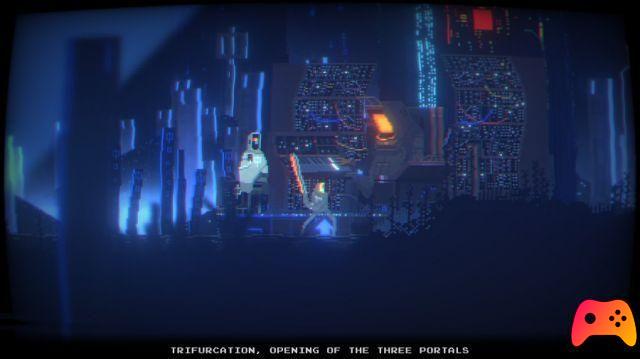 If then the combat system is generally successful (especially in the more demanding sections) the level design represents the weakest point of the whole game. Most of the screens are in fact simple corridors that we will have to cross and which often do not present anything else of interest if not a wonderful backdrop. The platforms and walls on which we will be able to climb represent a rather negligible part of the experience, both quantitatively and in terms of difficulty, thus making the exploration extremely linear, simple and therefore not particularly interesting. All this comes with one dowry almost absence of secrets and collectibles (relegated to only a handful of optional floppies), which makes the already completed sections a huge empty wasteland, eliminating not only backtracking, but also any stimulus for replayability.

Narita Boy therefore remains valid for no more than the 8 hours that serve to complete it, after which it is completely devoid of valid reasons for a second run, beyond the individual will to return to immerse yourself in the wonderful atmosphere of this beautiful virtual world.

Narita Boy is a glorious tribute to the fabulous 80s and to the vaporwave and synthwave style, capable of proposing a rear view of virtual reality with an excellent artistic choice. Although it struggles to take off during the first hours of the game, when it kicks off the title is fun thanks to a satisfying and well-thought-out combat system and a huge series of excellently designed enemies with their own specific fighting style. The main problem unfortunately remains a minimal level design that makes the experience extremely linear and deprives it of any secret that goes into motivating replayability. Net of the defects, Narita Boy remains a more than valid title that will not fail to fascinate anyone who loves the retro futuristic style of the 80s. If your dream is to surf a virtual sea standing on a floppy disk, while a pixelated eclipse stands out among vector mountains, please add a point to the final vote.

► Narita Boy is a Platform-Adventure-indie game for Linux, PC, Mac, PlayStation 4, Xbox One and Nintendo Switch, the video game was released on 30/03/2021