Over the years, Ni No Kuni has become a franchise that goes beyond video games. Literally it means "Second Kingdom", and tells of a parallel world in which each of us has a correspondent. Technically it has six titles, two of which are main, and a film available on Netflix that allowed the general public to know the Level 5 creature, the same developers of Professor Layton, Yo Kai Watch and Inazuma Eleven.

The Ni No Kuni have also attracted attention for the illustrious names who helped create The Threat of the Gray Witch, the first chapter. The former dealt with the animated scenes, the latter with the soundtrack, respectively Studio Ghibli and Joe Hisaishi, heritage of Japan.

The success of the first one then generated a sequel, in several quotes since it has the parallel world but not the characters in common: Ni No Kuni II: The Destiny of a Kingdom. This, like its predecessor, was brought up by Konami Nintendo Switch, an ideal and friendly place for fairy tales of this genre.

If Ni No Kuni touched our heartstrings through Oliver, little boy looking for his mother, in this instance the protagonist is Evan, a half-human, half-felinid young prince who is forced to flee with his tail between his legs from his own kingdom due to a coup d'etat hatched by Ratoleon (a mouse, of course). Evan is an optimistic and benevolent ruler who always sees the glass as half full. In fact, he will decide to exploit the regicide's greed for to found a kingdom characterized by the absence of conflicts. It will be there to help him in his utopian vision Roland, an important man of our world who is mysteriously teleported to Gatmandù following a terrible explosion. The two will soon be joined by Solario - the Lucciconio of Ni No Kuni II, complete with a Roman accent that soon clashes with the setting - and other members.

The comparison with Ni No Kuni is self-evident, especially to those who liked it and would like to find those atmospheres in the second chapter. Unlike The Threat of the White Witch, The Destiny of a Kingdom has an action nature, rejecting the turn-based one of the predecessor. To testify this change not just, too Familiars have been removed and replaced by Cioffi in battle. 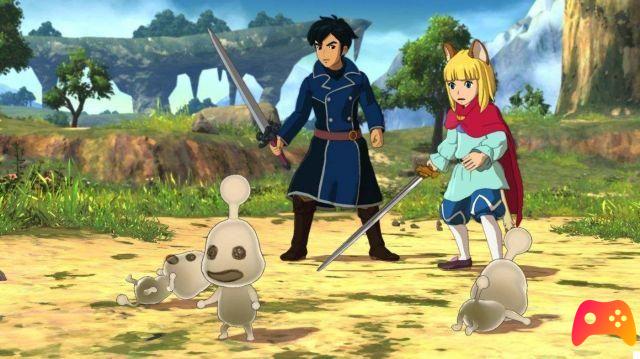 The Cioffi are natural creatures very similar to the Kodama of Princess Mononoke and the Nerini of The Enchanted City. They break down into elements and passively assist Evan and company during battles with the creatures of Ni No Kuni II. If in the first the Familiars were a fundamental part of the gameplay, here the component Gotta Catch 'Em All feels less: Cioffi are adorable, but they offer more or less dubious support, nor is it very clear how they work; the lion's share goes to Evan, Roland and the other allies who, armed with swords, hammers and bows, attack, defend and dodge in real-time combat. Despite this, looking for the various Cioffi Idols hidden among the game's maps is a great challenge, especially since they have to be satiated with objects to guess. The prize will be a brand new little creature, to be added to your party up to a maximum of four. Also present are the abilities - that is the spells, which we feel have been more abandoned in this sequel, or rather less justified than in Ni No Kuni. 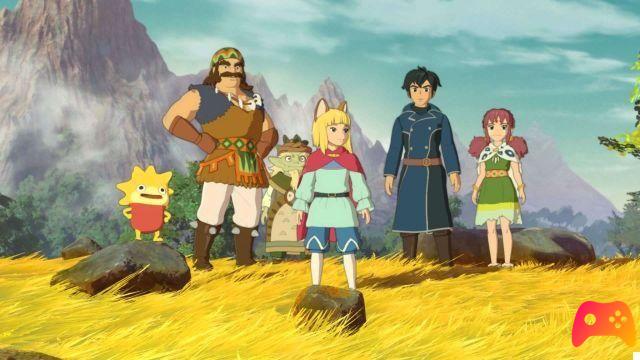 At first glance, the fight might seem very simple. The game itself has been criticized for being too easy, so much so that one of the DLCs featured in this complete edition has added two additional difficulty levels. On closer inspection, however, it turns out that at decent difficulty the spam of sword slashes leads nowhere and that the magic is limited. That the enemies have weaknesses, although they are not clearly spelled out as in Ni No Kuni (the lack of the Abbecedario hurts the heart) and that the Equalizer function in the menu allows you to customize each battle, from drops to resistors simply by moving the levers. We must also take into account the artificial intelligence of our companions, decidedly deficient and turns to attack without hesitation. Unfortunately there is no ability to change characters in battle (except upon his death), which must be pre-selected as a Leader from the game menu before plunging headlong into the mushy and draconic monsters that Ni No Kuni 2 has to offer. , and the level up was graphically clearer in the first. 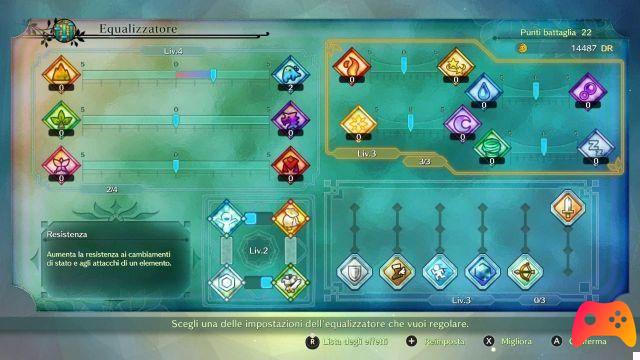 We could say that Ni No Kuni II encompasses three genres: Action RPG, management and Real Time Strategy. What is most striking about the game, in fact, is certainly hers vastness and quantity of things to do. A kingdom is certainly not built in a day, but it will have to be built. Here is the management element, the "Create" a kingdom from scratch and breathe the breath of life into it through all the activities that make a realm such - from the market to an armory, passing through the magic laboratory and various guilds that cultivate or excavate materials.


The goal of this component of the game is to help Evan fulfill his dream, build a place that you can call home and return to, make people happy and take advantage of activities to improve weapons, armor, learn new spells and even create new ones. Cioffi. All this place that you have the Talents, a nice way to call the subjects who choose to populate Eostaria with particular affinities with the activities, aimed at making them grow and get more and more gameplay side. Talents are recruited through secondary missions and other modes that will then be revealed in the game as you advance, while Research, or the expansion of new arrows to be included in our bow - Quality of Life improvements, more powerful spells, etc. - requires actual game time which can be accelerated with real dorados, which are generated automatically, or by putting the console in sleep mode. 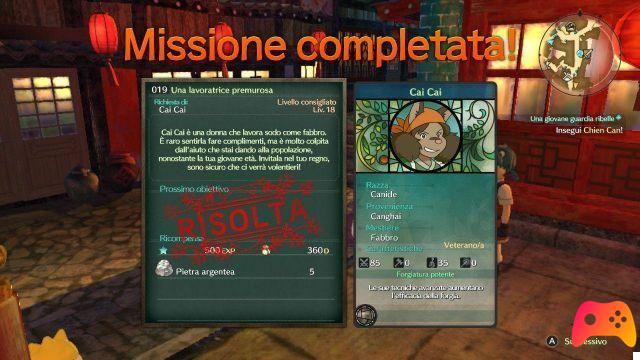 The management part is perhaps the least successful. They are the so-called Pitched Battles, which foresee a fight between our troops and the opposing ones in the open field stylized as chibi, exactly as the characters appear in the overworld. The goal is to break through enemy lines through simple attacks or various commands, such as skills linked to a single character or to King Evan himself, to obtain rewards that are not always useful for crafting (emblematic of a portion of fresh cream received). The Pitched Battles could certainly have been deepened more, as there is a lot of automatic in their management.

They help to extend the hours of play i Dream Labyrinths, a secondary mission that will be entrusted to us at the beginning of the game and will open the doors of dungeons which, to make an exaggerated comparison, recall the Chalice Dungeons of Bloodborne. They are places characterized by a difficulty counter that increases with the passage of time. The higher the level, the more the level of the enemies contained within it will grow and become more difficult. To lower the increasing difficulty it will be necessary to offer a greedy statue of the particular pink spheres. The inevitable boss closes the Labyrinth, holder of one of the nine pieces needed for the final part of the quest. 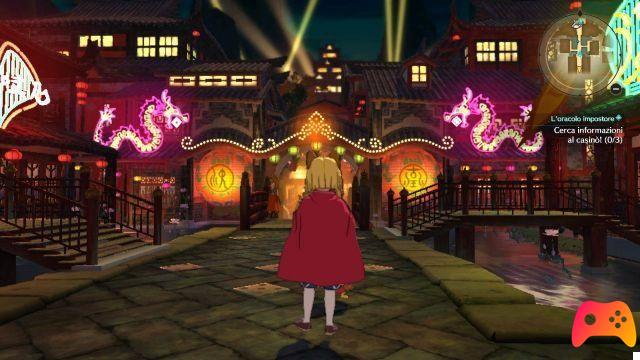 Ni No Kuni 2: The Destiny of a Kingdom is proposed on Nintendo Switch in its Prince's Edition, an edition that includes different contents: the Labyrinth of the Phantom Sovereign, an extra adventure for Evan with a new dungeon, the Labyrinth, in fact, and The Legendary Book of the Wizard, which marks the return of an old friend from the first chapter and centers on the game's other protagonist, Roland. The circle closes theAdventure Pack, a DLC (free at the time) that added the other difficulties, items and bosses. All these contents are considered end game. 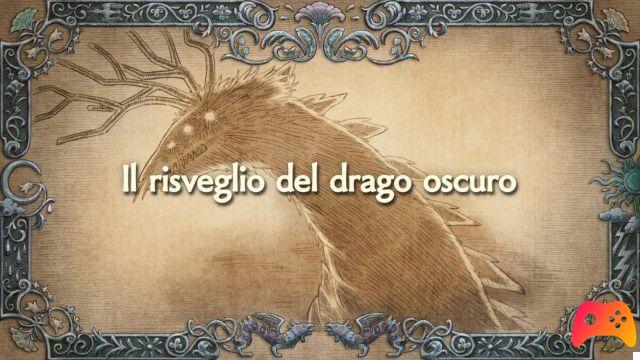 The game runs fairly well on the Nintendo Switch, without frame drops, although we preferred it more on the familiar big screen than in portable mode. In TV mode it is there is no doubt that Ni No Kuni 2 shows some grainy parts, but we challenge to do the Pitched Battles in portable mode by booking with the ophthalmologist. It must be said instead that the management of the kingdom of Ni No Kuni 2 lends itself to portable gaming sessions becoming an unusual relaxing activity.

Although Studio Ghibli's own collaboration with Level-5 ended with The Threat of the Ash Witch, the Ghiblian atmospheres permeate the title. Joe Hisaishi's music continues to be the added value of the series, very typical. The maestro returns from the first chapter with a barely prestigious curriculum: he signs the soundtrack of Nausicaä del Valle del Vento, Totoro and Howl's Moving Castle to name but a few, and brings into the game songs that are sometimes triumphant, sometimes gloomy depending on the occasion. , but some tracks are too intense and dramatic for the context. A striking example is Val Serpentina (Cloudcoil Canyon in English), which has suddenly high moments. Yoshiyuki Momose, former member of Studio Ghibli (A Tomb for Fireflies, Porco Rosso and much more), also took part in the project, collaborating as character design here and as director of the film Ni No Kuni, which certainly helped in building the Second Kingdom and trace its fate. 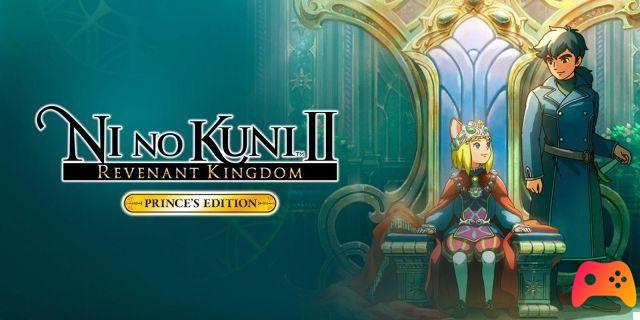 Ni No Kuni 2: The Destiny of a Kingdom offers a more rosy, exquisitely unreal and fairytale storyline - few would blindly follow a preteen in founding a kingdom with all the trappings - and it differs enough from the first to have its own identity. Those arriving from the first Ni No Kuni will find an Action RPG game with Cioffi instead of Familiars, and with different game modes to make it boundless, how to manage your own kingdom. There is the shadow of the Studio Ghibli and the fantastic spirit that characterize the series and, while the soundtrack is not perfect, it is another Ni No Kuni that is worth discovering on the Switch, especially in its full version.

Little Nightmares: Secrets of the Maw: The Depths - Review