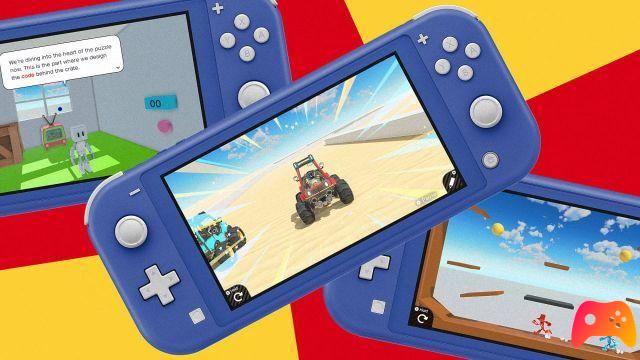 Videogames laboratory is a Nintendo title that will be released on June 11, 2021 on the Nintendo Switch and Nintendo Switch Lite platforms. What makes this new title of the Japanese company special is the fact that it will not be a mere "video game" but will give the basis for understanding what is behind the development of a title. What holds up our favorite medium? Programming. Yes, because among the many roles that make up a development team, one of the most important is certainly programming. Without it, our protagonists wouldn't move, they wouldn't attack, they wouldn't do anything at all. So, with Videogames Laboratory we will be able to literally create our own little video game thanks to Nodons. But no more chatter, here's what you can do within the "game".

Learn the basics of programming

Every game we have in our hands has an essential element: programming. Videogame workshop will allow you to learn while having fun what's behind the movement of Mario, Luigi and all the protagonists we love so much. Of course, you don't need to be a programmer to play this title, but you can also start from scratch. Videogame Lab has a “tutorial” mode in which it will teach you everything you need to know for through lessons understand the basics of programming, albeit greatly simplified. 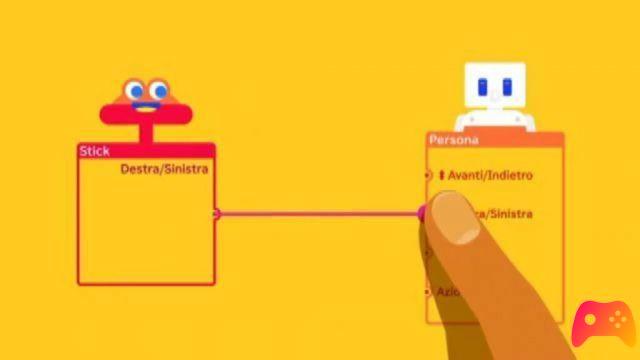 In fact, to meet even the youngest players, Nintendo wanted to create Nodons, which are nothing more than "collectors" of functions. We have one for the character, one for the various inputs, one for the objects. In short, we will have everything we need to create our first video game. Lessons last a certain length and have checkpoints, so you can stop and start where you left off. Perfect especially for those who prefer to play on the go. In addition, there will also be tests to be done, which they will test your programming skills.

A useful way to not just listen and do what you are told, but you will also be tested. As a tutorial you will have to build 7 titles all different from each other and that will introduce you to different concepts of building a video game. We will go from "how to jump and move your character" to "how to add platforms". All this will be possible through a narrator named Bob who will teach you step by step what the Nodons are, what to use to do certain things and, above all, how to connect them. Yes, because having a "control" Nodon and a "Person" won't help, if they do not communicate with each other. As you well know, it is precisely the controls (and therefore the inputs) that we give to the protagonists what allow their movement, but if the controller does not communicate with the "movement" function, then it will be impossible to play. 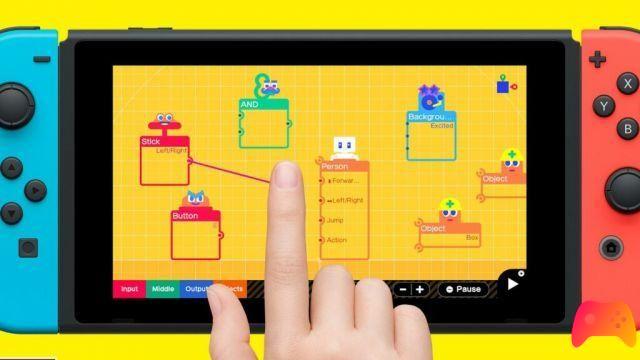 Videogames Laboratory starts from here, and then becomes more and more complex, until it allows you to create games in total autonomy, unleashing your imagination and desire to create. Of course, if you are already a programming expert, the title will also give you the opportunity to skip the guided lessons completely and jump right into the action. But since this isn't actual programming anyway, it's always best to check out how Nintendo wanted to handle things.

From a technical point of view there is not much to say. The title also runs very well on Nintendo Switch Lite and the fact that it uses the touch screen is something that should be appreciated for the immediacy and intuitiveness of use. Mostly because it improves the quality of life. Yes, because when you have so many programming “layers”, being able to see the whole by pinching the screen is something unique. Obviously the same cannot be done if you play with the console in-dock. But it is still possible widen and tighten the screen using the Joy-Con.


The graphics are a mixture of 2D and 3D, since when we program we will go to 2D, while when we are in-game, the world around us will be three-dimensional, at most you can reach 2.5D, in case you want to create a platform . We have not found any particular problems or bugs, and it is indeed to be rewarded the speed with which the Videogame Laboratory manages the uploads.

The soundtrack goes with everything we do, even if it is never too intrusive. In this case we appreciate the choice, as we will spend a lot of time reading and creating, and having music that hammers in our ears would not have been the best.

Is it worth buying Video Game Lab? Our answer is: yes, but only if you are interested in the subject. Creating a video game can sometimes be frustrating and you need a lot of passion to be able to overcome certain walls. So if you want to have a field where you can free your imagination, wherever you are, you are in the right place. Plus, it's also a great gift for kids who are passionate about technology and video games, who may already be learning the basics of programming and finding out what's behind their favorite video game.

Do you want to be an expert and know all the tricks, guides and secrets for your video games? Epictrick.com is a group of video game enthusiasts that want to share the best tricks, secrets, guides and tips. We offer the best content to be a source of useful information, so here you can find guides, tricks, secrets and tips so you can enjoy your games to the fullest. Are you ready to get all the achievements of that game that you resist so much? Enter and enjoy your favorite video game to the fullest!
League of Legends: “Arcane” is the brand's new animated series ❯

Call of the Sea - Review