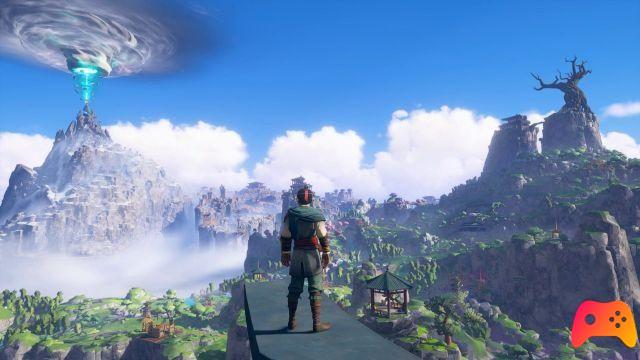 Two months have passed since the release of the first dlc "A new divinity" (here you can find our review in case you missed it), which ended the story of Fenyx that began with the excellent Immortals Fenyx Rising. But now the time has come to change history, setting, protagonist and mythology: Ubisoft in fact with "Myths of the Eastern Kingdom " takes us into fascinating Chinese mythology.

Will this second DLC have managed to maintain the very high levels of the main game and the previous additional content? Find out in our review! 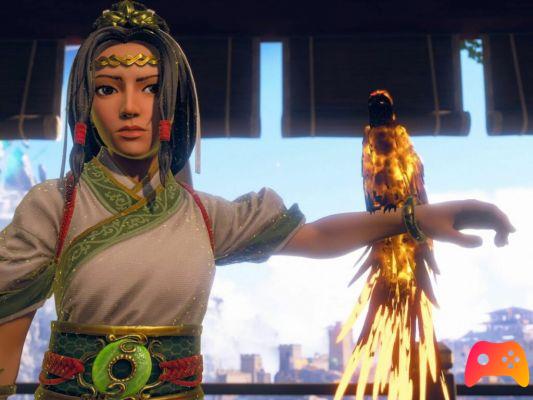 Waking up in a cave with his petrified companions in front of him (yes, exactly as happened to Fenyx), Ku will have to try to understand what is happening. From the very first moments of the game, our protagonist receives the help of the goddess Nuwa, who according to Chinese mythology is the creator of the human species. Our hero's aim will be to restore balance to a world overwhelmed by chaos. As also in Immortals Fenyx Rising, this DLC features a fairly simple storyline but that nonetheless manages to entertain and entertain for all the five hours it will take to complete it. The first difference that you notice with respect to the main title is the tone of the story, which maintains a fairly light style, but it tends to be slightly darker and more serious, leaving more room for the dramas and reflections of the characters. Characters who also contribute to presenting the world and the mythology of reference to the player, certainly less known than the Greek ones of Immortals Fenyx Rising. 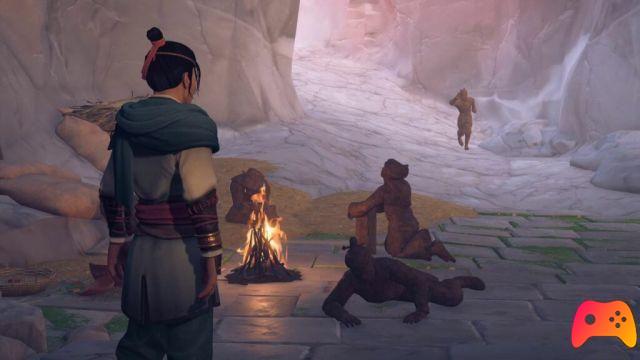 After taking the first steps in the new game world and defeating the first enemies, one immediately realizes that the gameplay structure has remained almost identical to that of Immortals Fenyx Rising: we will then find a good mix of combat, exploration and environmental puzzles. Obviously all contextualized within the new setting, so we will have weapons of the Chinese tradition, structures and constructions inspired by oriental architecture and new mechanics for solving puzzles. The map is once again quite extensive, full of activities, places to explore and secrets to discover that could keep us busy for several hours after the story ends, even if everything is understandably reduced and scaled down.

The DLC also offers the counterparts of the Crypts of Tartarus, or the ruins of Tian: places accessible through portals within which we will have to solve various environmental puzzles in order to obtain the Celestial Agate (Zeus' Lightning). The latter will serve us to enhance the stamina of Ku, as well as the crystals of Xi Rung (Ambrosia) are useful for increasing its maximum life. The upgrades also take place here in a central Hub, which will be the base of Ku and his fellow adventurers. On the gameplay side then there are no major variations from the main game - if not some moveset of the protagonist and some enemies, to which some new enigma is added - which however allow the title to obtain a personality of its own.

If there is one thing that made us turn up our noses, however, it is precisely the setting: we would have expected a greater effort from the developers to create a world that differs from the one seen in Immortals Fenyx Rising. Unfortunately we found ourselves instead faced with a large number of recycled assets, which make the game world, at first glance, very similar to the Golden Island. Even the roster of enemies and creatures can be defined as a simple and very banal reskin of those already encountered in Immortals Fenyx Rising. We would have liked to see some more references to oriental culture, but the truth is that we often forget that we are in China.

This "Myths of the Kingdom of the East" must be taken for what it is: a DLC that is added to the greatest work Immortals Fenyx Rising. Despite this it manages to be fun and entertain for a good number of hours, also thanks to some new mechanics and some changes in the gameplay. More could certainly be done with regards to the setting and the enemies, which seem to be simply carried over from the main game in this DLC, with only minor cosmetic changes. Overall it's worth playing content, especially for those who have loved Immortals Fenyx Rising and want to immerse themselves in its world again.

Do you want to be an expert and know all the tricks, guides and secrets for your video games? Epictrick.com is a group of video game enthusiasts that want to share the best tricks, secrets, guides and tips. We offer the best content to be a source of useful information, so here you can find guides, tricks, secrets and tips so you can enjoy your games to the fullest. Are you ready to get all the achievements of that game that you resist so much? Enter and enjoy your favorite video game to the fullest!
iOS adds support for PS5 and Series X controllers ❯

Add a comment from Immortals Fenyx Rising: Myths of the Eastern Kingdom - Review