Lost Words: Beyond the Page - Review 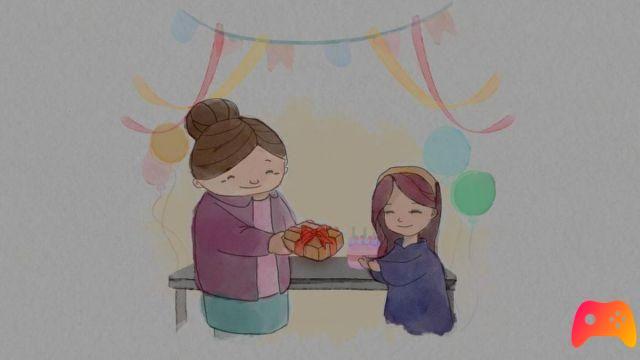 Lost Words: Beyond the Page is the story… of two stories. Lost Words is the story of an end… and a new beginning. Lost Words is about someone… speaking to everyone. They are scattered clues, very abstract concepts that you will find it hard to place in the concavities, of their own shape, that this title has been able to dig into the writer, but by now you know it, every video game is in a certain sense a journey, and a review can only respect and reflect this nature, even while he puts it under the microscopy of criticism. Staying on these terms, Lost Words is a double journey, something that now can leave you neutral but that the next moment pulls you an unexpected curve ball and gives you a tear or, why not, a smile.

This is the primitive power of stories and this is the modern tradition of video games, and Lost Words draws on it fully, but, as always, let's start from the beginning. 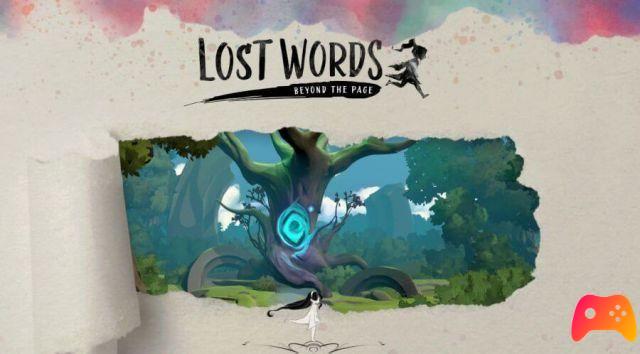 Lost Words is the debut title of Sketchbook Games, a group of game developers with a particularly well-known name, among the 10… indeed, a surname: Pratchett. Clearly it cannot be Sir Terry, but we assure you that, so to speak, it remains in the family, because we are talking about Rhianna, the daughter of the well-known fantasy writer. Active as a videogame writer since 2004, she is the mastermind behind some of the game stories of recent years, just to mention Mirror's Edge, Heavenly Sword, Tomb Raider and its sequel Rise of the Tomb Raider; you may have noticed from the titles we have mentioned, Rhianna is able to write strong protagonists, constantly moving away from the now old and rotting remnants of the culture that saw in supporting actors only "princesses to be saved" or, even worse, objects deliberately created to arouse and attract the libido of gamers.

In Lost Words the protagonist is again a girl, Isabelle, but this time our alter-ego is younger than the heroines of the aforementioned titles, even if she remains absolutely independent and self-sufficient in the training journey through which we will accompany her.

Isabelle is a girl who, like many of us, has a creative side that does not want to be silenced, a fire that she begins to pour into a diary, catalyst not only of the story she wants to write, but also of our modus ludendi in hers. comparisons. Every word she pours into the diary is in fact for us a platform that protects us from the free fall of a blank page; yes, platform, why Lost Words is first and foremost a platformer, identity that the title sews on itself in the early stages of writing in the diary and of which, voluntarily or not, it will never undress too much.

Lost Words is a platformer, of course, but that's not what the challenge wants to bring us, it makes it clear right away with the removal of the possibility of "dying" in these sections: falling on deaf ears, we will simply find ourselves at the beginning of the first sentence written on the page, safe. 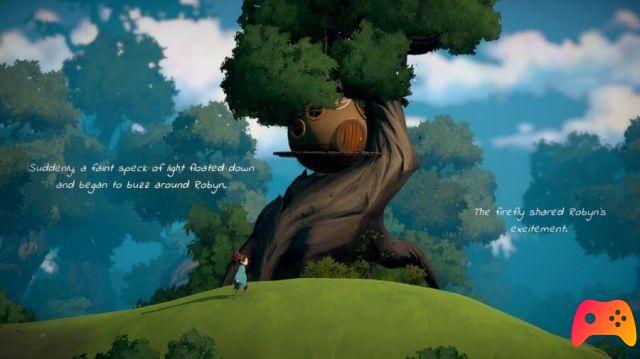 After the introduction to the story of Isabelle, which we do not think is right to spoil you in any way, we are introduced to the other side of the coin, at the level of game mechanics: if the open diary sections carry on the narrative train, creating, however, sentence after sentence, a sense of challenge practically negligible, Isabelle will soon be catapulted into a fantasy world she creates that will amplify some of the simple initial interactions.


If the sections on the diary can give you some vibrations from Edith Finch or Unfinished Swan, the part of the game set in Estoria, the land created precisely by the protagonist's imagination, takes inspiration from several other titles, here with a tree that is so reminiscent of Ori's. and the Blind Forest, there with a descent into the sands very reminiscent of Journey. 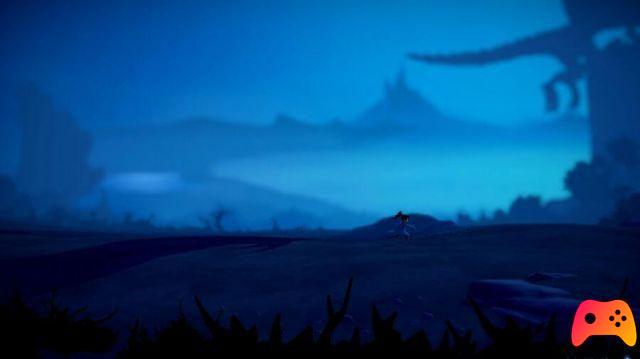 The references are wanted, without too many doubts, but it is this choice that, although justified given the importance of the reference titles, ends up depriving Lost Words of its identity, at least in the sections within Estoria.

The result of the simpler platforming sections that take place directly on the pages of the diary is different, since, even if they do not offer too much originality in the jump mechanics or particularly memorable interactions with the "platform-words", Shows, in the use of watercolors and drawings, the side of a creative undergrowth, at the Concept level, which is difficult to ignore: the way in which some subjects or colors will fill the diary and your screen is really pleasing to the heart. and eyes, a worthy complement to music that, while not defining itself as memorable, does its job well, supporting the emotional weight of what the player reads and faces from time to time. 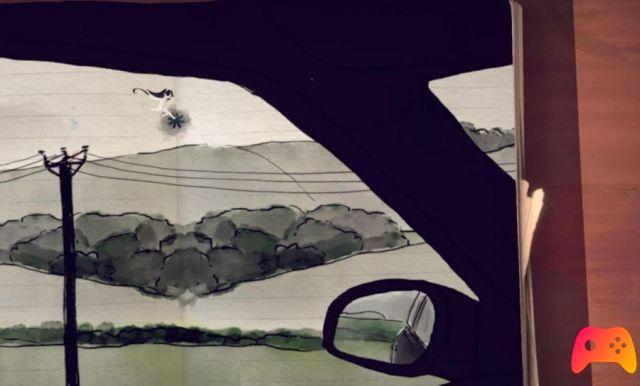 As mentioned above, we do not want to spoil the narrative plot of Lost Words too much, but just know that it is the story of a cut off by death, that "End" with a capital F from which many of us run away, with thoughts, with attitudes or even just with the desire to give the world and affections a legacy to treasure.

For the human mind the word "End" is never easy to understand and accept, we would often like that evening, that holiday, that moment of happiness never end, and the thing is enormously amplified in the sounding board of Life in general, when that "End" indicates a mourning, a farewell to which we are obliged but which it always seems too far ahead of what we would like, a clean cut of the emotional creepers that bind us to the people who fill our lives and that when cut seem to backfire, scratching us and not making us breathe.

There is always one more thing we wanted to say, something we would have liked to do with them, and we feel deprived of this possibility. 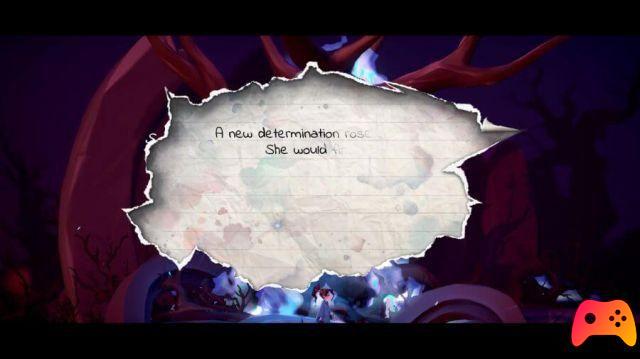 Our Isabelle does not experience all the stages of mourning, indeed Lost Words focuses more on anger, depression and acceptance than the others; it will not be an easy path, but we will be there to accompany the protagonist, and not only: in the phantom search for the protective fireflies of our village, we will find ourselves meeting grumpy Zen masters, merchants with strange offers, volcanic beings full of unspoken anger ... and a dragon.

We do not want to take away the merit of the adventures that Estoria gives us, but the constant perception has been that the words in the diary, those moments of reflection by Isabelle, those very simple platforming sections, are those most able to express the identity of the game, to narrative and emotional level; it is in these sections, especially in some of their more intense phases, that we found ourselves crying while reading the words of the girl, an effect only enhanced by the voiceover, of good quality even if little is done justice when, to listen to the next piece of sentence , we have to physically jump on it with our character.

Words have the power to move us, in their meaning and in the way we give them to the world and to those who can and want to listen to us. 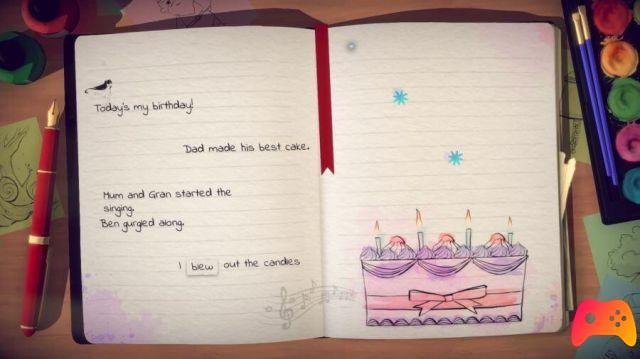 Words have power. It is a concept that human beings sometimes seem to want to leave behind, but which has recently been finding legitimacy. “Words that are no longer used say more about an era than words that are abused”.

There are words that we avoid, with all of ourselves, and words that we use too much, but we must never forget the power they have. Lost Words gives weight to this reality in a very original way: inside Estoria, Isabelle has a book that contains some key words and which exists to all intents and purposes as the only tool for the player to interact with the world; by selecting a word we can create a tangible effect in the world, such as lifting a platform, lighting a torch or rebuilding a destroyed bridge. It is a mechanic with enormous potential, which however is never expanded too much, returning the feeling that the game devs, to allow us users to interact with it, have forgotten to "play" them themselves, perhaps exploring it more deeply or letting it run on less restrictive tracks.

Because after all we must never forget that even the most beautiful things, sooner or later, we must put the word ... end.

There isn't much more we can say about Lost Words without going into spoiler territory, but we feel fully recommending the game. The platforming is very basic, as is the interaction with the words that make up Isabelle's paraphernalia as she travels through Estoria, but Lost Words has something to give you, even if that something was just a tear followed by a smile. If at the narrative level there is nothing completely new, Lost Words is certainly a first timid attempt to introduce something new at the level of mechanics. We just wish the Sketchbook Games team had risked a little more. Lost Words is the perfect demonstration of an adage that is about to get old: if there really are no more new stories to tell, now the world has only to offer us new ways of telling them.

Do you want to be an expert and know all the tricks, guides and secrets for your video games? Epictrick.com is a group of video game enthusiasts that want to share the best tricks, secrets, guides and tips. We offer the best content to be a source of useful information, so here you can find guides, tricks, secrets and tips so you can enjoy your games to the fullest. Are you ready to get all the achievements of that game that you resist so much? Enter and enjoy your favorite video game to the fullest!
Unreal Engine 5 is downloadable in early access ❯

Add a comment from Lost Words: Beyond the Page - Review