The Best Builds for the Monk in Diablo Immortal 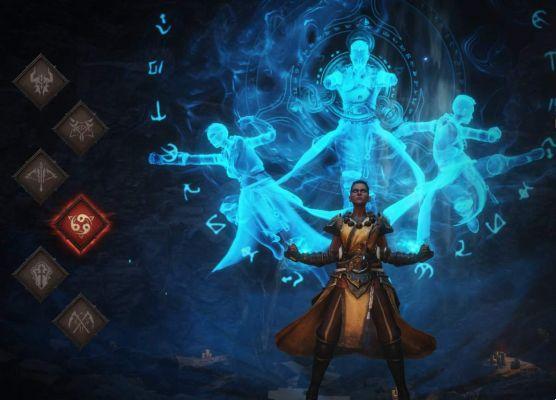 The idea of this build is to make your Monk self-sufficient. This will allow you to clear dungeons and complete all kinds of tasks without needing allies.

Since the Monk is a melee class, the most important attribute will always be Strength. Willpower will increase the duration of your Bleed Weakening and Toughness will increase your Survival.

For Paragons, the ones you should start with are Vanquisher and Survivor. The former will increase your damage while the latter will help you stay alive in battle.

For weapons, there is no better choice than Dragon's Indignation. This primary hand weapon will allow your Seven-Sided Strike ability to continuously burn its targets. For your secondary hand, the best weapon is Eye of the Storm, as it increases the radius of the Cyclone Strike cyclone by 20%.

For set items, we chose Grace of the Flagellant because of the higher raw damage it will give you.


For armor, Breath of Incense is the way to go. This armor set allows Seven-Sided Strike to make the explosive palm explode when killing bloody targets.

The Berserker's Eye, Fervant Fang and Everlasting Torment gems will work together to increase overall damage in various ways.

If you want to destroy all your opponents as fast as possible to level up your Monk as quickly as possible, this build is the way to go.


Mystic Strike will allow you to rush directly at the opponent, which you can then immobilize using Prisoned Fist and then finish using Wave Strike.

The extra health and armor you get from Fortify and Vitality will help you stay alive during battle.

The Feasting Baron's Pack set will be the MVP of this compilation, as it will increase the duration of your rooting debuff by 30% and thus significantly increase your damage against rooted enemies.

The Pain of Subjugation and Shard of Stoned Flesh gems will further increase damage against rooted enemies, while Might and Command and Rejuvenation of Ca'arsen will increase raw damage and attack speed.

For weapons, we chose Power of Ondulation, as it will allow Wave Strike to continuously release waves of energy.


For armor, we chose Isolation's Path as it increases Prisoned Fist's maximum stacks by 1.

And for Heroes, Winner and Survivor are the two Hero trees you'll need for any kind of Monk setup.

The idea of this build is to make your Monk self-sufficient. This will allow you to clear dungeons and complete all kinds of tasks without needing allies.


Flying Kick and Wave Strike will not only deal damage to enemies, but these abilities will eliminate them. Shield of Zen will create a shield for your entire team.

Being able to deal damage, creating space between you and enemies, and protecting yourself using some sort of shield are the three factors you should look for in a build when it comes to PvE use; why these skills were chosen.

Defense is just as important, if not more important than offense, when it comes to PvE activities, so we have chosen Endurance and Will as our main attributes in addition to Strength.

For weapons we have chosen Intermediate Law and Wheel Lightning. The Intervening Law will allow you to deal damage using the defensive skill Shield of Zen, while the spokes of the wheel will grant you your Flying Kick skill to increase all damage by 10%.

For armor, we chose Grace's Bounty. This armor set will transform Flying Kick into Spinning Kick, allowing you to damage multiple enemies at once using this ability.

The Windloft Perfection set was chosen for the increased movement speed and damage it deals, as well as the shield ability you get with 6 elements of the set equipped.

Blood-soaked jade will increase your movement speed, Trickshot gems will decrease the energy consumption of channeled skills, chained death will increase damage exponentially, and Power & Command will allow you to summon minions to fight alongside you.

When compiling for group use, your skills should be useful to the entire team, rather than just you. The purpose of rifts is to eliminate them as quickly as possible, and this is where this group build comes into play.

Cyclone Strike will draw all nearby enemies towards you, allowing your allies to easily hit multiple enemies with their attacks at the same time. Seven-Sided Strike is a great AoE attack and Exploding Palm will deal a lot of damage over time by inflicting bleed.

Fortitude will help you stay alive during battle so you can continue to help your teammates, while Willpower will increase Exploding Palm's bleed power, allowing you to deal much more damage.

For armor we have selected Incense Breath. This armor set allows Seven-Sided Strike to make the Exploding Palm explode when killing bloody targets.

Berserker's Eye will increase your raw damage output, Lightning Core will allow you to perform lethal AoE attacks and Blood-Soaked Jade will grant an increase in your movement speed.

This hybrid monk build is designed to work well in all aspects of the game. It uses the best features of the different builds to become a complete build.

Fists of Thunder will be your main damage ability and will be even more powerful when combined with Seven-Sided Strike. Shield of Zen will be your defensive skill.

Willpower and Vitality are chosen as main attributes in addition to Strength. Willpower will increase the power of the disadvantages you inflict while protecting you from enemy disadvantages. Vitality will help you stay alive by increasing your health.

For the weapons, you must have Dragon's Indignation in your main hand, as we are using Seven-Sided Strike in this version. For the other weapon, choose the one that suits your preferences.

For armor, you should always use Incense Breath when using the Seven-Sided Strike skill.

The Unity Crystal Gem will increase the damage of your team and decrease the damage received by them, so it will be extremely useful in group use. Echoing Shade will give you the ability to create up to 3 clones of yourself to fight alongside you, which will help you a lot in PvE. Finally, Power & Command will increase your raw damage output.

Since the Monk is a melee class, the most important attribute for Monks is Energy . Strength will not only increase the Monks combat score by 1 per point, but it will also increase their damage output by 0.33 per point.

And if your monk setup applies a lot of disadvantages to the enemy (such as bleeding), Willpower will increase your damage by increasing the power of these disadvantages.

The monk's starting skill, Thunderfist, seems to be probably the best skill the monk has. Not only does it have great damage, but it also allows the monk to travel quickly across the battlefield.

Explosive Palm is another great ability of the monk. It is the best crowd control skill that the Monk class has.

Seven-sided shot and zen shield are also some great skills. The former is a pure damage skill, while the latter is the best defensive skill the monk has.

Diablo Immortal: the best weapons for the monk

By far the best weapon for the Monk class is The Dragon's Indignation . This weapon allows the Seven-Sided Strike skill to continuously burn enemies, resulting in an incredible increase in damage output.

Another great choice of fire weapon for the Monk class is Spokes of the Wheel . This weapon grants your flight skill the ability to increase the damage dealt (by all attacks) by 10% for a short period of time.

Finally, Wave Power is another weapon to consider when creating a Monk. This weapon allows the Wave Strike ability to continuously release waves of energy.

The best armor set for the Monk class is Incense Strike. This armor set makes the already overwhelmed Seven-Sided Strike skill even more powerful, allowing you to make the explosive palm explode every time you kill a bloody target.

Grace of Grace is another great armor set for the Mystic class. This armor set transforms Flying Kick into Spinning Kick, allowing you to damage multiple enemies at once using this ability; instead of just damaging single targets.

Blessing of Illumination is a great armor set to use if you are using the Zen Shield skill. It increases your movement speed by 25% during Shield of Zen and allows you to gradually defeat enemies.

Diablo Immortal The best champions for the monk

For the monk class, the best hero trees to invest in are Vinci Tore and Vanquisher. Vanquisher increases melee damage, making it the perfect solution for the Monk.

And since the Monk is all about getting close and staffing enemies, having the trap-death ability from the Survivor tree is extremely useful.