The title of the game we are going to analyze is a synchrasis formed by the words anarchy and cute, which perfectly summarize the work of Anarteam, a small indie studio made up of students making their debut in the videogame market. In Anarcute, the player battles the streets against despotic powers, leading a crowd of cute, colorful pets.

Borrowing the idea behind The Wonderful 101 of PlatinumGames, Anarcute is presented as a three-dimensional action adventure with an isometric view, characterized by the need to control a crowd of characters. At the beginning of each level, the player has a (basically) small handful of animals at his disposal, but the environments hide many companions, to be released or awakened. Increasing the number of rioters does not give the mere advantage of an increased strength, but also the possibility of accumulating more objects, as if we were in Katamari Damacy, to be thrown at enemies and structures (cars, deck chairs, bicycles ... what you find on the street !), as well as new moves and skills, among which the one of taking down entire skyscrapers!

Clearly, the control of a community cannot be as precise as that of a single character, so it should not be surprising that rather agitated situations arise when it comes to coming to blows with the servants of the state, who make use of an arsenal worthy of a G8. . Some of the weapons dropped by the enemies can also be used by the riotous crowd, not only to fight, but also to open some paths by clearing the way of obstacles. All in all, the control system does its duty, but it is certainly not perfect; from this point of view, containing the difficulty has proved to be a winning choice, which saves the player a dose of frustration. 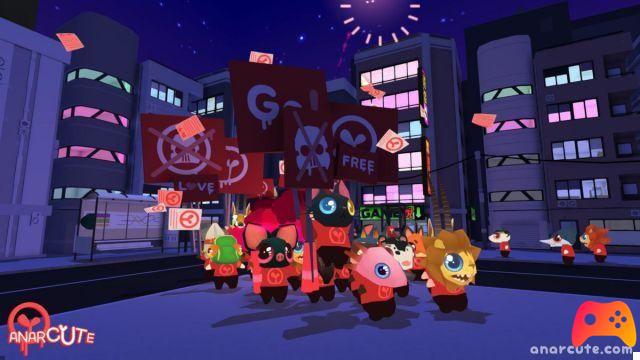 If what has been said so far could suggest a chaotic game, the truth lies somewhere in between. On a structural and level design level, in fact, Anarcute is much more "disciplined": the various cities available (Tokyo, Paris, Miami, Reykjavìk and a secret location for the grand finale) are not open environments, but classic "worlds" divided into levels, characterized by a limited (and delimited) extension. The levels are essentially small but complex dungeons, littered with treasures (made up of allies and objects, in this case), enemies and tiny puzzles. Although it is clear that the purpose of the developers was not to create a large-scale armed revolution simulator, in the opinion of the writer the gameplay is asphyxiated, "trapped" between corridors of skyscrapers and, more generally, in spaces cramped, especially if commensurate with a crowd that can count dozens of animals. The diversification of approaches is also scarce, and this does not happen only because the various animal species do not differ in abilities or parameters (completely absent), but also because the level design, even where it allows different strategies, still highlights one, which it is by far the most convenient. To give an example: I am in a square that allows me to take two roads; in one I find ten allies and two enemies, in the other a mega army; it seems clear to me that I will go to the right, I will collect everything I find and then, if I really am a completist, I will go back to slaughter the cops.

Speaking of completists, Anarcute will try to entice you, but without making you sweat the proverbial seven shirts. At each level, the player will receive a rating (the maximum is S), resulting from the average of three parameters: enemies defeated, crowd size and time taken. To unlock all animal species you need to get the maximum rating in all levels, a result that will also guarantee you a large number of coins to spend to acquire new collective skills. If you do all of this, the road to 1000G is open; otherwise, you can just finish the game in five or six hours. 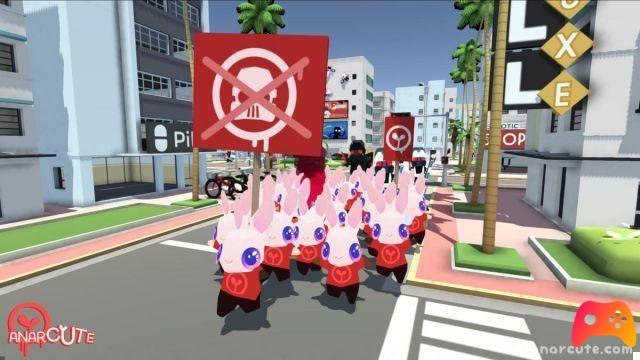 Anarcute is a very nice indie title, which contrasts an extremely violent theme (at least in the abstract) with a very colorful and childish artistic direction, providing the player with an army of tender animals of the most disparate species, but all warriors more than unlikely. The gameplay, albeit with obvious inspirations, manages to have its own personality, which allows us to overlook at least in part some imperfections, which cause a progressive loss of interest with the passing of the hours. With a multiplayer mode, perhaps in co-op, it could have been something more, but even so it can be worth the € 14,99 needed to purchase.

► Anarcute is a Beat 'em up-Simulation-Strategy game for PC, Xbox One and Nintendo Switch, the video game was released on 12/07/2016 The version for Nintendo Switch came out on 30/05/2019

Tell Me Why - Review