The release of the very first Disgaea back in 2003 was Nippon Ichi's first step towards a future that would consolidate it globally as a reference software house for lovers of tactical JRPGs. His most famous series, however, is certainly not his only creature, although it is actually the luckiest and most successful one (even if Disgaea 6: Defiance of Destiny did not fully convince us; you can read why in our review). Several other games from the development team, mostly released during the 2000s, remained largely in the shadows, despite deserving far more attention.

After Prinny 1 • 2: Exploded and Reloaded, Nippon Ichi has decided to continue with his revival of these little-known titles on the Nintendo Switch, hoping that they will finally find a more widespread appreciation, especially from their fans who at the time if they are lost.

Prinny Presents NIS Classics Vol. 1 contains Phantom Brave: The Hermuda Triangle and Soul Nomad & The World Eaters, two tactical JRPGs originally released on PlayStation 2 stylistically very close to Disgaea, but which, each in their own way, proposed variations to the formula.

Phantom Brave actually came out in three versions on three different consoles. After the original, a second was released for Wii titled Phantom Brave: We Meet Again, while Phantom Brave: The Hermuda Triangle is the "definitive" version complete with all the additional content released later for PSP.

The protagonist of Phantom Brave is a young orphan named Marona who lives alone on an island together with the second protagonist, a ghost named Ash. Before losing his life, he had been an adventure companion of Marona's parents, until an evil being known as Sulfur defeated them to death. With his last strength, Marona's father tried to preserve the life of his companions, but only managed to bring Ash back as a ghost. Since then, the spirit of the adventurer has tried to protect the daughter of his old friends as best he could. Raised almost alone up to 13 years, Marona has become a Chroma like her parents, a sort of bounty hunter for extraordinary cases and tending to the supernatural.

Compared to Disgaea, the Phantom Brave story definitely is less light and easygoing; there are moments of humor, but in general it is treated with more seriousness, and contains themes such as prejudice and revenge. Although the basic concept behind the plot is quite interesting, it is clear that at the time (but still deep down) Nippon Ichi had little experience in writing, especially in enhancing dialogue. 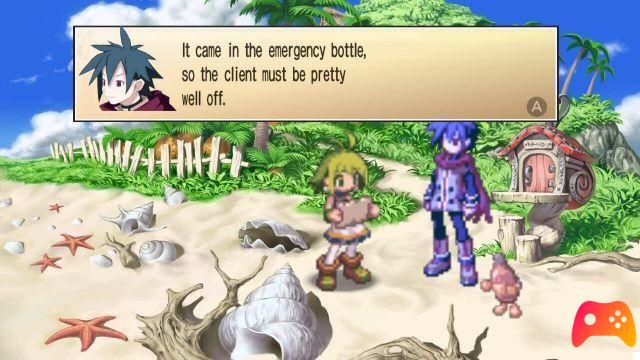 The highlight of the game is clearly the gameplay, which draws heavily on the pivotal elements of Disgaea. The first palpable difference consists in the fact that our group of fighters is made up (almost) entirely of ghosts who will have to be recalled by Marona. She can do this by "confining" them to certain objects on the battlefield such as rocks, trees, plants, etc. Depending on the item, the units will receive personal stats bonuses and penalties. Once summoned, each ghost can only act a limited number of times before disappearing. This makes the course of the fighting very different and even more strategic compared to a normal game of the same genre.

The game arena is not organized in a grid, but characters can walk around it more freely within a maximum range each turn. This is certainly one of the most interesting possibilities in the game, the problem is that it also generates a lot of confusion when many units are close to each other, that is, in most cases. Often you find yourself struggling to make a character move or attack as you want and it will happen by mistake to stack them on top of each other or worse, if you are not careful, to hit an ally.


Another very funny peculiarity is that Phantom Brave allows the characters to use practically EVERYTHING as a weapon. Not only the actual weapons, but also the objects in the arena and the enemies themselves can be lifted and wielded against opponents. There is also an intricate and multidirectional system for the enhancement of fighters and their weapons, which while on the one hand is innovative and can excite fans of this genre, on the other it can create confusion and disorientation for all the others. 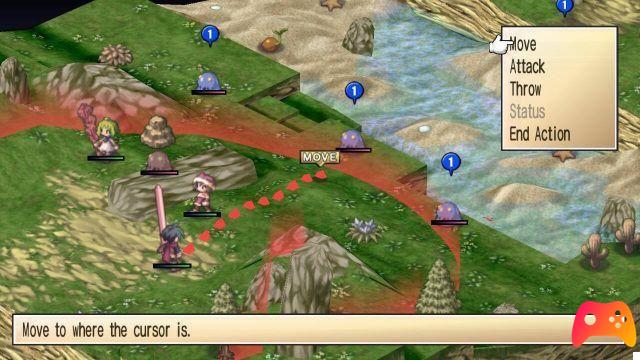 Soul Nomad & The World Eaters represents another attempt by Nippon Ichi to deviate from the purely demented tones of Disgaea and to create a different gameplay formula than usual. The story begins by telling us the harsh events of the continent of Prodesto: after a bitter battle against the forces of evil, the priestess Layna manages to seal the death lord named Gig, master of the giant destructive creatures known as the World Eater.

200 years pass and we are put in the shoes of a protagonist of Soul Nomad whose gender and name we can choose. Arrived at the right age, and after a long training, the same priestess Layna promotes us guardians of the city, entrusting us with a strange sword. Inside is actually kept Gig's soul, which is finally freed by trying to take control. The protagonist, however, manages to stop him and from that moment the two find themselves sharing the same body. Layna's mission is to use Gig's power to destroy the World Eaters once and for all. The powerful spirit, however, certainly has no intention of remaining good and warns us: the more we use its power, the more it will be able to take control of our body.


Even in Soul Nomad there is no lack of moments of humor, usually triggered by the reactions of the arrogant Gig, but Nippon Ichi wanted to package a darker and more complicated story. Overall we can say that the intent has succeeded, albeit in a not very exemplary way. The beginning is a bit stale and too many questions and situations follow one another without too many explanations. As the plot thickens and the questions are answered, the game becomes more interesting, especially during some not too trivial twists.

An interesting gem: after completing Soul Nomad for the first time it is possible to start it again and choose to let yourself be possessed by Gig. This then triggers a run in which you can say goodbye to all your morality and observe the events from the particular perspective of the bringer of chaos in the world. 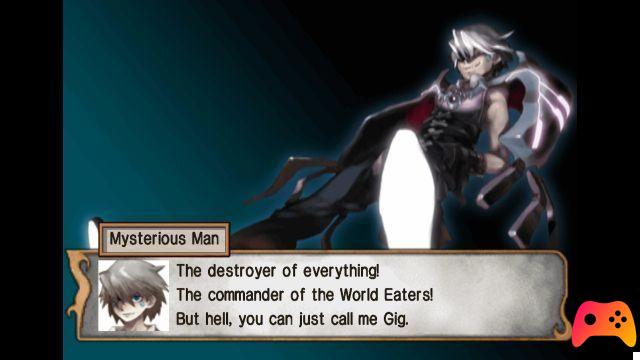 The battle system differs greatly from the usual tactical RPGs. Instead of fighting by controlling individual characters, each unit on the map represents a small troop of 3/4 fighters of various classes organized in "rooms" of 3 × 3 boxes (those who have played Ogre Battle will feel comfortable). The player gives the troop general commands of attack, defense, special technique, etc. after which an automatic battle will be triggered in which we will see the units collide with each other.

It would be long-winded to describe all the game possibilities of Soul Nomad that revolve around the strengthening of your troops. Suffice it to say that, even in this case, lovers of the genre will be able to find a complex system (although not devoid of cumbersome aspects), while the layman could find themselves overwhelmed by the numerous elements to be taken into consideration. 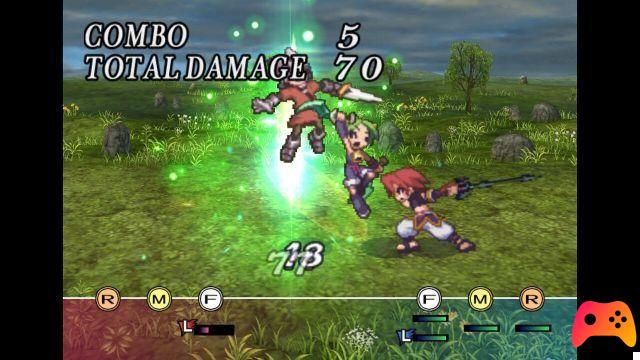 Graphically, both games follow Nippon Ichi's classic style, with colored backdrops on which characters are rendered with graceful 2D sprites with a remarkable level of animation, mimicry and expressive ability. Too bad that it is anyway PS2 game sprites that are squeezed on Nintendo Switch in a very visible way.

The remastering operation could do little to avoid this effect. The only really noteworthy aspect are the wallpapers of Phantom Brave, which in their rendering in HD return in a very pleasant way the artistic quality dedicated to the title, together with the portraits of the characters in the dialogue balloons. Of course the contrast with their stretchati sprites is noticeable, especially in the first hours of the game, but overall the result is decent.

In Soul Nomad the restoration has had its hands much more tied due, obviously, to the basic assets. We are faced with a particular alternation of elements remastered in HD, such as menus and sprites on the battlefield, and others left in SD and adapted to the new game resolution, such as sprites and portraits of the characters and even some written (the main menu is a prime example). Unlike the Phantom Brave, moreover, it lacks an adaptation to 16: 9, if not the option to stretch the image horizontally. 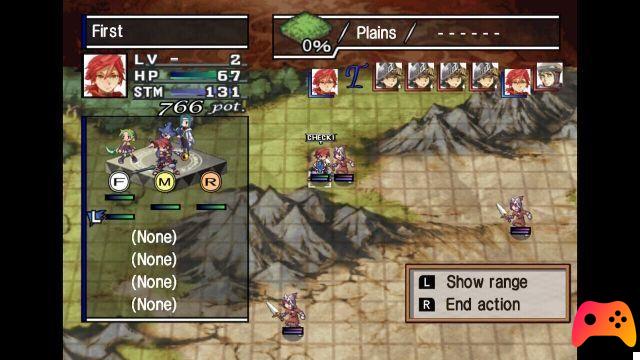 Were it not for the background work on Phantom Brave and some not-too-noticeable tweaks, Prinny Presents NIS Classics Vol. 1 could almost be classified as a porting operation. While acknowledging that the two base games don't lend themselves well to a remaster, the visual result is rather disappointing and betrays all the years on their shoulders. The value of this small collection, however, lies in the value of the game formulas of its titles: a legacy of an era in which Nippon Ichi experimented with different alternative solutions, while maintaining the cornerstones on which it has specialized over the years and for which has won over a large number of fans. Phantom Brave and Soul Nomad are solid and demanding titles that will surely delight tactical RPG lovers who want to explore something different from the usual Disgaea. Due to their peculiarity and gameplay complexity, however, they are also titles that the layman of the genre will find indigestible.