Review for Roguebook. Game for Linux, PC, Mac, PlayStation 4, Xbox One, Nintendo Switch and PlayStation 5, the video game was released on 17/06/2021

Have you ever found yourself trapped in a game loop for hours realizing that you haven't stopped yet and wondered why? This is a worthy summary of Roguebook, the roguelike deckbuilder of Richard Garfield (yes, that, the creator of Magic: The Gathering) and the developers of Faeria. 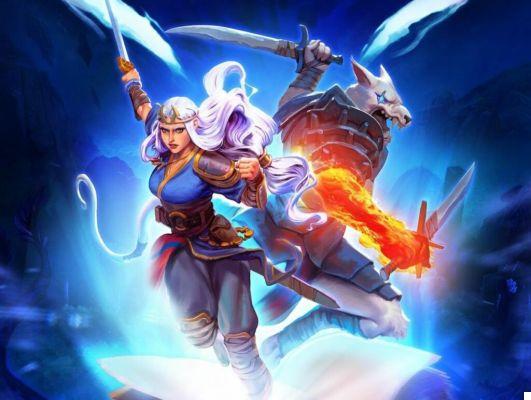 Basically, the Roguebook structure is that of a traditional deckbuilder, with the addition, however, of the roguelike elements to which many titles have recently relied: now the latter genre tends to omnipresence and, if on the one hand it is not surprising the introduction of its mechanics even in a context as stable and constant as that of a deckbuilder, on the other hand, it is truly extraordinary how the combination works so naturally.

Aesthetic style is the first thing to deserve our most sincere appreciation: it has its own clear and precise identity, certainly taken with both hands by the already existing universe of Faeria but which is still immediately memorable and able to stand "on its own feet". 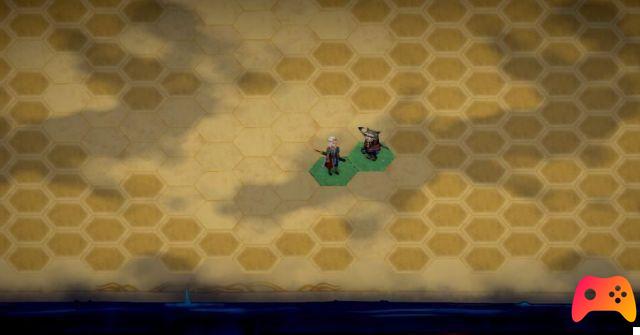 The second impact is certainly the one with the UI, very simple but which shows the side of what seems to us, at least in part, a more mobile game structure than a PC title.

Obviously, Roguebook is available practically everywhere, but we would have appreciated a UI work dedicated to the different platforms, an effort that is clearly far from small but that perhaps would have elevated it to a slightly more "premium" aesthetic sense, even if only with the addition of keyboard shortcuts, or better management of visual clutter for the cards in play.

But we come to the Roguebook core loop, the cycle of activities that characterize each game; with the exception of the first, a sort of tutorial for both the game world and the construction of the deck itself, each session begins with the choice of your hero. In total these are 4 (Sharra - Slayer of Dragons, Frog - the Unwavering, Seifer - Bloody Tyrant and Aurora - Creator of Myths), each with its own skill tree, but at the beginning only Sharra and Frog will be available, arriving, in the endgame, to a team of 2 result of any of the 6 possible combos among the 4.

Once you have chosen the hero and given us a basic deck, we start with the exploration of the Roguebook itself: this book, between the pages of which we find ourselves trapped, is aesthetically represented by a grid with hexagonal tiles that we could reveal, little by little. , using some sort of magic brush, with limited uses.

This is where the first interesting aspect of the game loop comes into play, namely the natural thrust, for the category of player known behind the scenes as "Achiever", to wanting to discover every possible tile, which is basically not feasible and which, if on the one hand appeals to the need to reveal every single unknown space, on the other, after a handful of games, it is too much the result of chance and little of a possible strategic plan, a defect which we find in part in the battles themselves.


The tiles that we will discover, in fact, will be able to conceal Hearts necessary to recharge the health of our heroes, Gold to be able to make purchases at one of the various merchants, Artifacts and new Cards with which to enhance the cards at our disposal (there are well 200) or draw new ones, but above all Battles: these are the only way to earn new ink for the magic brush, thus expanding our capacity and the perks / levels of our characters before the inevitable boss battle that awaits us on the threshold of the gateway to the next level.

After the first runs, in which you are still becoming familiar with the game mechanics, the battles are fun and very dynamic, courageous and innovative in giving importance to interesting elements such as the mutual positioning of our heroes (at the front or in the rear) and able to often offer a solution to every catch.

As we anticipated, however, this does not always work as it should: after trying different techniques and "types" of deck, even with the same enemies (taken from the 40 available in the game), we arrived at the rather anomalous conclusion that in reality the strategy to take down an enemy is one, and that much of the game and the battles consist in waiting for the right combo of cards to carry it out. It is a courageous choice and one that we respect, even though we do not fully agree with it. 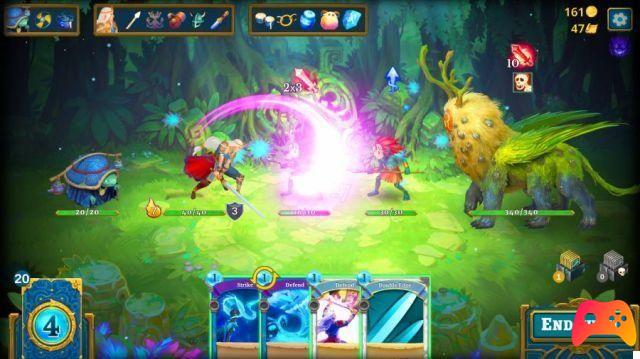 This "random X factor" is typical of roguelike, we are aware of it, but in Roguebook it is too unbalanced, so much so as to make some unfortunate runs more frustrating than even the worst game of Returnal or Enter the Gungeon have ever been able to do.

Then there is the lack of a sort of bestiary, precisely in function of the aesthetic aspect so successful also in the characterization of the enemies, and of a narrative plot a little more structured, in Roguebook pure pretext to play, just hinted at in the first phase and then relatively abandoned, also devoid of any effort of lore. 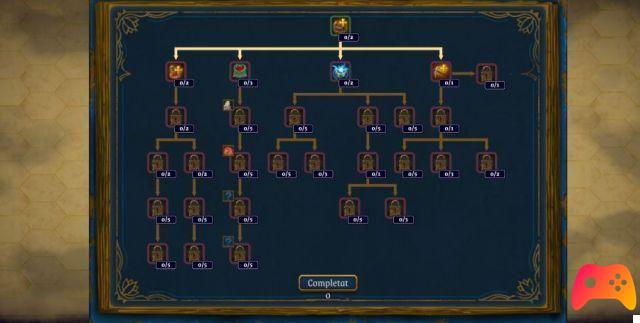 Considering the minimum 20 hours declared to be able to finish it, there is no doubt how Roguebook is able to give more than triple in terms of unlockables, powers, collectibles and much more, but there is something that made us turn up our noses and that we would like to share with you before closing the ranks of this review. During the adventure, the Pages necessary to develop the only constant upgrades run after run are random drops that can be recovered by discovering the map, however, for their effective use, we must start a new run.

With these premises, you would expect that as soon as you die in battle, the game will restart immediately with the new game, but it is not: at game over, in fact, you will be returned to the main menu. We know, it is a small thing, but at the level of user experience it makes you turn up your nose not a little, especially when the very purpose of a roguelike is to restart the player immediately after the inevitable failure.

Roguebook is a must-have, even for non-fans of the roguelike genre or deckbuilder. The aesthetic style remains imprinted right away, and it takes very little to learn what the game wants to teach us. Of course, there are choices that we don't share, such as the inability to choose at any time which cards to discard, or the use of a UI that partially detracts from the experience, but even the most lethal flaws leave room for a fun game. to play (and re-play), because basically this is one of the reasons why the video game exists, right?