Kone is its most ergonomic mouse ever.

Roccat Kone Pro already declares it on the package and on its name: PRO, a mouse intended for the most demanding, in terms of ergonomics and performance. These are the promises, but will they be kept? Let's find out together, starting from the beginning. 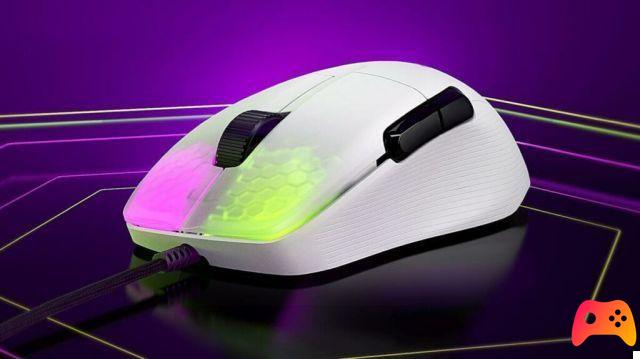 Before starting to list the qualities and defects of the Roccat Kone Pro, let's take the usual very small step back. Who is Roccat? A rhetorical question for many but not a foregone conclusion for everyone. Roccat is a company founded in 2006 in Germany, based in Hamburg, then purchased by Turtle Beach in 2019, for the modest sum of 19,2 million dollars.

Roccat produces gaming hardware, from mice, keyboards, PC accessories and perhaps its most famous line is the Vulcan, a family of keyboards that had the honor and the burden of introducing to the market, and in the "common" lexicon , the Titan Switch Optical, a new way of recording, by the "keyboard instrument", the actual pressing of the key through an optical switch that is hit by a ray of light. 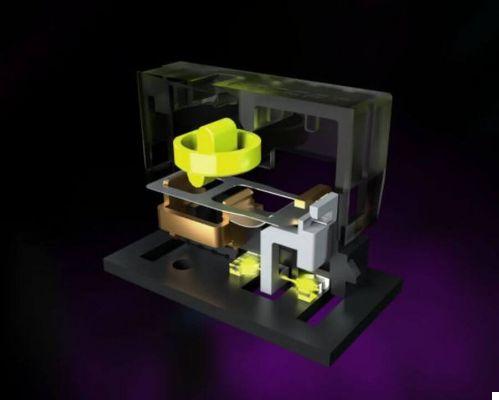 The response times, with this technology, turned out to be 40 times faster than traditional keyboards, and this inevitably led to the duration of the keyboards themselves to double (from about 50 million clicks to 100). With an average of 10-15 new products each year, Roccat seems to want to keep innovating and innovating, and the Kone Pro is just the latest blatant example.

Roccat Kone Pro arrives in an essential and rather explicit package in making people understand what to expect, even in terms of performance, from this mouse. One of the first elements of the package to notice is the Titan Switch Optical, a technology we were talking about a little above; on the sides we also refer to the other characteristics, no less important, of the Roccat Kone Pro, such as the weight (66 grams, really at the limit of the imperceptible), the RGBA lighting and the aluminum wheel. Inside the package there is the bare minimum: mouse (ours is Arctic White but also exists in Ash Black color), very short instruction booklet and set of spare feet, in PTFE (polytetrafluoroethylene, also called Teflon) like those already supplied.

Without letting go of sentimentality of any kind, the writer is keen to share first impressions also and above all at the level of unboxing and materials: apart from the lightness of the mouse, which still, with the mouse in hand and in use, we struggle to believe, it was the cable that surprised us the most, in the first few seconds. Equipped with USB-A and 180 cm long, it is the result of Phantom Flex technology, making it incredibly light and flexible, a feature that is able to give a smile even once the mouse is connected to the station. The cable, in fact, seems to disappear in the movement of the mouse, so much so that in a few seconds our brain has registered this Roccat Kone Pro as a real wireless mouse. 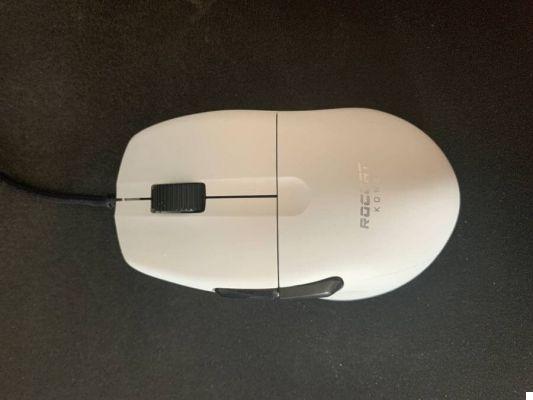 Aesthetically, the mouse seems in line with the style and aesthetics of other Roccat mice, with recognizable but not exceptionally unique shapes. Advanced ergonomics are perceived, but not at the price of unmanageable dimensions, given that we are talking about a mouse that measures 125.6mm in length, 40mm in height and 72mm in width. In terms of specifications, it does what it promises, with a 19000 DPI optical sensor and an acceleration of 50 g, but it is not these data that we want to talk to you, but the mouse experience in hand.

Light, at your fingertips

Once the mouse is connected, it is impossible not to react with another smile: in the experience of the RGB writer it has always been limited to internal components for PCs or keyboards, but to see such lighting (16.8 million colors) on a mouse it makes you turn up your nose a lot less than you might initially think. To contribute to the premium sense of the whole there is certainly the so-called Bionic Shell, an internal honeycomb structure which, according to what Roccat stated, avoids the entry of unwanted guests such as dust and dirt, while also giving a pleasant je ne sais quoi to the light show of this Kone Pro. 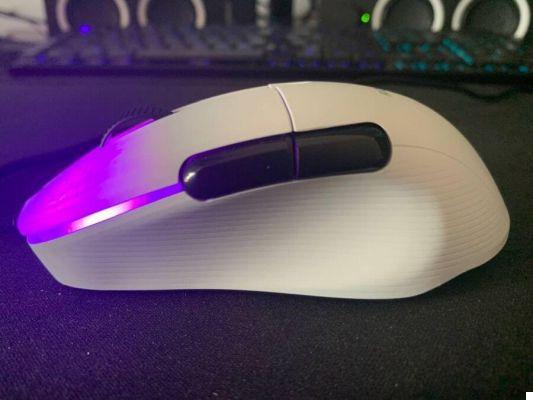 For all types of… hand

The second feature that quietly but definitely captured our attention was the ergonomics; the writer uses the PC mostly for the creation of content, including videos, with a smaller focus on gaming, and for this reason we can tell you that the change of grip is perfectly natural, even repeated several times in the same session. Well, let's not hide the fact that the Roccat Kone Pro “holds its own” with every change of hand position. Switching from the "palm" grip, with index and middle fingers resting on the upper keys of the mouse, to the "hook" one, more suited to the competitive advantage given the greater proximity between fingers and keys, is really immediate and seamless.

If we have not yet convinced you to buy, perhaps we will do it with this last detail. Perhaps the most underestimated aspect of many of the mice on the market is certainly the wheel that allows scrolling. Just to give you a reference, the writer has been using the Logitech G2 for 602 years now, which has a free-running wheel, pleasant in its silence and playfulness, but which does not give too much a feeling of rigidity and precision, with too soft shots. 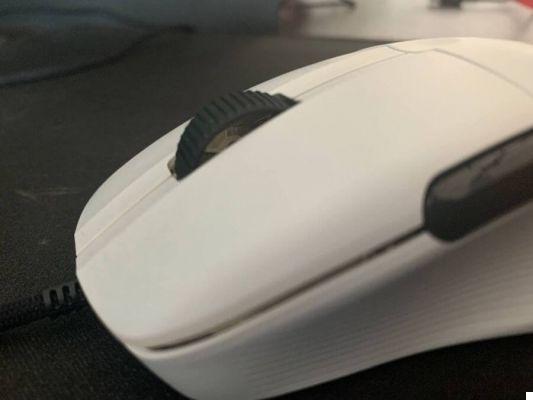 The Titan Wheel Pro of the Roccat Kone Pro, on the other hand, hollow and made of aluminum (consisting essentially only of its outer ring), offers sensibly precise and “pro” rotation steps. The feedback at the end of the rotation step is never lost, a particular certainly thick especially in non-gaming use.

Now we come to what is perhaps the only relatively disappointing aspect, the acoustic one: the click of the front mouse buttons (the two side buttons are standard in sound, size and function) is… intense. Clearly in the adrenaline rush of a competitive game this sound is buried by everything else, but in a more casual use, such as the consultation of browser pages, the elaboration of this article or the creation of a game prototype on Unity ( activity that requires continuous clicks), the clicks of this Roccat Kone Pro are a few decibels above the limit of distraction. 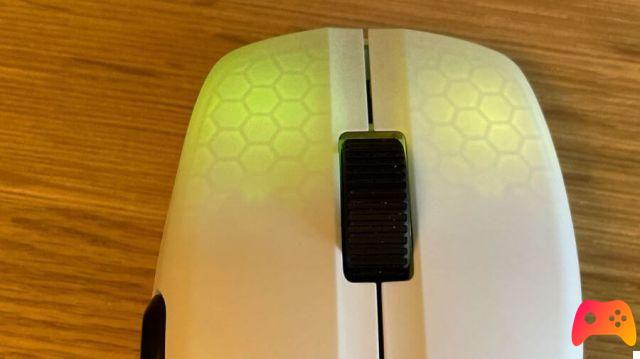 In fact, in more than a few moments, we found ourselves almost out of focus by this constant click: in a mechanical or hybrid keyboard, the click is a necessary feedback, but in a mouse that makes lightness its principle (weight of the mouse, ultra-low cable). soft, flowing), this overwhelmingly distracting sound appears heavily out of place.

Roccat Kone Pro is an exceptional mouse in many ways: it is light, it has an ultra-soft cable that you will forget about its existence after a few seconds, RGB lighting with 16.8 million colors and ergonomics suitable for any type of use. The peak of quality is certainly in the weight, of only 66 grams, and in the extreme precision and PRO-sensation of the wheel. What is out of tune in this truly exceptional package is the excessive sound of the front keys, just beyond the acceptable level, especially in a product that aims to make lightness its design method. The Roccat Kone Pro can be purchased directly from the Roccat website for € 79,99.