"Blackreff. Damn island. I don't know how he pulled me to him, much less if I will run away alive. I read somewhere that behind all this there is a hand of Arcane Lyon and Bethesda Softworks: an ever-growing partnership through which the French guys and those from Austin, Texas, were able to express their creative flair declining it in various forms. From Stealth, to Prey's sharp Survival, up to Deathloop, my loop of death ». Proudly crazy, cloaked in an intriguing retro-futuristic look, the exclusive PlayStation 5 console temporal - the version we tested but also available for PC - takes the basics of roguelite and interprets them in an original key, albeit with some simplifications and playful inaccuracies.

“And damn how deadly they can be. Who am I? Colt, you just need to know this. ' 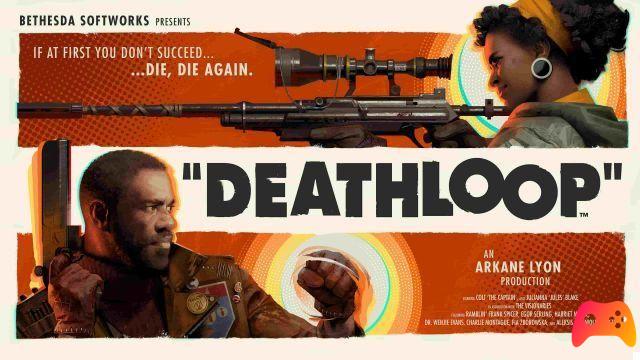 “I don't remember how it got here. Waking up on a beach littered with rubbish and a few wooden boards swollen by the water - maybe I'm a castaway? - I went into a closet a few meters from me. I then walked through a series of underground tunnels until a shrill voice nearly shattered my eardrums as I passed through the DualSense microphone. Juli… Juliette, this should be her name.

He told me phrases that seemed to make no sense at the time, something about a time loop to be protected, while I would be willing to destroy it.

His threats against me will acquire value only later, after a full-bodied preamble orchestrated to become familiar with the mechanics of this forgotten land ».

«Only later did I understand that the cycle is linked to the presence on the spot of eight people, the Blackreef Visionaries. One crazier than the other, these criminals are like an anchor that keeps him afloat but I figured out how to drag him down. It will be enough to kill them all by the end of the day, since the following morning coincides with the beginning of a new, unnerving beginning ».

If even in the preview phase the premises and the development of Deathloop seemed confused, know that trying it with your hand will clear your understandable fog.

We agree with Arkane when he calls Deathloop atypical, rather than complicated. Overwhelming yes, at least for the first few hours, since it throws at you an impressive amount of information, instructions, texts that are important especially for the Gameplay. More than in the past, the narrative context and the method of telling the latest FPS of the transalpine group could be divisive. If you give him a chance, however, you will find excellent writing of the dialogues waiting for you, of the protagonist duo - Wooo, he's talking about me - and in general a story that is gradually more and more tantalizing. 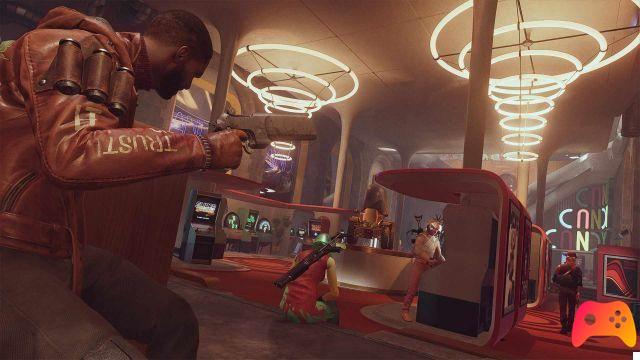 “I like to shoot. I've always liked it. I thought I was doing it to earn some Benjamin Franklin, not to survive a deadly catcher. The island offers a decent assortment of irons, including machine guns and pistols, as well as the evergreen knife, composing a solid playful first-person shooter and stealth system. Target the Eternalists, similar mannequins dedicated to raising the elbow


it's as satisfying as it is easy, since with a handful of shots they'll disappear in a cloud of smoke, leaving me ammo and more to collect. The arcade approach of gunplay is emphasized by DualSense, thanks to continuous tactile inputs accompanying each shot.

In Deathloop it rarely happens that the weapon jams, blocking one of the back keys and forcing me to unlock it. If it weren't for my gunslinging nature, the silent path would be the easy one. Getting behind enemies and stabbing them isn't complicated at all, just study their movement patterns, avoid alarming them - their window is too wide - and go straight to the target. Heck, not even the Visionaries give me satisfaction, so much so that the real challenge is to come up with a plan to annihilate them all in one day, not in the fight itself. Artificial intelligence perhaps suffers from the tendency to want to widen the meshes of the target of buyers, who see puppet opponents at our mercy ». 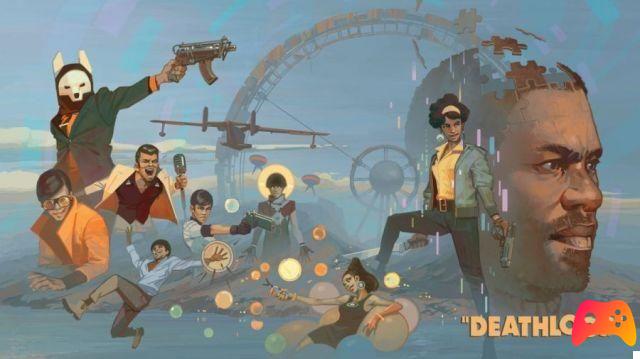 Blackreef is divided into space and time: a few maps designed by skilled architects represent our terrifying amusement park of destruction, large but also contained areas to be accessed via the main menu. An almost suffocating skein of options for setting up the arsenal, choosing the clue to follow and the time of day are the preamble to each hike. As mentioned, each corpse leaves weapons and dog tags, or discs imbued with distinct powers to be equipped in the appropriate section. Not only those dedicated to Colt, which give the double jump, greater resistance or other but also the weapons can improve with such concentrates of power. 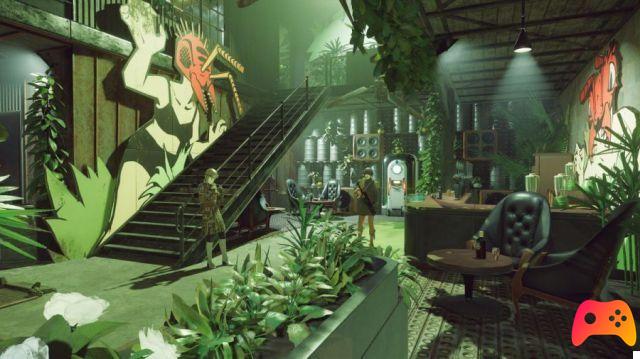 Morning, noon, afternoon and evening are the four moments to choose from: this means that for example it will be possible to visit the laboratory in the early morning to find one of the Visionaries, or speed up the hours to see him while the sun is up and enter without anyone else. wait for us. AI follows certain rhythms and it will be up to us to analyze them and use them in our favor. Unlike some purer Roguelikes, no mission is a waste: you may not silence the criminal on duty but you will certainly come across precious documents and changes for the character. The mastery borrowed from Dishonored has largely poured into Deathloop's level design, with large areas screaming freedom of approach to the player.

In fact, he will be able to pass along a path hidden by high rocks to escape the Eternalists, or pass through the roofs of the center and enter through a casually open window. All in favor of a significant range of possible solutions, although, to be honest, after a tiring up and down it all ends in a stab in the chest of the wanted man. 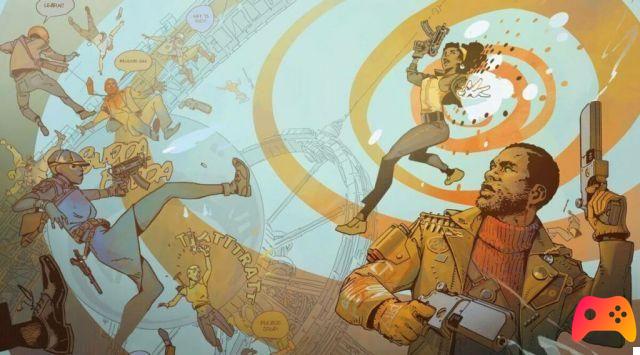 “Talos I is light years away from Blackreef. The geography and climate of this cursed atoll could bring it closer to the southern hemisphere, near Australia, where the dry heat meets and collides with the freezing cold of Antarctica. A beach of fine sand hits impetuous rocks ready to rise as far as the eye can see. Yet, enclosed in the mountains, urban areas and military and scientific bases forcefully take the place of nature. The scenario is realistic and surreal at the right point, accurate in the 60's USA setting and at the same time softened by a psychedelic aesthetic close to an animated product. 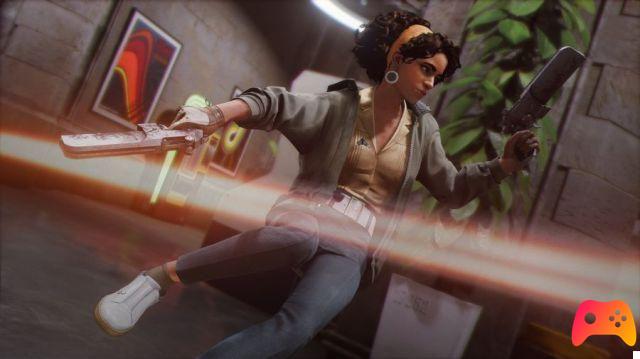 Deathloop offers a good synergy between game design and art direction has conceived a conjunction between A Clockwork Orange and the early 007, to want to look for familiar examples. All for a visually good game, with finished textures alternating with some secondary smudges, capable of withstanding 60 fps. To report some blockages of the screen lasting about ten seconds, still to be solved despite an update prior to launch.

While the music of In Deathloop does not scream a miracle, let's spend one last comment in favor of the Spanish dubbing. To lend my voice to the people of the boot is an excellent Francesco Rizzi - you will remember him as Deacon in Days Gone - but, if I have to, an applause also goes to the performance of Julia, Julianne, that one - I swear you will pay me at the next invasion - A work made of synergies between the nemesis couple of acquaintances that encourages identification.

With Deathloop Arkane Lyon offered us a one-way ticket to Blackreef, impossible to refuse. If the reiterative basis is typical of roguelikes, the gameplay, the story and the soul of the game are all the result of the transalpine developers. A hybrid game system between first-person shooter and stealth is applied to an engaging storyline and world building. While the one is satisfying, however, the second does not fully satisfy the premises, making use of mechanics so well known yet elementary. The AI ​​of the enemies makes every mission an almost simple victory. In Deathloop the freedom of approach promoted by the development team is well studied and convincing, even if it risks being reduced to a simple walk ending in a silent kill, being careful not to wake our nemesis.