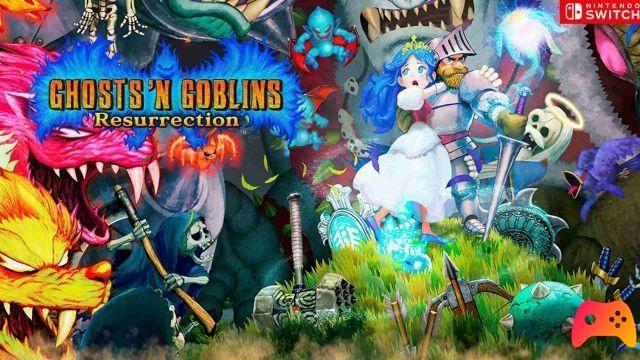 Review for Ghost 'n Goblins Resurrection. Game for Nintendo Switch, the video game was released on 25/02/2021

The decade that starts around the 80s was the golden age of cabinets: at that time video games were mostly relegated to limited environments where you went with friends and an impressive load of tokens or coins. Insert coin and away with the game, almost always adorned with screaming friends cheering you on. In this era, memorable pearls were born that are now embedded in our hearts, such as Ghosts' n Goblins, which saw a talented knight face hordes of monsters to save his beloved.

Thanks to Capcom, nostalgics will cry tears of joy in being able to help Sir Arthur re-embrace his beloved in Ghosts' n Goblins Resurrection, a total remaster of the original title that lands on Nintendo Switch. 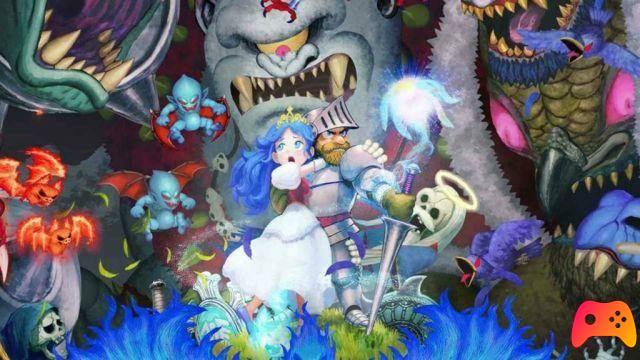 First of all it should be explained that labeling Ghosts' n Goblins Resurrection as a “remaster” is at least an understatement. Taking the original title as a basis, in fact, Capcom has completely rewritten and redesigned everything from scratch. However, the basics remain that strongly recall the original GNG with a series of references that evoke as many emotions: we will find the plot intact which, although it may appear only sketchy to the newcomers to the title, will still be able to enchant gamers who lived the initial era. of the video game, like the writer of this piece.

For the rest almost everything has changed: graphics, sound, gameplay; even the armaments have been rewritten from scratch, with implementations that manage to marry the essence of GNG in a truly excellent way. 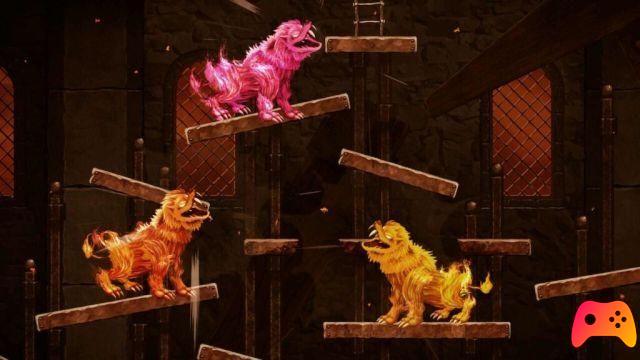 The graphics of Ghosts' n Goblins Resurrection are not in pixel art style: for this title Capcom has decided to switch to a "puppet" style entirely drawn by hand and with brushstrokes reminiscent of a painting.

The movements of the characters are all linked to the joints of these imaginary puppets and create a dance with a multi-layered backdrop that gives a sense of depth. The colors and above all the music go well with the dark setting, giving uniformity to everything in a truly exemplary way and also bringing out the light side of Ghosts' n Goblins Resurrection, as when the protagonist loses his armor and fights in his long johns. polka dot or is turned into a toad and must try not to get killed. To mix everything well we find a stable 60 FPS graphics and excellent command responsiveness, both the result of the excellent work of the development team. 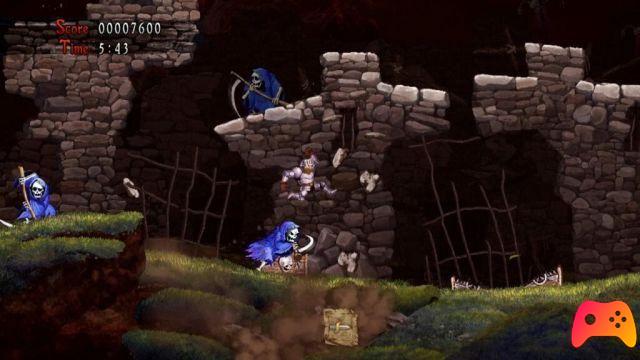 The gameplay, branded by many as frustrating or prohibitive, is really very similar to the original title and those who have already had the opportunity to face Ghosts' n Goblins will immediately find themselves invaded by an already known feeling. Jumps and attacks are managed in a manner related to the pressure of the keys and it is immediately necessary to understand that shooting wildly while jumping here and there is something to be avoided.

Enemies randomly pop up from each side of the screen, and hoping to stop in one spot to take them all out is something to avoid if you don't want to die prematurely. It is advisable to continue with a slow and rhythmic trend and with total attention to what happens on the screen, trying to calibrate everything well and to make the right reliance on the weapons at your disposal. 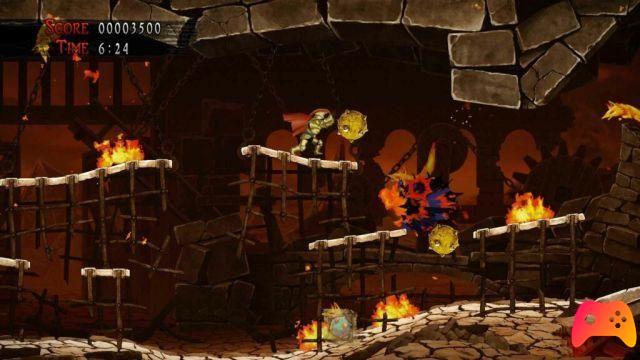 The weapons compartment has in fact increased and in addition to rotating shields, spears, axes, daggers and torches we will also find other weapons such as boulders and hammers. In addition, Capcom has also implemented, thanks to a tree of magical fireflies to repopulate, permanent power ups such as the ability to manage and exchange different weapons in real time and the ability to summon timed spells.


The cheap and macabre humor - and at the same time very funny - lives again in these too spells, which for example give us the ability to transform all enemies on the screen into toads with limited movements (but no less lethal for this). 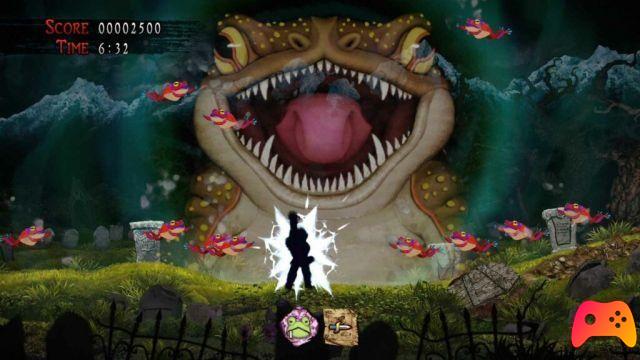 The level of difficulty that scares many is really well calibrated even if high: first of all we will be able to choose between four different levels that will see us start over from the point of death (and not from the banner of rebirth) at each departure in the simplest level to bring us to permadeath in the most difficult. Furthermore, in the settings there is the magic metronome that allows us to slow down the actions of the enemies on the screen, giving us the possibility to manage attacks more calmly and effectively. The offer is completed by the skills unlocked with fireflies, the golden armor (eye because there is also a negative counterpart which we will not talk about so as not to spoil the surprise - Ed) and the possibility of managing multiple weapons simultaneously by adapting them to the context of the scheme : all features that allow the player who faces Ghosts' n Goblins Resurrection to learn little by little until they master the title like a real pro.

Capcom seems to push in this direction, allowing the player to select the stage to face, repeat it, go back, and access the skill tree from the map, as if it were encouraging us to do better and better in living the experience offered by Ghosts' n Goblins Resurrection: after all - even if we are sure that the kidnapped princess would have to complain - it is not as important to get to the bottom as to enjoy the journey. Furthermore, each level is full of secrets to discover, fireflies to recover and chests to appear. 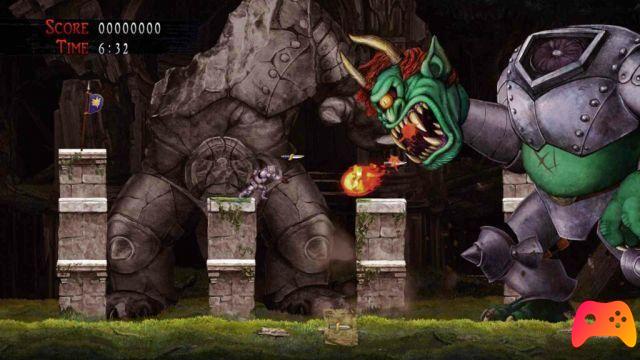 A nice cooperative mode also makes its debut in Ghosts' n Goblins Resurrection for Nintendo Switch: the second player will take on the role of a ghost and will have the task of protecting the protagonist with barriers and spells in order to facilitate his action. Nice addition that would have also embellished the original title and that also goes to dampen the level of difficulty that worries many.

Ghosts' n Goblins Resurrection is a rare gem that must be recovered at any cost. Despite the level of difficulty calibrated upwards, we recommend not to miss the opportunity to taste - or relive for those who are more advanced in years - a videogame jewel that still today gives great moments of fun. The excellent restoration by Capcom and the numerous additions added embellish Ghosts' n Goblins Resurrection without distorting it, elevating the gaming experience from a retro cult to a must have.

► Ghost 'n Goblins Resurrection is a Platform-Adventure game developed and published by Capcom for the Nintendo Switch, the video game was released on 25/02/2021

Do you want to be an expert and know all the tricks, guides and secrets for your video games? Epictrick.com is a group of video game enthusiasts that want to share the best tricks, secrets, guides and tips. We offer the best content to be a source of useful information, so here you can find guides, tricks, secrets and tips so you can enjoy your games to the fullest. Are you ready to get all the achievements of that game that you resist so much? Enter and enjoy your favorite video game to the fullest!
Ghosts' n Goblins Resurrection - PS4 Review ❯

The Witch and the Hundred Knight 2 - Review