Review for King's Bounty II. Game for PC, PlayStation 4, Xbox One and Nintendo Switch, the video game was released on 24/08/2021 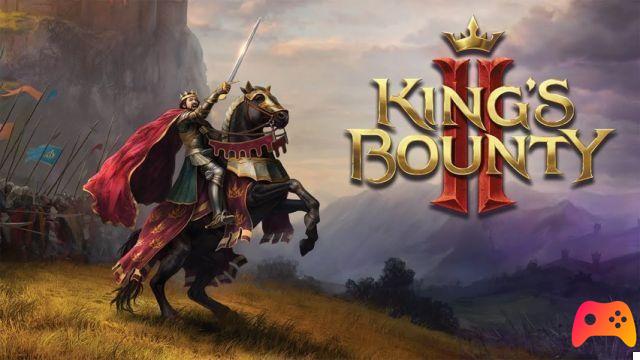 In an effort to mix different genres such as RPG, Open World, Turn-Based Strategy and Adventure, many have tried their hand at over the years. In fact, ideally this is a cocktail that works: the depth of RPG mixed with strategy and combined with a vast world to explore is tempting and mouth-watering for many. So 1C Publishing EU tries to churn out a fresh product, which traces and improves the past and serves a fresh King's Bounty II directly on Xbox One, PlayStation 5, PC and the inevitable Nintendo Switch. Will the development team be able to churn out something tasty and palatable? Let's find out together.

Let's start with a banal texture, just hinted at but which leaves a good taste on the palate. In the kingdom of Nostria an ancient prophecy sees us in the role of the savior of the world from the darkness that is about to fall upon humanity. The first choice proposed is to decide who to impersonate between a contemptuous warrior, a powerful sorceress and a champion of the people. Be careful because choosing the character is not just a matter of personal taste, but it implies deciding an ideal to be pursued for the rest of the adventure, which heavily affects the choices and the fights.

Whatever the virtual alter ego chosen, at the beginning of the game we will find ourselves imprisoned for a "misunderstanding" based on brawl and poison. The prince himself orders our release and, from here, the adventure begins to unfold. Our jailers are bewildered: no one had ever come out of prison on their own legs, and above all no one had been provided with food, weapons, horses and escort troops to go to a rendezvous in view of the birth of a company.

Although there is nothing particularly original, the plot works, thanks also to a good English dubbing, a good Spanish translation and a series of dialogues that, for once, do not make the story seem too surreal: the jokes are credible. , and suitable for the context, and in this case they make a difference.

The player will have some freedom of movement a la The Witcher 3, just to give you an idea. Unfortunately, to make the plot hold up and not weigh down the title, we tell you that the open world genre used at the beginning of this text is just a red herring. The way forward is predetermined and the deviation possibilities are open only according to the side or to lead the player to the discovery of some hidden treasures. In short, in King's Bounty 2 what appears to be an excellent landscape in which to wander freely turns out to be a path to follow for the unfolding of the adventure: nothing too disturbing, but the premise deceives and makes you turn your nose up at reality.

Our player cannot jump, climb over but neither run nor dodge or attack, whether on foot or on horseback. You will travel with a weapon on your shoulder that will never be used, you will be able to cast spells but you will never see the waving of a wand, and this annoys. In King's Bounty II the open world movement is the graphic display of a series of commands such as: go forward, turn right, go back. Moreover, before we talked about ideals that characterize the characters and, for example, if you impersonate a warrior, you will not be able to circumvent a group of enemies, while using the sorceress you will not have the possibility to engage in a battle if there is a way to avoid it with cunning. So the frustration increases and exploration doesn't ease the pain, with the few childishly simple environmental puzzles more devoted to spending time than anything else, waiting for the next battle. Here, there you have fun.

King's Bounty II is a turn-based strategy game with an isometric view on a hexagonal board fixed to varying terrains. Once you have entered the battle, you are on the game map on which to deploy the troops. A little parenthesis should be spent on the fact that in a credible and well-constructed context on the plot side we find a character who explores alone and who, in the moment of the clash, pulls out dozens of different troops from his pocket to deploy them in battle. At this point, perhaps it would have been better to implement a sort of spell in the plot to justify this feature that makes this passage forced and surreal.

Deploy the troops according to your tastes, the battle begins: both the units and their use are well structured, with strengths to discover and characteristics that are effective or not depending on how you use them. Archers get along better from above, while against large troops it is better to use dogs as a forerunner, just to give an example. Moreover, King's Bounty II provides that as the protagonist and units level up, the attributes and capabilities of the latter also change, opening up possibilities for new strategies and new combat assets.

The main player's prerogative is that of casting spells or using skills, both passive and active, both disposable (thanks to artifacts) and stable (thanks to learned skills). Use carefully these abilities allow you to make a difference, but in King's Bounty II there is another thing you need to pay attention to: your army cannot be deployed in battle randomly or by judging only its strength.


King's Bounty 2's ideal system predicts that units with different ideals don't get along with notable repercussions. If the commander and the troops pursue two or three different ideals, not only is the damage reduced but we could even find ourselves in a position where our soldiers do not follow our orders or even take sides against us. If, on the other hand, we do things right by uniting everyone under the same ideal, even the weakest soldier can actually make a difference.

Moreover, to emphasize this concept King's Bounty II offers pre-compiled maps with seemingly impossible challenges but which, thanks to the tree of skills and ideals, demonstrate how the right strategic choices can make a difference. If (like us) you do not particularly love this direction taken by the King's Bounty II development team, you cannot fail to appreciate its originality and effectiveness.

The version we tested, the one for Nintendo Switch, turns out to be optimally optimized, with reduced loading times and without particular graphic compromises.

King's Bounty II developed by 1C Publishing EU and produced by Deep Silver E Cock Media for Xbox One, PlayStation 5, PC and Nintendo Switch attempts the combination of RPG, Open World, Turn Based Strategy and adventure, only partially hitting the goal. The attempt to assimilate the open world fails while the strategic part innovates and strikes, whether you like it or not, partially remedying the gaps present. A good plot and good dialogues support the adventurous part of the title, which on balance is saved and also allows a good replay factor.

► King's Bounty II is a turn-based RPG-Strategy-Game developed by 1C Publishing EU and published by Deep Silver Koch Media for PC, PlayStation 4, Xbox One and Nintendo Switch, the game was released on 24/08/2021

Do you want to be an expert and know all the tricks, guides and secrets for your video games? Epictrick.com is a group of video game enthusiasts that want to share the best tricks, secrets, guides and tips. We offer the best content to be a source of useful information, so here you can find guides, tricks, secrets and tips so you can enjoy your games to the fullest. Are you ready to get all the achievements of that game that you resist so much? Enter and enjoy your favorite video game to the fullest!
Farming Simulator 22: Collector's Edition presented ❯

Batman: The Enemy Within - Episode 1: The Enigma - Review