Okinawa Rush arrives on Nintendo Switch after being released on PC via Steam, on PlayStation and Xbox thanks to a crowdfunding commitment fully funded in a very short time on Kickstarter. The development team made up of the joining forces of Storybird Games e Sokaikan Limited, focuses on creating a 2D Platformer and Side Scrolling Beat 'em Up title. Both genres were very popular in the 90s but are capable of arousing the hearts of nostalgics even today: from the support of publishers No Gravity Games e Just For Games therefore a complex, multifaceted and fun title comes to life in full pixel art.

So let's go together to discover Okinawa Rush. 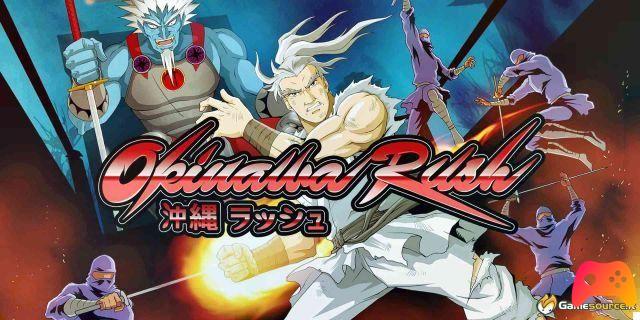 A dark army of ninjas by the name of Black Mantis targets the territory of Okinawa, an island in Japan where karate is believed to have been born. The pure heart of martial arts is therefore in danger and the task of protecting the honor of the sacred martial art belongs to Hiro, Meilin and Shin, three masters in different disciplines and with different fighting styles but united by the only goal of defeating the clan. enemy.

The three heroes will have to protect the legendary scroll of Hiro Yashima, capable of giving supernatural martial skills, summoning flames and sounds in order to defeat anyone.

The plot of Okinawa Rush is also very evocative of the martial arts vision typical of the 90s; with the myth of Karate Kid and with the profound spirituality infused in the television dojos, generations of players and dreamers have grown up, who still remain so today thanks to the ability to reproduce typical of today's media.

From the point of view of the gameplay, Okinawa Rush looks very good also strongly underlining a graphics in pixel art. The movements of the characters are really very precise and fluid and the typical feeling of woodiness that this genre instilled is to be forgotten. The park moves, then, is something spectacular: each of the three characters is not limited to simply using punches and kicks; in full Street Fighter style it is possible to use complex techniques such as hadoken and much more. 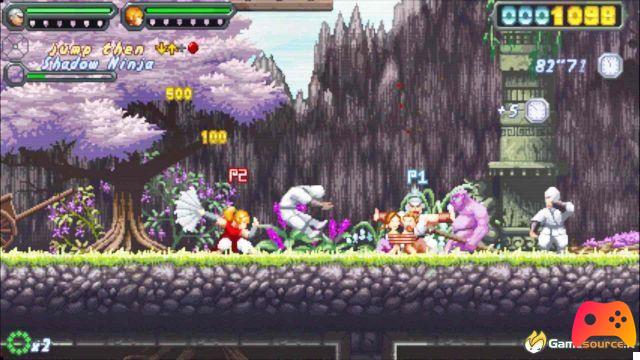 This adds incredible depth to Okinawa Rush which, combined with the ability to parry any object with a blow, gives the title the thickness of the beat 'em upor. The move set shown here is just an example: 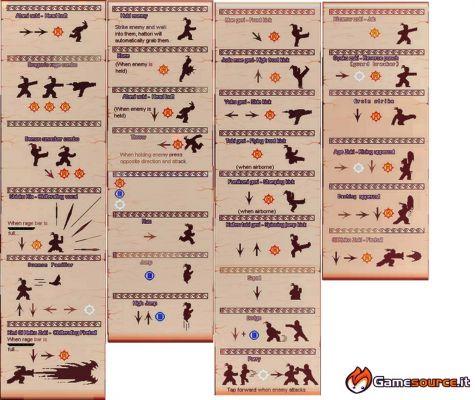 Even the opponents have typical moves and variegated and recognizable attack patterns, which give the title a complexity that forces the player to evaluate how to deal with enemies without throwing himself headlong into the fray. The bosses then are all well characterized and complex, and will force the player to several attempts before being able to defeat them but watch out ... the credits for the continue are not infinite.

As for the Okinawa Rush graphics, we can say that the deliberately poor style in pixel art does not undermine the construction of pleasant animations and complex backdrops. among other things also equipped with several secrets to discover. Each character is then constructed in an articulated way thus giving uniqueness and fluidity to the movements and attack patterns.

The countless cinematic cutscenes illustrated by hand in retro style finally give complexity to the story which, without the risk of spoilers, gives different endings depending on the character with which you will face the main plot. There is also a videogame mode, aimed at the mere "lead the hands" which provides a high replayability to the title.

Replayability also supported by cooperative multiplayer that allows you to face Okinawa Rush in two, which is not only appreciated but recommended to everyone especially given the possibility of making combos in pairs that are really beautiful to look at and devastating in practice. 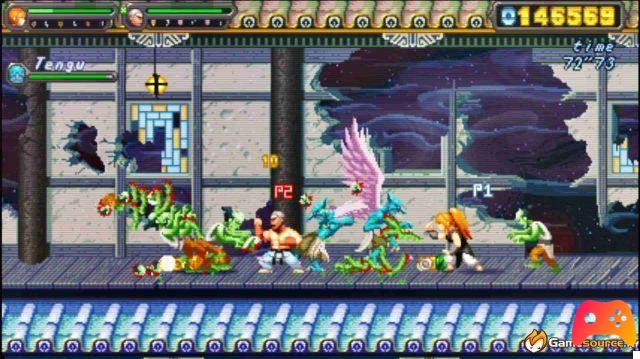 Finally, to complete the package offered by Okinawa Rush we find a shop where you can buy items to customize your dojo through a merchant who is located in three different game areas where you can spend the money accumulated by mowing down enemies and discovering secrets.

If inside the gym you use particular objects in particular combinations called "Bonus Feng Shui”, You will also get a power up of your character's stats or the unlocking of secret abilities.

A title is hardly free from defects but, considered in the context of “homage to the 90s”, with all the pros and cons that this entails, it can be said that Okinawa Rush's programming work is perfect.

Okinawa Rush is a very special title. Built on the combination of simplicity and depth, it is incredibly layered and deep in both gameplay and story. The move park of the selectable characters manages to amaze for its complexity and depth, and the longevity, combined with the arcade mode, offers a number of hours of fun worthy of note. The only flaw, if it can be defined as such, is that, if you do not like the proposed genre, this title will not make you change your mind as it is an incarnation, however more complex and articulated, of the nineties sliding platform / fighting game.

► Okinawa Rush is a Beat 'em up-Platform-RPG-Adventure-indie game developed by Sokaikan Limited Storybird Games and published by Just For Games No Gravity Games for PC, PlayStation 4, Xbox One, Nintendo Switch and Steam, the video game is out the 26/03/2021 The version for Nintendo Switch came out on 28/10/2021

Is It Wrong to Try to Pick Up Girls in a Dungeon? Infinite Combate - Review