Review for humankind. Game for Steam, PC and Google Stadia, the video game was released on 17/08/2021

humankind it tells important issues, such as history, multiculturalism and social stratification and we are proud of what we have achieved. We created a historically credible title and sandbox to give gamers the creativity to make their own historical narrative. These are some of the features that Amplitude Studios he wanted to emphasize by sending us the code to write the review humankind. 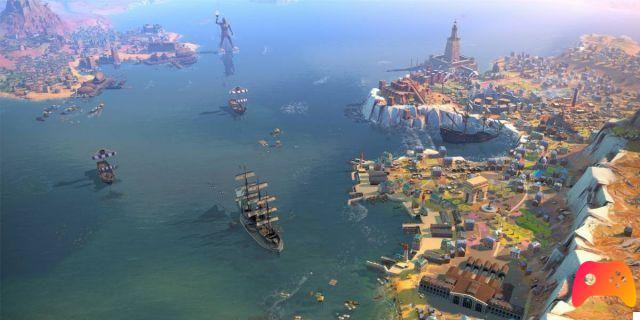 Humankind Review - a screenshot of the video game

The title aims to represent a combination of different cultures in different historical eras and to do so it relies on the innovative system of fame: whatever action you carry out within the game, whether it is to have hegemony on the continent, or the army larger, a technologically advanced company, or whatever gameplay choice you decide you want to follow, the goal is to establish itself as the most famous civilization in the entire game world. It is not enough, in Humankind, to aim the gameplay towards one of the cornerstones of scientific and cultural progress. We need a union between them. Having launched a satellite into orbit before rivals does not necessarily mean having reached new technological heights. Backward industrialization does not necessarily equate to the backwardness of your nation. What matters is the fame that you have built up during the evolution of geological eras: Humankind tends to this.

The key features of the title, as Amplitude Studios wanted to underline, are depicted in a new construction of the city, ideology, cult, sociological alignment and wars. Humankind is a union of all these things and we are going to describe them in this review. 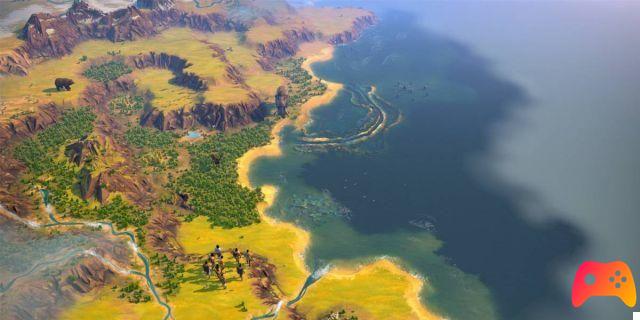 A group of hunter-gatherers are exploring in search of berries or easy-to-catch prey, some animals are wandering in the prehistoric and wild lands, while a rival tribe has already decided to settle on the river's edge. The Neolithic marks the beginning of your adventure along the geological eras of the Earth and from here begins the historical evolution. The first few turns of the game are for your hunter-gatherer tribe to explore the wastelands in search of ruins or food to collect. The gameplay is decidedly limited in the first rounds of the game and it is precisely this limitation that makes us choose the Neolithic as the most successful geological era of the entire adventure.

While exploring, you have different options for reaching the Ancient Era and unlocking the first society: find ruins, find enough food to convince other hunter-gatherers to join your tribe, or take down wildlife. Amplitude doesn't limit gameplay and it does not oblige the player to evolve in a structured society to obtain the first star, indeed, if you want you have the freedom to remain a tribe of hunter-gatherers until all the aforementioned choices are unlocked. During the Neolithic era you have another goal, perhaps the main one considering that you have to slowly evolve into an empire: to found your own settlement. Once you have decided to settle your tribe and have obtained the first star, it is up to the choice of culture. 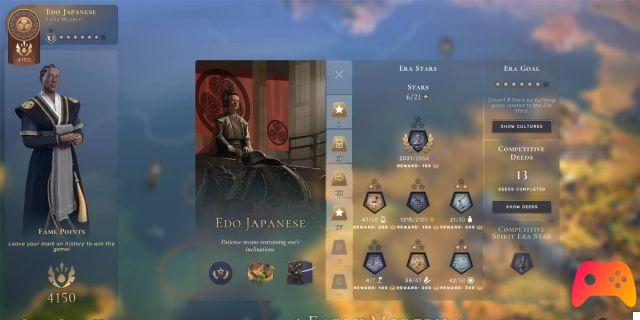 Since we have already touched on the stars and settlements, let's go into detail on how to grow the tribe to become a great empire. Humankind divides the progression of civilization into different sectors: militaristic, scientific, agricultural, etc. Each sector in turn has different objectives, upon reaching which you unlock a star. Once you have reached the required number of stars, you have the chance to reach the next era and unlock a new culture. Humankind's geological eras make you choose from ten different cultures. The game also gives you free choice in this: you don't necessarily have to choose a new culture at each evolution, if you want to use the same society from the Ancient Era for all subsequent eras of the title, Humankind grants it to you. When discussing the empire, one must distinguish between cities and settlements themselves. Cities are advanced settlements to which simple settlements are linked and you have no limit on the number of simple settlements to build, you have a limit on the number of cities to govern, dictated by the technology tree and the sociological alignment of your empire .

We still have to discuss the growth of the city, ideologies and how these are portrayed in sociological alignment, worship and wars. 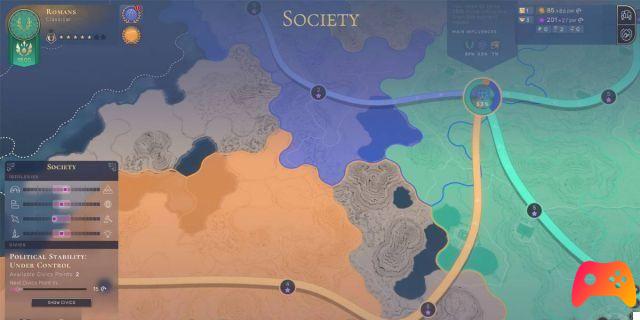 Let's start with the city and the settlements. Humankind gives you free choice on how to grow your cities, whether to make them an agricultural, militaristic, industrial, economic or scientific center. The choice of culture should follow your style of play: a scientific one should focus on technologies; an industrial one, on the growth of industrialization. Building the stronghold requires strategy: as the districts increase, discontent increases, which in the long run leads to riots. We need to balance the growth of the city using reasoning and it is not enough to expand the borders, we need to give balance to the empire, and here ideologies and worship enter the gameplay.

As the ruler of the empire, it is up to you to outline the ideology of your culture, which represents the founding values ​​of your society within the game.. From a dictatorial and slave culture to a free empire, decisions affect your settlements and rivals: if you want to build lasting alliances, you need to have as many points in common as to manage friendship with other governors, or prepare the army to colonial wars. As we said about the cult, this feature also serves to outline your style of play. By growing followers both within your empire and in rival ones, you unlock the tenets, or the founding dogmas, which give you boost in one of the focal areas: militaristic, scientific, agricultural, etc. Having similar ideology and cult provides a boost in settlement management and lessens riots. 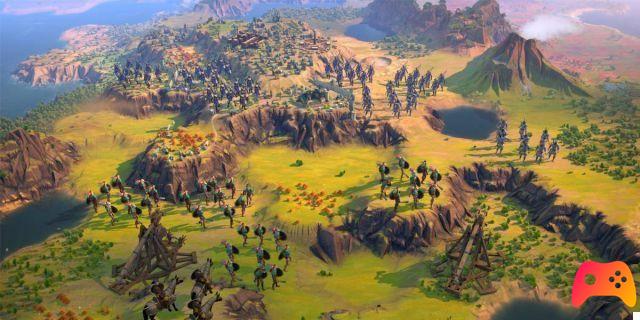 Interactions with rival companies generate friendship or discontent, this once a certain threshold is reached, resulting in a war. The more your cities feel they have been wronged by other cultures, for example the refusal of a treaty to guarantee free trade, the more the will to war grows.. The phases of the conflict are divided between deployment and skirmish. During the deployment phase we must deploy the troops in the area, considering the strengths and weaknesses that each regiment of our army has, for example the archers should not be deployed in the front line, but in rear areas considering the high radius of the their attack, unlike the lancers. The goal is to capture the enemy flag or, alternatively, force the enemy to retreat.

We have outlined what we believe to be the fundamental characteristics of the Amplitude iteration, without delving into the secondary features of Humankind such as the management of luxury resources and the construction of cultural wonders, as in the game you have a tutorial section that has many explanatory videos on the functions of the title. . 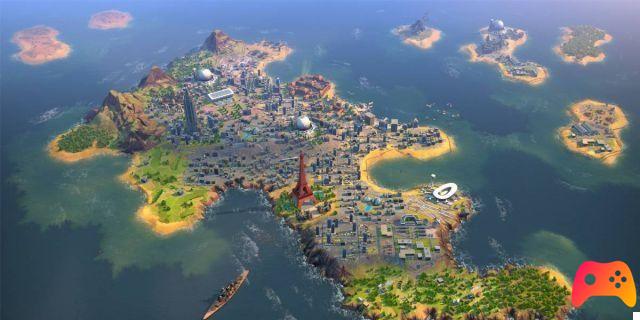 Humankind is an innovative title that still has some gaps. We found several features of the game that we think should be fixed, including the difficulty level, the handling of treaties, and the absence of a location. These elements do not affect the playability of the title, however in the evaluation phase we must take them into account. Humankind is a difficult video game, which needs hours and hours of play to be able to learn its secrets. It is not a video game suitable for casual gamers, instead it winks at the assiduous players of the strategists. The exchange agreements between the different cultures are decidedly limiting, the sale of a particular luxury resource cannot be refused, if not completely blocking the exchanges. Furthermore, such an ambitious title should not have excluded those gamers not accustomed to the English language from being usable.

We have written a lot and we close Humankind's review by outlining the elements of graphics and sound. The cartoonish style, combined with an intriguing soundtrack, mix in a refined artistic game that make the Amplitude title an absolutely successful video game.

In this Humankind review we told you about how much the studio wanted to renew strategic video games that refer to 4X and for various innovative mechanics achieves this goal. The artistic, graphic and sound style certainly give a boost to the entire title that becomes one of the best strategy video games. Amplitude Studios has worked on this iteration with detail and this is noticeable, however some gaps should be fixed, to be able to achieve the perfection that the studio aims for. A video game definitely recommended for regular users of strategic video games.

► Humankind is a Strategy-Tactical game developed by Amplitude Studios and published by Sega for Steam, PC and Google Stadia, the video game was released on 17/08/2021