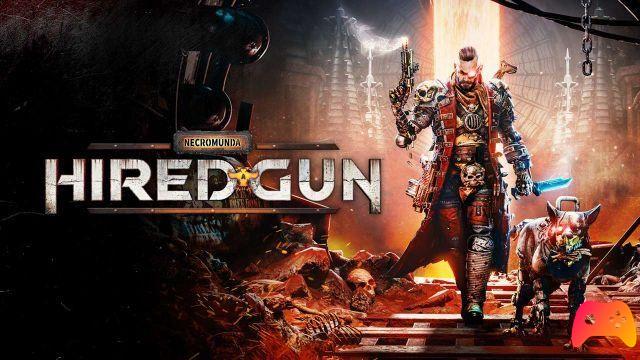 Review for Necromunda: Hired Gun. Game for PC, PlayStation 4, Xbox One, PlayStation 5 and Xbox Series X, the video game was released on 01/06/2021

The universe of Warhammer 40,000, Games Workshop's famous futuristic franchise, has generated a whole series of excursus in the videogame world and the latest example in this sense is the indie Necromunda Hired Gun, first person shooter developed by French Streum On Studio, now veterans of boardgame and wargame-inspired titles, and distributed by Focus Home Interactive on PC and console. In an era characterized by shooters based on battle royale and, in general, multiplayer, with Necromunda Hired Gun we will find ourselves facing, in contrast with the latest productions, a single player title consisting of a main campaign and a whole series of secondary missions able to increase its longevity. 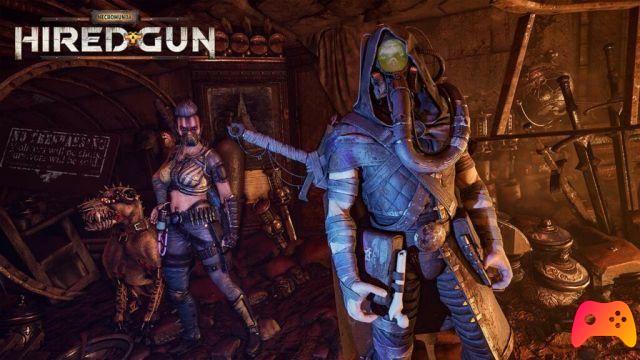 Necromunda Hired Gun follows the adventures of a bounty hunter (mercenary or hired assassin, if you prefer), his faithful hound and a whole series of supporting characters who move their steps in the anthill planet Necromunda: a decidedly unsafe and hospitable place but which sees a flourishing movement of goods and people. Although a title based on the single player can be expected a plot complexity built in an intriguing and immersive way, in Hired Gun the aspect on which Streum On Studio has focused the most is undoubtedly that of a frantic and splatter gunplay. However, we are faced with an attempt to build a complex narrative arc with the protagonist - decidedly anonymous and interchangeable at the beginning of the game by choosing between various models - who finds himself in spite of himself in clashes between rival clans and tight manhunts. 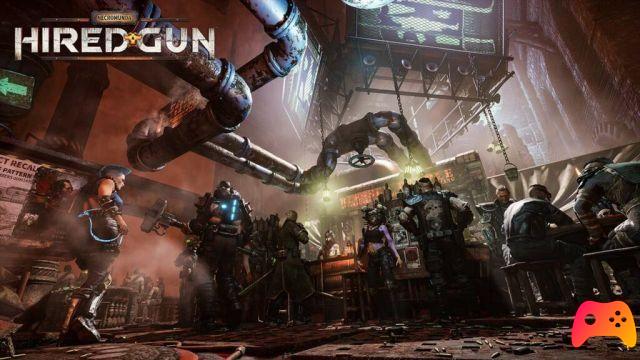 All this will happen after a first introductory mission in the company of other bounty hunters and which will end with an ambush that will see our people get the worst. Fortunately, an old acquaintance from a hazy past will come to our rescue: the mysterious Kal Jerico will save us by making us implant cybernetic parts and leading us to the safe haven Martyr's End. This place will in fact be our base, from which we will move forward in our history, mostly losing interest in a story that can never fully convince and that will see us ignoring the various dialogues most of the time to move on to the next. mission, much more intriguing. 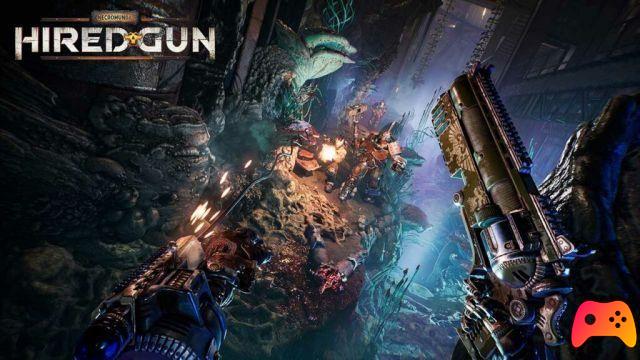 We must not be fooled by the traditional FPS patina, Necromunda Hired Gun owes a lot to titles such as Diablo and Torchlight with a setting reminiscent of more traditional hack and slash: a base camp, various merchants and missions able to give us money and treasures recoverable from defeated enemies and hidden chests. From the fantasy and medieval atmospheres of Blizzard masterpieces, however, we will interact with a sci-fi, cyberpunk and decidedly dark and threatening environment.


The gameplay, or perhaps it would be better to say the gunplay, is rather linear with the possibility of using short, medium or long range weapons by integrating some peculiar skills of our character such as double jump, running on the walls and the useful grappling hook, more a whole range of skills such as aim assist, shock waves and so on. It will therefore be possible to strengthen our alter ego by purchasing bionic upgrades for oneself or for the faithful canine ally: an additional weapon capable of being useful for ambushes and in the phases in which we will be numerically inferior. As in the most classic of hack and slash, in addition to recovering objects on the battlefield, it will be possible to buy weapons, armor and accessories from the merchant on duty to better enhance our arsenal. 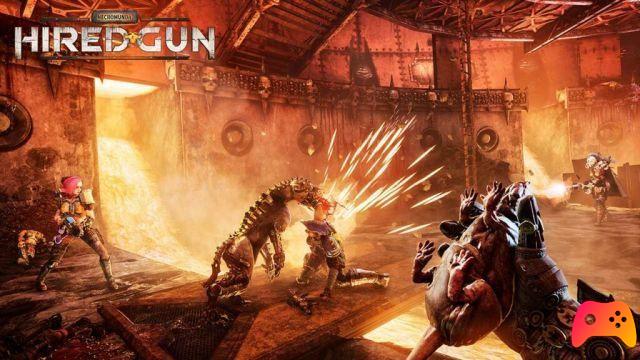 Necromunda Hired Gun gives its best in the combat phases in which, thanks to the frenzy and the copious number of enemies, we will taste the funniest and most satisfying moments of this videogame product. But be careful not to confuse fun with complexity and excellence: the fire fights, alternating with phases of exploration, in the long run will be repetitive and not very varied mainly due to a not excellent artificial intelligence and to a variety of environments and enemies that are far too small. Despite this, this is precisely the most appreciable component of the production, given the lack of incisiveness of both the narration and the characters we will meet during the campaign. 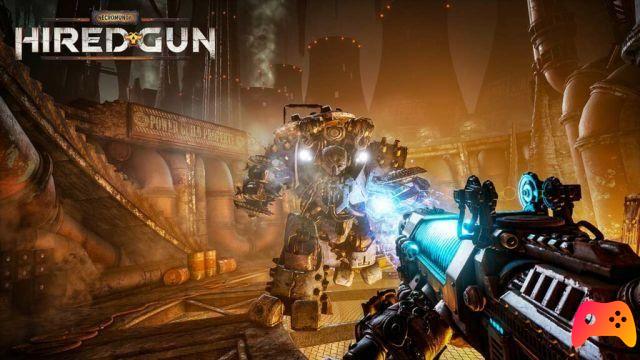 As this is a single player experience, longevity is an important factor as well although the main campaign is not very long, the various side missions - useful to maximize our character and his arsenal - will guarantee between 10 and 15 hours of play, a timing perhaps too small but in line with most single player FPS experiences.

On a technical level, the title Streum On Studio is pleasant with the revived Unreal Engine 4 which guarantees fluidity even on not too recent machines. However, do not expect graphic miracles but, being an indie title, the attention to detail and the technical work must undoubtedly be rewarded, carried out by a development team probably composed of a small number of components. The icing on the cake could only be the audio sector marked by an English dubbing, accompanied by Spanish subtitles, with a markedly British accent and which is framed by a soundtrack with decidedly heavy metal hues that is well suited to the atmospheres that characterize Hired Gun.

Necromunda Hired Gun manages to give interesting atmospheres thanks to the particular setting of the anthill planet taken from Warhammer 40,000 but it sins in several parts both on the narrative and on the gameplay front. A real shame because from a single player campaign one would undoubtedly expect something more in terms of history while the gunplay phases, among the most successful things, are indeed fun, thanks to the frenzy of firefights and frequent gearing, but they often get lost in repetitive and unattractive situations also due to an AI that is not always up to par. However, if you are a lover of Warhammer 40,000 or dark science fiction and don't mind the first person shooter genre, you should give the work of Streum On Studio a chance and delve into the dark and menacing depths of Necromunda. The rest of the players can, however, easily move on.

► Necromunda: Hired Gun is a Shooter type game published by Focus Home Interactive for PC, PlayStation 4, Xbox One, PlayStation 5 and Xbox Series X, the video game was released on 01/06/2021

Do you want to be an expert and know all the tricks, guides and secrets for your video games? Epictrick.com is a group of video game enthusiasts that want to share the best tricks, secrets, guides and tips. We offer the best content to be a source of useful information, so here you can find guides, tricks, secrets and tips so you can enjoy your games to the fullest. Are you ready to get all the achievements of that game that you resist so much? Enter and enjoy your favorite video game to the fullest!
NEO The World Ends With You - Preview ❯

Crash Bandicoot 4: It's About Time - Review