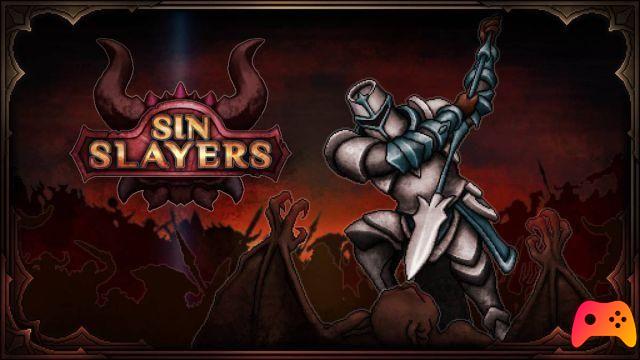 In the universe of indie games it is not easy to find titles of a certain interest also because very often, due to low budgets, it is easy to come across products that are not completely complete or clones of other more famous games. A small Russian team under the name of Goonswarm tried, with Sin Slayers, to add some interesting ideas to a classic and already seen genre. Sin Slayers is an RPG that draws inspiration from Darkest Dungeon by adding a turn-based combat system and some really interesting ideas.

In Sin Slayers we will find ourselves managing an initial group of 3 heroes - a warrior, a priestess and an archer - who have found refuge in a church in the Valley of the Fallen Sinners, a fantasy kingdom where the forces of evil are the masters. A wise old man will inform us - through simple text messages - that the kingdom has fallen into the hands of the Lords of Evil and that to save the defenseless population we will have to eliminate the seven deadly sins that dominate it. He will therefore entrust us with the first quest of the game: to find the blacksmith of the country who with his skill will be able to forge everything necessary to defeating the seven Lords of Sin who represent, in fact, the seven deadly sins. 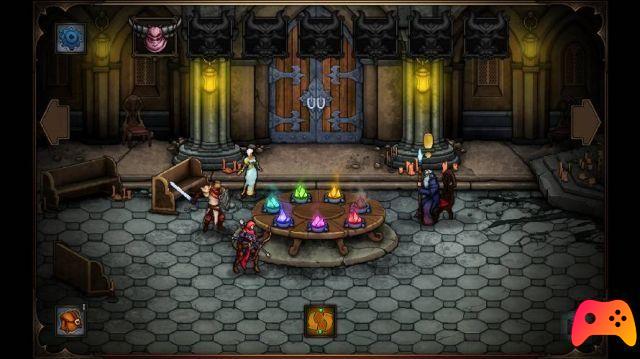 Our party is initially made up of a tank, a healer and a dps. Each of them has a series of values ​​that determine their overall level. It starts from level 1 and you can reach, through fighting or crafting, the maximum level that is 5. Each hero also has two slots to be able to equip him with weapons, armor and other objects that we will find along our way. Finally, each character has personal skills that can be used in battle and closely related to the type of hero that can also be improved. Following the completion of the various missions, other playable characters will be unlocked for a total of 10, each with their own strengths and weaknesses. It will be up to you to choose the right mix of heroes to best face the various monsters waiting for you outside the camp.

In search of lost sinners

The seven areas of the map by Sin Slayers, corresponding to the seven deadly sins, hide the Bosses to be defeated to continue the main story and each of them contains two dungeons. After finding and defeating the mini-boss in the first dungeon we will have to do the same thing with the real Boss in the second. 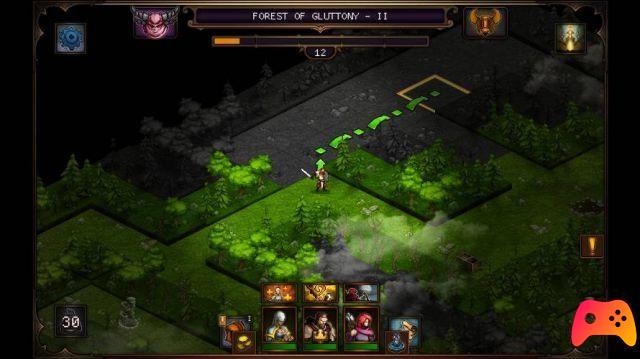 Dungeon maps are randomly generated and can be explored through an isometric view made up of paths divided into boxes. During the exploration we come across portals for teleportation, fountains to restore energy, traps, graves, corpses, chests, merchants and various NPCs who will assign us short missions to carry out. Interacting with some of them changes, positively or negatively, the indicator of sinfulness i.e. a bar at the top of the screen, divided by segments, which determines the level of strength of the enemies we will face in battle. Not only that, even the use of items such as food to restore energy or craft items affects the level of sinfulness.

Yes, you got it right, we will determine the level of difficulty of the game, based on our choices. This is certainly an interesting idea but it could have been managed better, as avoiding interacting with the various objects scattered around the dungeon we will almost always face low-level enemies even in advanced stages of the game. If we add this to the exaggerated quantity of the various foods or objects that we will collect after having defeated the enemies that will face us from time to time, we will end up with an all too simple level of general difficulty.

Inside the dungeons you will inevitably encounter a great variety of enemies and, in most situations, you will be forced to enter the battle carrying a maximum of 5 usable objects with you during the fight, which will take place in turns against up to three enemies simultaneously. You will face a large variety of enemies and during the combat phase it will be possible to swap the position of the three heroes according to the needs or the different strategies you want to implement. 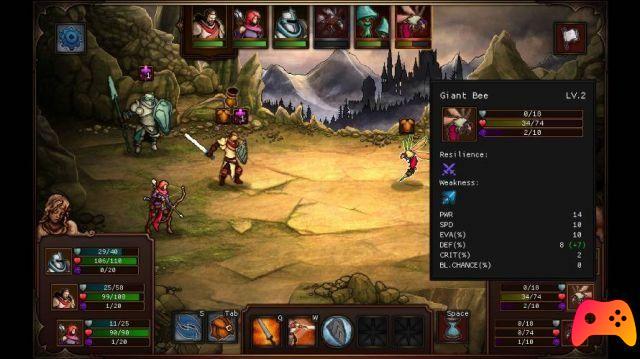 Another interesting aspect of Sin Slayers is that your enemies also have strengths and weaknesses but it will be up to you to discover them as you face them. The variety of enemies to fight, including all the bosses of the various levels, is more than satisfactory and the various graphic models, albeit in 2D pixel-art, are well made and cared for. Even the animations, albeit simple, are varied and nice to look at.

Enemies die when their energy bar reaches zero. For your heroes, however, the final death - the so-called permadeath - does not exist: you will find them at your camp once the dungeon is finished or if you give up and leave prematurely. There is also the possibility of bringing them back to life directly in combat using a special stone that you will find from the merchants or that will directly manufacture the blacksmith present in the base of operations. Unfortunately, this aspect also goes to the detriment of the general difficulty of the game as the ease with which it is possible to take care of these stones is really negligible. 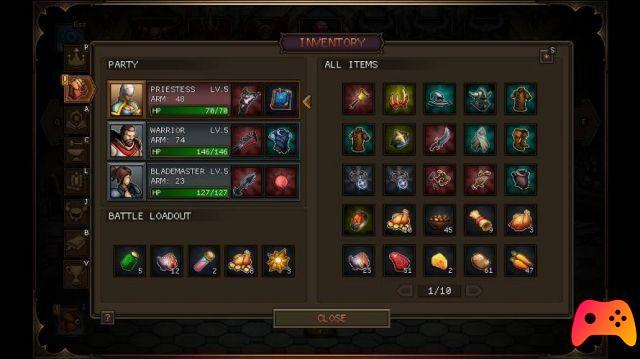 Even skilling our heroes up to the maximum level, or 5, is all too simple. It happened to us already in the fourth dungeon to have all three characters at the maximum and face level one enemies, with the impression that the adventure was a bit of a waste of time. In part, this also applies to bosses, who, if faced with these conditions and with the sin bar at a minimum, do not turn out to be very demanding. Too bad because a greater balance between all these factors would have made it an excellent game from all points of view. 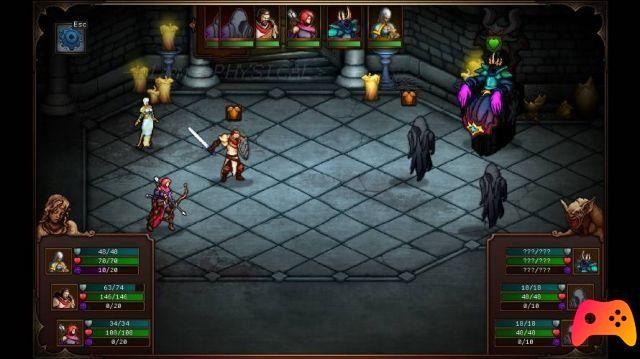 After the fight and eliminated the various enemies we will be rewarded with the most disparate objects: swords, armor, magic rings, food to restore energy and other items that, via the menu of crafting, can be combined to obtain magical potions, keys to open locks and more. Sin Slayers, despite some flaws, still invites the player to go all the way but hardly, once the game is over, you will want to start from the beginning.

Sin Slayers is available for PC via Steam at a price of € 12,49. There are also future versions for PlayStation 4, Xbox One and Nintendo Switch. 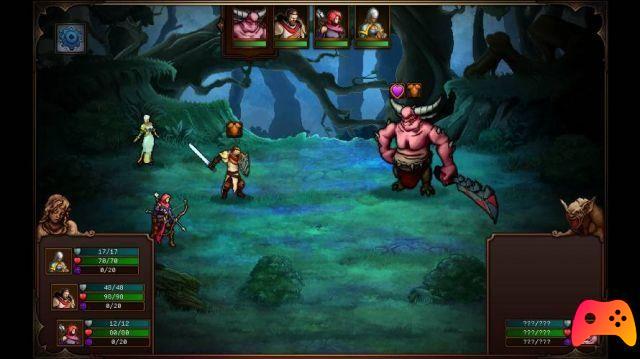 Sin Slayers, considering that it is still an indie game, is all in all a good game, with very accurate 2D pixel-art graphics and with good ideas in terms of gameplay that introduce bright and very interesting elements in the RPG genre. Sometimes the fights are too unbalanced in our favor but, if you want, you can make them more interesting by increasing the in-game difficulty. Defeating the Lords of Sin from time to time, or the Bosses at the end of the dungeon, gives satisfaction even if, once the game is over, you will hardly start everything from scratch. Sin Slayers, after its official release on Steam, will be updated regularly with patches and the developers have promised, in the future, the introduction of new features. So if you have a few bucks aside and are an RPG fan, we recommend giving it a try.