Sky: Children of the Light - Review

Review for Sky: Children of the Light. Game for Android, iOS and Nintendo Switch, the video game was released on 18/07/2019 The version for Nintendo Switch came out on 30/06/2021 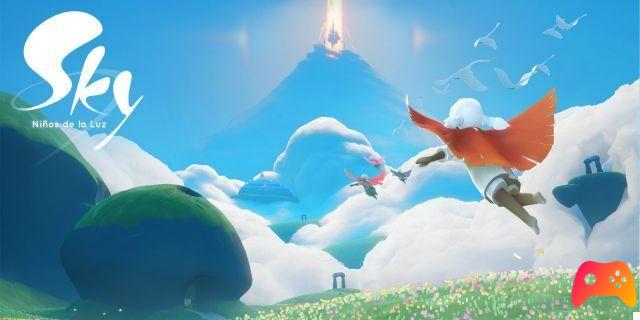 Thatgamecompany is a name that no longer needs an introduction. After dreamlike masterpieces such as Journey and Flower, this indie software house, led by Jenova Chen, is recognized as synonymous with quality and care that blend wonderfully with symbolism and internalization. The videogame medium takes on a purpose that goes beyond mere relaxation or fun, becoming a means of introspection and reflection capable of enchanting and making the player grow.

With Sky: Sons of Light - which after landing on Android and iOS also lands on Nintendo Switch - Chen and Thatgamecompany combine cooperation and sharing to the values ​​already acquired previously, creating a truly amazing social video game.

And then we went out to see the stars again.

All the titles of the software house make the plot their fulcrum without actually revealing it if not a little at a time. Almost absent dialogues and fragmented information during the adventure do not undermine the essence of the story of Sky: Children of the Light, which conquers the player calmly, step by step, accompanying him on a journey that is the heart of the experience and not the means to achieve a goal.

Our protagonist will have the task of saving the souls he will meet along the way by reliving their memories and thanks to these he will discover fragments of a simple but no less compelling plot. After waking up in a world of darkness it will be our task to bring light to every corner, in order to free the petrified souls from the darkness and restore light to the constellations, until we reach the final goal and be able to illuminate the entire celestial mantle.

Your destination is never a place, but a new way of seeing things.

The game environment of Sky: Sons of the Light is composed of a similar open world shared, with a central reference hub in which we can, for example, interact with other users or act on the personalization of the character. Our task will be to explore the areas accessible from this hub, completing each one from time to time to move on to the next. But facing Sky: Children of the Light as a series of missions to be carried out is absolutely the most wrong you can do.

Sky: Sons of Light is a title to be taken calmly and lightly: you must try to grasp the ideas offered and pause to explore everything with calm and lucidity. The social aspect of the title, then, is the sweetest and most surprising thing you can meet.

A good traveler has no specific plans, his aim is not to arrive.

The component that brings a breath of fresh air is precisely the possibility of interaction with the rest of the world that populates the open world of the game. First of all, let's start by saying that you won't be limited to your platform or continent. Sky: Children of the Light will allow you to share the experience in cross-platform and borderless mode: meeting a Japanese player on Android on the other side of the world was, just to give an example, our first interaction.


Thanks to a candle exchange system, it is possible to make friends with anyone and for example sit on a bench to chat, and then share a piece of the adventure together. You can exchange objects, greetings or engage in real discussions, once the language barriers have been overcome. The candles and other elements will be conquered during the adventure but they are also available in packages with varying prices, and are used to make friends and to get a personalization of the character to say the least cured. Each stage will give you the opportunity to expand your object pool and your appearance by making your character unique.

Those who travel without meeting the other do not travel, they move.

Some game sessions of Sky: Children of the Light then require to be overcome in the company of other players, but this from a title that boasts a social component we expected it, what instead surprised and surprised us is the possibility of entrusting ourselves to others. connecting with them to let them guide and transport us through the game schemes, simply remaining there staring at our character who, hand in hand, is elegantly carried like a leaf in the wind.

A sort of expression of trust in other players that puts you in a position to enjoy the title at a level of collaboration that makes you think and captivate. In the same way, others will rely on us, teasing our sense of responsibility and it will be our task to guide them in the discovery of the colorful worlds that surround us in order to enjoy together the experience offered. Without rushing and taking all the time it takes.

As far as the visual experience is concerned, Sky: Sons of Light presents itself with colored and multicolored backdrops albeit stylized and barely hinted at. Populated by creatures of light, the play patterns are varied and harmonious despite their extreme simplicity. Sky: Sons of Light is a title that obviously does not aim at photorealism but does not convey less emotions than other titles, on the contrary.

This angular and colorful nature, with plays of light in the clouds and jumps aboard illuminated manta rays, joins a soundtrack that holds up the atmosphere, embellishing it without ever making the experience invasive. The player finds himself in a context populated by other players with colors, sounds and plays of light that if admired calmly and without anxiety are also able to confer a sort of balance that relaxes and enriches.

A journey of a thousand miles always begins with the first step.

The port on Nintendo Switch, the version we tested, of Sky: Sons of the Light is as always beautifully made and the Nintendo laptop (we will never tire of repeating it - NDR) is the perfect canvas for indie paintings. In addition, this port brings with it some new features such as the Starlight Desert, a new area that arrives from July 6 and the season pass that includes updates and expansions.

Finding a flaw in this title is difficult, although we can certainly assert that we are not big fans of in-app purchases aimed at mere custom and the social component of which the title is its fulcrum. Even the vaulted camera makes a few whims and lends its side to some small interpenetration but, to be honest, none of these details have such an impact as to ruin the gaming experience.

Sky: Sons of the Light lands on Nintendo Switch after conquering the Android and iOS audience. A dreamlike and meaningful adventure comes to life on the hybrid from Nintendo with a load of awareness and with an intensity that will leave you breathless. The social component turns out to be beautifully crafted and engaging in the context of a story that must be enjoyed calmly and without the anxiety of getting to the end. The important thing is not the destination but the journey itself.

► Sky: Children of the Light is a Puzzle-Adventure type game developed and published by thatgamecompany for Android, iOS and Nintendo Switch, the video game was released on 18/07/2019 The version for Nintendo Switch came out on 30/06/2021

Do you want to be an expert and know all the tricks, guides and secrets for your video games? Epictrick.com is a group of video game enthusiasts that want to share the best tricks, secrets, guides and tips. We offer the best content to be a source of useful information, so here you can find guides, tricks, secrets and tips so you can enjoy your games to the fullest. Are you ready to get all the achievements of that game that you resist so much? Enter and enjoy your favorite video game to the fullest!
Sonic Colors Ultimate - Review ❯

Add a comment from Sky: Children of the Light - Review