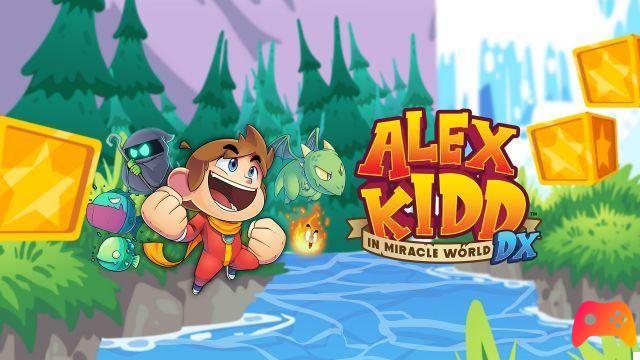 Not many people now know that originally the Sega mascot was not the current and famous Sonic blue hedgehog but rather Alex Kidd, a fourteen-year-old with big ears and powerful fists, voluntary iconography inspired by the famous Japanese monkey from which they I drew abundant inspiration from the media of the time and beyond. The Sega Master System - the then Sega console considered a direct rival of Nintendo's Famicon - had Alex as a cornerstone at its launch in 1986 and this year, as a tribute, the Tokyo-based manufacturer decided to present a remake faithful to one of the first flagship titles of that now distant videogame period.

He sees so light Alex Kidd in Miracle World DX, a nostalgic pearl proposed today by Jankenteam and Merge Games for PlayStation 4, Nintendo Switch, PlayStation 5, Xbox One, Xbox Series X /S e PC tramite Steam. Will the developers be able to snatch a tear from the nostalgics and interest the new generation of the videogame landscape? Let's find out together.

The plot of course has not been distorted or distorted from the original one and traces the original story in a faithful and therefore necessarily hasty manner (we are still talking about 1986 - Editor's note).

In the midst of his training Alex is interrupted by the villain on duty, such "Janken The Great" and unwillingly involved in an articulated and colorful search for his kidnapped brother, Egle. His task will be to face hordes of enemies - in a platform inspired by reasoning rather than speed - in a desperate attempt to bring the situation back to normal.

SEGA points to the nostalgia and affection felt by its fans and therefore proposes an adventure identical to the original one with unfortunately all the strengths and weaknesses deriving from this choice. The risk that the Tokyo house takes is great and, although the weapon of nostalgic love is effective, unfortunately we are faced with a gameplay that to define dated is a mere euphemism.

The new Alex Kidd in Miracle World DX, although equipped with a key which is pressed to a seamless switch between the original and the restored version, is a bit stale and we find ourselves admitting that the indie-vintage effect it is not enough.

Not even the remarkable restyle and graphic enrichment, which endows Alex Kidd in Miracle World DX not only with greater details and graphic quality but also with a series of visible improvements on enemies, backdrops and animations, manages to rejuvenate a gameplay too far in the years. and the almost prohibitive level of difficulty.

First of all, let's start by saying that at the time the platform was not made of immense paintings to be crossed in a hurry but of short stages, in which you had to think and in which it was impossible to go back.


In Alex Kidd in Miracle World DX forget it to mow down enemies on the screen madly: you will have to evaluate the elements present and if and when to engage the clash with the opponents. Every single thing can kill you instantly: enemies, depths, even opening a power up can be deadly and trust me: you will die often, very often. The only three lives available in the "classic mode" risk being consumed without even exceeding the first three game screens and after a good level of swearing you almost always switch to the "infinite lives" mode which, while allowing you to face Alex Kidd in Miracle World DX a little more serenely, it precludes us some trophies and achievements.

The clashes with the bosses are interesting, which instead of being faced with blows should be fought in the Chinese morra (Janken is the name of the original game): rock, paper scissors. Less interesting is the attempt to use anachronistic means of movement that can be purchased at the store, which in fact add little to the original gameplay.

If these defects could also be mitigated by nostalgic love, unfortunately you cannot overlook graphic defects that lead to your departure even when you do not touch the enemy millimetrically but only get a few pixels closer.

This same precision is then lost in pressing the jump button that misfires, or in reaching points on the screen with the left analog without being unsuccessful without reason. If we have to talk about restyling, perhaps more could have been done: in some game sessions, for example, it is more precise if you face them in 1986 mode rather than in this new guise.


The versions for the various consoles are identical and intergenerational. Nintendo Switch behaves identically to Playstation 5 and to the PC and loading and waiting times are almost zero on all platforms.

As far as longevity is concerned, however, we ensure hours of entertainment only because of the high level of difficulty: a hypothetical videogame magician who never managed to perish during the adventure offered by Alex Kidd in Miracle World DX would in fact lead to finished in about an hour.

One last little note: although it is excellent, in the graphic restyle, in our opinion, those parts of the code that are responsible for fighting with bosses or treasures found in the appropriate blocks should also have been rejuvenated.

Alex Kidd in Miracle World DX is a title that focuses on the nostalgia factor by faithfully replicating the original title in all respects, obviously excluding graphics and sound. The gameplay unfortunately suffers the weight of the years and combined with the high level of difficulty and some technical problems unfortunately do not allow to obtain full sufficiency. Perhaps more should have been done to enhance such an important and fundamental character in the gaming world.

Do you want to be an expert and know all the tricks, guides and secrets for your video games? Epictrick.com is a group of video game enthusiasts that want to share the best tricks, secrets, guides and tips. We offer the best content to be a source of useful information, so here you can find guides, tricks, secrets and tips so you can enjoy your games to the fullest. Are you ready to get all the achievements of that game that you resist so much? Enter and enjoy your favorite video game to the fullest!
Anarcute - Review ❯