One of the exclusive Playstation 5 consoles could become cross-gen. Godfall was in fact recorded on PS4 in Europe

Godfall has carved out a window of notoriety thanks to its position as a launch game for the new generation, however now it could also arrive on PS4. In a strange twist, the looter-slasher was recorded for an arrival on Sony's far less powerful console. A weird move for a game that aims to flex the Playstation 5's muscles. 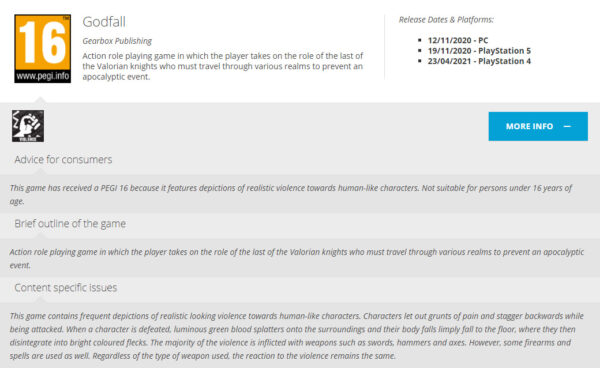 The news comes from the Pan-European Game Information Board, which has added the PS4 version of Godfall among the available. However, many doubts remain. The game does not seem able to run on old-gen, although an excellent optimization could prove us wrong. Also Godfall was recorded with the release date 23/04/2021, which means it was supposed to be out yesterday. Could this be a big mistake? Meanwhile, the game is available on Sony's next generation flagship and on PC!

► Godfall is a RPG-Action game developed by Counterplay games and published by Gearbox Software for PC and PlayStation 5, the video game was released on 12/11/2020
Version for PlayStation 5 from 19/11/2020

Do you want to be an expert and know all the tricks, guides and secrets for your video games? Epictrick.com is a group of video game enthusiasts that want to share the best tricks, secrets, guides and tips. We offer the best content to be a source of useful information, so here you can find guides, tricks, secrets and tips so you can enjoy your games to the fullest. Are you ready to get all the achievements of that game that you resist so much? Enter and enjoy your favorite video game to the fullest!
Godstrike - Review ❯

Finding Paradise: sequel to To the Moon on Switch