How many levels does the Golem have in Clash of Clans and how to use it well?

Golem in Clash of Clans

This large and sturdy being made of stone has earned a great position among players for the amount of protection it can provide. Absorbing damage is his main task and he has the ability to transform into two small golems upon death.

There are currently 10 levels of this character, although leveling up can be a little expensive, it's worth it for his skills. With each level up, his life and resistance to attacks improve, until it becomes almost indestructible.

The appearance of this creature is quite striking and changes as levels are added, at first it is just a rock being with purple eyes. As it progresses, at level 3 it gets darker and at 5 it makes its first color change.

After this level the Golem's characteristics change a lot, first some sort of gems start to appear on its back. Also, you should know that the Golem is becoming more resilient, but the its dimensions do not change. 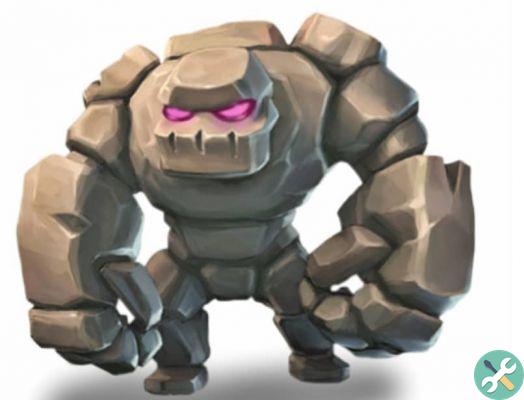 An interesting fact of the last known levels is that, from level 8, the death of the Golem is translated into three little ones, this is very useful. The average life of a Golemite is 25% of the Golem's life and the same percentage of his defense and attack.

Strategies with this character can be great, it usually works very well as a shield for small or less stamina troops. To learn a little more about its uses, continue reading our article, we leave you some tips.

How to get a Golem in Clash of Clans?

This being can be created very easily at level 1, you just need to have a level 4 dark barracks, it is the minimum requirement. Furthermore, you must have 30 living spaces for this stone giant. To grow in Clash of Clans you need to have a large number of gems that you can buy or get for free.

The cost to level the Golem starts at 50.000 dark elixir, this to pass to level 2, you can bring it to level 10. Each level provides an increase in its main characteristics.

Can you have a good strategy with a Golem?

Like the Valkyries, this character is a tank type, meaning it is very resistant to attacks and can be a shield for other troops. Good training with other troops can be satisfying and easily secure a victory.

If placed in front, these beings can withstand the attack of the towers, they can even defeat them if they go in formation of at least two or three Golems. Also, they are able to inhibit jump traps, but bombs can do some damage. Using a Golem is a great strategy that will allow you to reach the Crystal League.

Keep in mind that these characters can be your best distraction, a giant being with great resistance to attacks can easily create a smokescreen. Yours best option is to use the attack towers distraction, to bring your troops.


Check your troop count when you play a Golem; you lose the ability to create 30 characters, because this is the cost of living space. It integrates well with good attacks and other characters that can deal damage rather than just protect. Making a good attack is the main thing in the game, as in this way it will be possible to demolish the town halls.

Finally, a defense advice against the Golem in Clash of Clans, if you get attacked with these beings, you must take it to a place away from the defenses. Attacking him with aerial weapons is the best way to get rid of him quickly, you have to act quickly or risk a lot.

How many levels do Candy Crush Saga, Soda and Jelly have? What is the last level? ❯

add a comment from How many levels does the Golem have in Clash of Clans and how to use it well?