Here's how to get all the Solegatti from this area.

Super Mario 3D World has recently been revamped and re-released for Nintendo Switch, in a form that has convinced many, albeit with some reservations (find the review here). As usual EpicTrick does not leave you alone, so here we are to give you a hand in the exploration ofSaltolà Island, especially in search of all the Solegatti. Isola Saltolà is part of the first levels adventure, not too difficult but, to be able to complete it 100% you will need a good dose of skill.

Each level in Super Mario 3D World + Bowser's Fury has 5 Solegatti and 5 coins, let's see where to find them inSaltolà Island.

This Solegatto is pretty easy to get, you just have to follow the level to the lighthouse. We recommend the use of Mario Gatto to facilitate your travels. 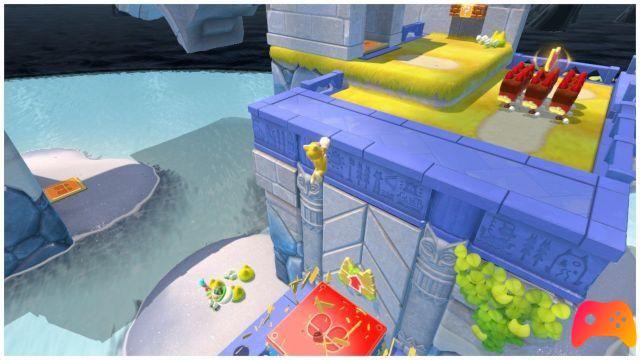 After taking the first Solegatto, move away from the area and return to the beginning of the level to see signs with an arrow pointing to a switch. To be able to activate it you will have to make a crash on the ground, from that moment a timed race will start. Take advantage of Cat Mario's power-up to better tackle the course e reach the Solegatto within 20 seconds. 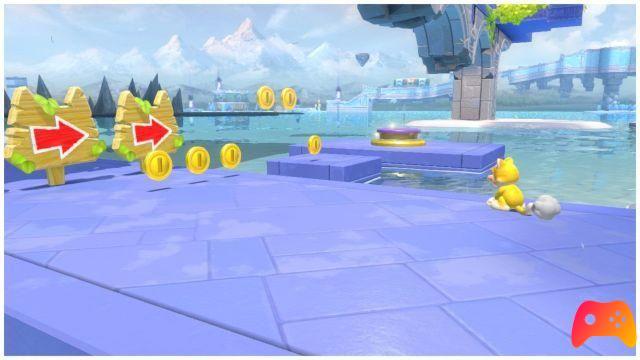 Once you have gone away and returned to the entrance of Isola Saltolà you will find a blue cage with a Solegatto inside. In order to free the Solegatto you must find the key to the cage lock, hidden somewhere on the island. 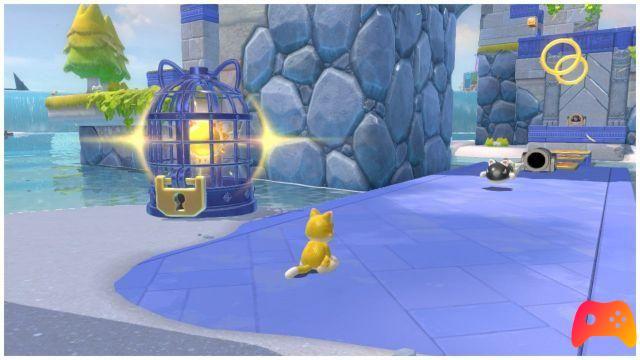 In order to find the key you will have to first reach the the second part of the island, just below the blue slope. From there, the position of the key will be clearly visible that you can easily reach through the Cat Mario upgrade. Once you have taken the key be careful not to touch the water since, in that case the key will disappear and return to its original position. 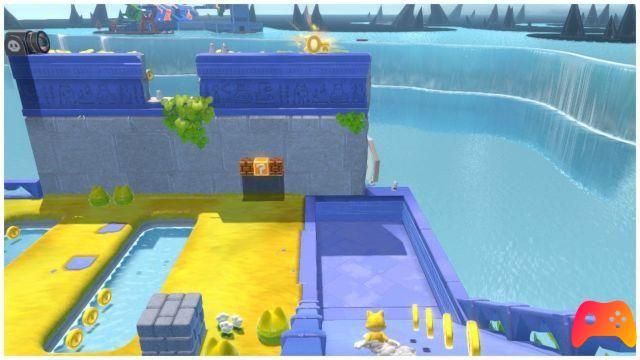 This Solegatto it can be obtained at any time during the exploration and in order to get it you must first recover five fragments scattered throughout the Saltolà Island. 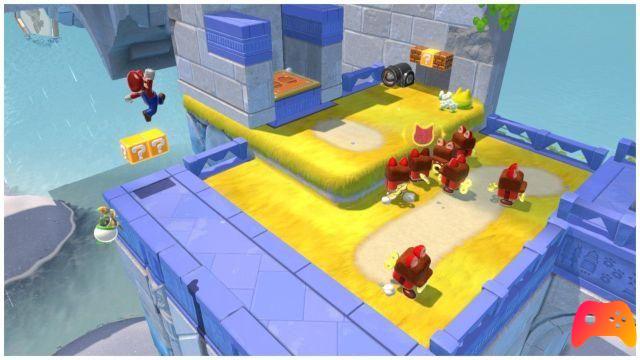 The first fragment is placed on top of a group of Blocksteppers, you just need to eliminate them or jump on them to easily recover the fragment. 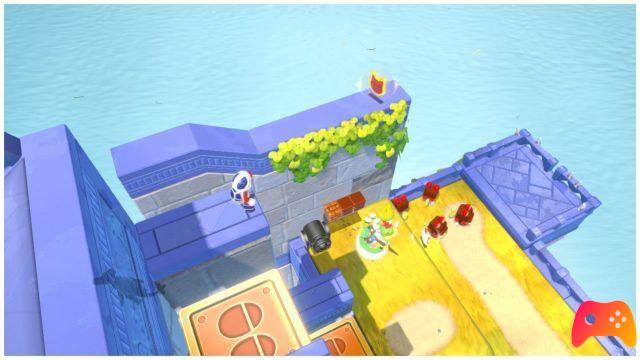 The second fragment is found in the wall just above the position of the Blockstepper group of the first fragment. Depending on your power-up you can use the platforms to get to the wall or climb the wall directly with Mario Gatto. 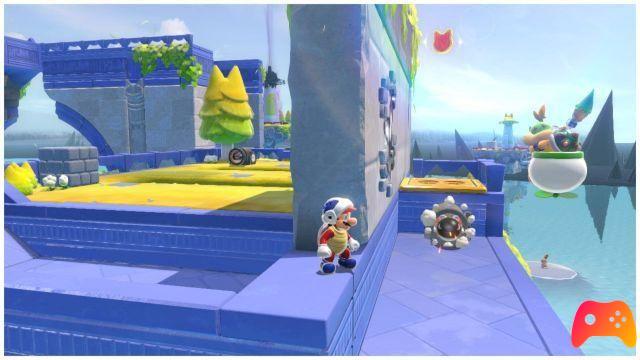 The third fragment can be obtained jumping to the platform hidden behind the wall with the Bullet Cat Bill. Just jump on it to be able to get the fragment very easily. The fourth fragment it is located at the highest point of Isola Saltolà, near the path before the lighthouse. You can choose whether to jump but fall below or use the boomerang wisely to pick it up while staying in your position without wasting time. 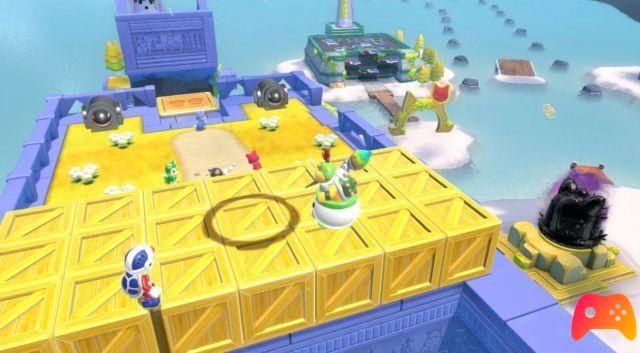 The last fragment is located under the final descent just before the lighthouse. Once there, go back to see the last fragment in front of you. You simply need to defeat a small group of Blocksteppers (or bypass them altogether) to get the final fragment and get the Solegatto. 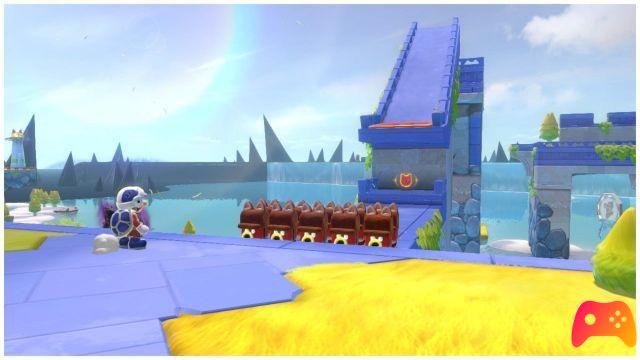 This Solegatto can be obtained at any time of the exploration at the Saltolà Island although, you will need Furious Bowser to be able to collect it. Once Bowser Furioso appears, take him to the area below the slope that leads to the lighthouse. You'll notice a dais and blocks with Bowser's logo ready to be destroyed by his villainy himself. Once Bowser makes the attack and clears the passage you will be able to collect the last Solegatto of Isola Saltolà successfully. 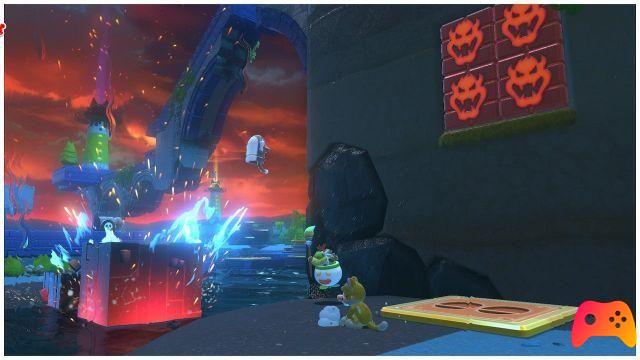 Here we are at 100% of the Saltolà Island level, which you can now leave behind without too many worries. Sgattaiolago, however, is full of secrets, therefore, see you soon with a new guide to the Solegatti of Super Mario 3D World + Bowser's Fury.

Spider-Man: Where to find Fisk's Lair