How to defeat Blood Rose in Diablo Immortal 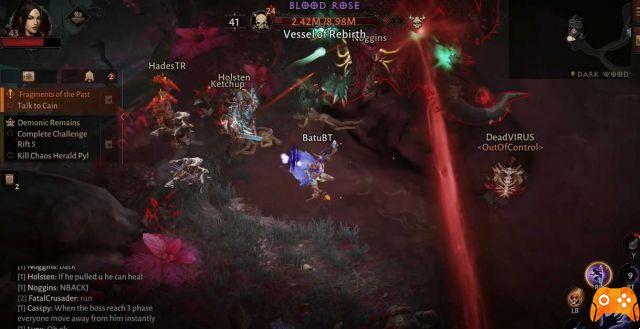 In Diablo Immortal, there are some bosses that act as both the main story boss and the world boss during zone events. Zone Events are basically server-level events where players can join forces and defeat various bosses for huge rewards. Blood Rose is one of them and powerful. In this guide we will tell you where to find Blood Rose and how to beat him in Diablo Immortal.

Initially, you will encounter Blood Rose as part of the Forgotten Tower dungeon throughout the story. After defeating the boss in the story, you can repeat the dungeon to fight him again or wait to meet him as a world boss which is a bigger challenge.

There are difficulty levels in Diablo Immortals such as "Inferno 1, Inferno 2, Inferno 3 or Inferno 4". So the event content is only visible when you are playing on at least Hell 1 difficulty level. These levels are unlocked when you complete the real story game on normal difficulty mode and reach at least level 60 on your character.

Once you have completed the game in normal difficulty mode, change the difficulty to Hell 1 and you will be able to see the events in the area.

Once you are in Hell 1, head to Dark Wood and immerse yourself in the Purify the Corruption event. In this case, you need to fill your corruption meter up to 100%. Killing Blood Rose will give you 28% corruption.

To take on Blood Rose, you have to challenge her in a group as the fight is considerably more difficult than when you have fought it in history. Head to the Lair of the Blood Rose to fight the boss.

How to defeat Blood Rose in Diablo Immortal

Blood Rose has an immense amount of health and therefore requires more effort to take down. She is very simple to deal with except, for one thing, which is her ability to AoE her.


Thanks to this ability, she is able to replenish her health and heal herself again and again, making it difficult for you to take her down.

Try not to be in the area of ​​its damage. In that particular area, he sucks the opponent's health and replenishes his own health. This means harming yourself and healing itself.

Aside from being in its damage area, there is no such complicated technique to combat it. Go with the flow and you will be able to defeat her. Just remember to avoid being in the damaged area.

How to win the shadow lottery in Diablo Immortal ❯