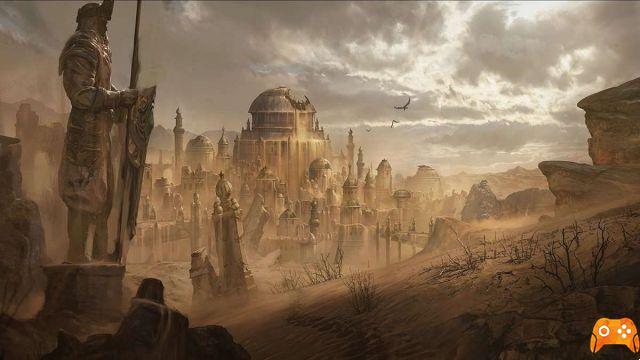 To reach the Shassar Sea area in Diablo Immortal, you need to retrace the main story to the end of the Dark Wood questline.

You will then receive some additional Western March missions. These missions will take you to Westmarch Docks. Once there, Deckard Cain will send you to a new area of ​​Diablo Immortal, called the Shassar Sea.

The Shassar Sea Zone has a rather long storyline, a very unique zone event, and a special dungeon. While in this area, you will encounter all kinds of mobs, including the rare Diablo Immortal Elite mobs.

The recommended character level for the Shassar Sea Zone in Diablo Immortal is level 28-36.

The objective of the main mission of the Shassar Sea area is to find where the Zoltun Kulle Library is hidden. This is going to be a long process, so be prepared for an adventure.

A path in the sand

Run forward until you meet Thiago and his bandits. Kill them all and then talk to Zov. She searches for a key in Thiago's corpse and then frees Zov from his bonds.

Follow Zov to Tabri Camp and then talk to the injured lookout lying on the floor.

Follow the NPC to the location where there is a Lacuni Raid. Kill all 12 Gaps and then find Tabri and talk to her. She is the woman with the yellow scarf over her head who fights enemies near you.

Go back to Zov and talk to him. She will tell you to save the Amber Blade Bandit for him and kill his slave.

Go down the stairs behind you and then turn left. Break through the barricades to find the Amber Blade Bandit. When you untie the cords of her hands, you will find that the Lacuni have killed him.


Your next goal is to kill the mini-boss called "Alvas". After killing Alvas, he loots his body to obtain Alvas' mangled skin. Take it back to Zov, who you will find outside the Tabri Camp.

After talking to Zov, go to Tabri and deliver Alvas' mangled skin. He will tell you to hang her skin on the gate next to her. After hanging the skin, he talks to Tabri again and she will tell Zov to take you to Peth.

Zov will first take you on a small detour where you will talk to Emigne, a jeweler. You can upgrade your gems and sockets and even craft gems from the jeweler.

After upgrading your gems, talk to Peth until her dialogue is exhausted. After talking to him, grab the map piece from the desk behind him.

Follow the path on the floor to find the Chamber of Wisdom. Once there, go inside and kill the undead mobs.

When the area is clear, examine the door in front of you and then inspect the Lingering Souls in the middle of the room to spawn a mini boss called "Watep The Sacrificed".

After killing the boss, you will be able to open the door. When you go through the door, another boss called "Corphet the Venomwing" will appear. Kill the boss to get the Sceptor Piece, called Fahir's Command.

Talk to Zov outside the room and then follow the path back to Tabri. He hands over Fahir's command to Tabri to continue with the questline.

Kill the boss and then return to the main chamber. Here you will find the second icon, which you have to kill too. After killing him, enter the Inner Chamber and kill King Fahir.

After killing King Fahir, go to the next floor and activate the elevator to go deeper into the Tomb. Kill Segethis to get Fahir's face and then return to Sereth's outpost. Give the face of Fahir to Tabri to continue the questline.

Kill Skorpsine before making your way to the end of the chamber, where you'll find Fahir's Light. He returns from Tabri and gives her the Light of Fahir.

As a reward, Tabri will tell Peth to give you access to the Zoltun Kulle Library, which is located just north of the Sereth outpost.

Follow Peth and use the waypoint to quickly reach Sereth's outpost. Peth will be ambushed at the outpost, so you'll need to kill the mobs in the area before you can continue following him to the library.

Once you reach the Zoltun Kulle Library, you will find that you need to reach level 35 to explore the area.

There are many different ways to farm XP in Diablo Immortal. One of the quickest and most efficient ways is to farm Elder Rifts.

Once you level up to level 35, you will be able to enter the Zoltun Kulle Library, which will end the Shassar Sea area questline.

How to farm the Shassar Sea Zone in Diablo Immortal

There are many different ways to get rewards from the Shassar Sea area. Below, we've listed all the different activities you can do in this area.

For the Lost Artifacts also in the Shassar Sea, you need to find a Mysterious Scroll. The process of finding this scroll is quite simple. All you have to do is kill the mobs until one of them drops the scroll. The best place to farm mobs in the Shassar Sea Zone is the Realm of Horror.

Once you have the Mysterious Scroll, open it to see a map with a location marked on it. This map will take you to a lost artifact. Head to the marked location and kill all the enemies before opening the cans.

When Calim teleports using the portal, he talks to him and then travels quickly to the Tabri Camp. There you will find Calim again. She talks to him once again to complete the Shassar Sea Zone event and get his rewards, which we have listed below.

Code of the Sea of ​​Shassar

The Shassar Sea Codex is unlocked when you reach level 20. To unlock its achievements, you must finish the Ashwold Cemetery story and then go to the Bounty Board in Westmarch.

Once there, complete the first bounty to unlock the Shassar Sea Codex achievements.

Below, we've listed all the Shassar Sea Codex objectives and how much experience you will gain by completing them.

Fahir's Tomb serves as the prison of the Shassar Sea Zone. If you have completed the storyline, you will have already completed this dungeon once.

The dungeon has three stages. In Stage 1, you must kill the Icon of Rebirth and the Icon of Souls.

This will open the door to the Main Chamber and Phase 2 will begin, where you will fight King Fahir.

After killing King Fahir, go through the door behind him and activate the elevator. You will be ambushed by mobs while on the elevator. After defeating the mobs, the elevator will collapse to the floor, which will mark the start of Phase 3.

In the final stage of the dungeon, you will fight Segethis, a giant spider monster. After killing Segethis, you will have officially conquered the Shassar Sea Dungeon.

Note that this dungeon can be attempted either alone or with a group. To find a group, go to the Courtyard Waypoint in Westmarch and talk to the Party Recruiter to find a group.

There are many elite (blue) missions and hidden lairs present in the Shassar Sea area, but their spawn locations are completely random.

However, you can forcefully regenerate Hidden Lairs and Elite Quest by clicking on all the shrines and treasure chest variants that you can find in the area. Each time you click on one of them, an elite mission or hidden lair is forced to regenerate