Poland has been a prolific land for leaking Xbox Series X bundles lately. A few days ago, in fact, a Polish user had posted a photo that showed the most powerful of the new Xbox sisters for sale with Assassin's Creed: Valhalla.

For a few hours now, however, the ecommerce of the supermarket chain RTV Euro AGD has included in its catalog the preorder of the bundle between Xbox Series X and the most anticipated (and postponed) game of the year: Cyberpunk 2077. 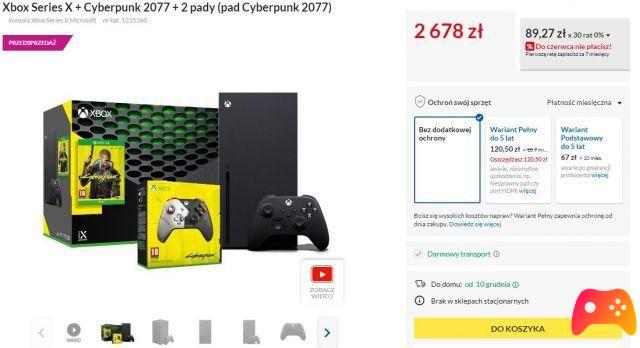 The collaboration between Microsoft and CD Project RED had already proved prolific in the creation of a beautiful Limited Edition of Xbox One. Unlike the latter, however, the Series X included in the bundle will not feature branding of any kind proposing itself in fact with the total black outfit that we all know. However, it is possible to add the Cyberpunk 2077 airbrushed Xbox One pad to the purchase.

Il bundle will be available starting December 10th, but already now it can be pre-ordered at the price of 2399 Zloty for the console version plus game and 2678 Zloty for the version containing the extra pad, at the exchange rate respectively € 536,51 and € 598,90.

In short, we await official confirmation from Microsoft. Meanwhile we just have to cross our fingers hoping that December 10 Cyberpunk 2077 arrives for real.