Legends of Runeterra: the new patch has arrived

Ahead of a Dark Horizon

Riot Games has announced that Legends of Runeterra is updated with the 2.8.0 Patch, many in-game news including the new event: Dark horizon.

Mysterious cosmic powers are ready for battle: the Dark Horizon event kicks off with patch 2.8.0. Journey into the firmament along the Dark Horizon event trail, full of rewards from the far reaches of the universe. A galaxy of customization elements awaits you in this new patch, including the Cosmic and Dark Star skins and our first Legendary tier board, complete with an exclusive Mega Guardian. 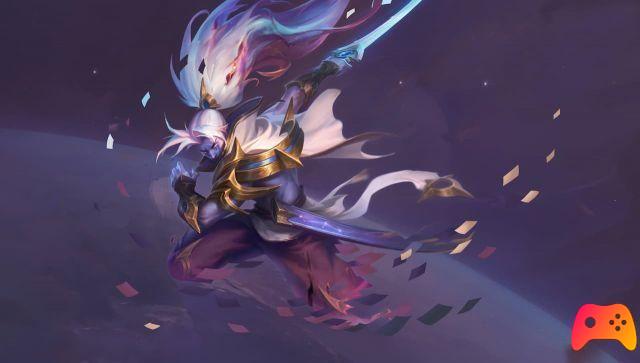 Champion skins are about to make their way into Legends of Runeterra and we're starting off big with four out-of-this-world names coming from the lines Cosmic e Dark Star.

Trapped in an eternal conflict, Yasuo Cosmic Zephyr e Riven Cosmic exile they are the warriors charged with defending the light against the unspeakable horrors of the Dark Star and its minions, Zed Dark Star and Shyvana Dark Star.

The Legends of Runeterra Champion Appearances are a new way to customize your favorite decks and take them to a totally different dimension! By equipping a champion with a skin, all illustrations of all levels in that champion will change, as will its accompanying narrative text. Some skins have completely new level-up animations and can change the appearance of summoned units (e.g. the Living Shadows of Zed Dark Star).


Legends of Runeterra patch 2.8.0 brings a new rotation to the multi-lab:

Grab your favorite decks and call a friend - it's time for a new independent lane 2v2 experience! In Duo Queue: Shared Loot, each player faces a single match simultaneously with their partner. At each handful of turns, members of both teams can choose from some special “supply” cards; unselected ones will be offered to the partner, so decide carefully to make your team win! If both players on a team win their respective matches, they win the match. If only one of the players wins their game, a playoff is played to determine the winning team.

As in other cooperative Labs, the PING system will allow you to communicate with your partner using new messages, which you can also drag and drop directly onto the board or cards!

And that's not all! Winners will get bonus rewards after each triumph, with a small chance of getting epic or champion wilds; the lucky ones can even get Prismatics, so go for it! 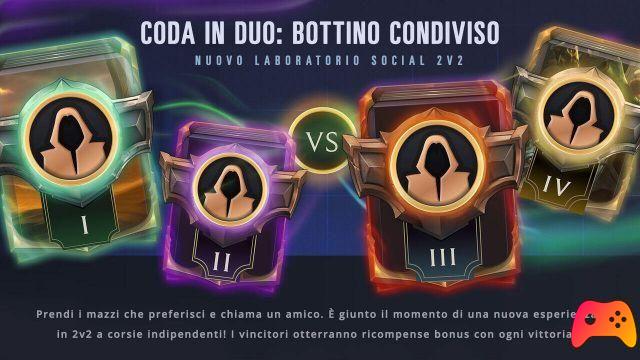 Lots of news in terms of Customization, with new Champions Appearances, Boards, Guardians, Card Backs, Emotes, and Icons, not forgetting the Dark Horizon Event Pass, available in the shop for 975 coins and which grants access to an improved event path with premium rewards, as well as instantly unlocking the Cosmic Genius Von Yipp Guardian variant: Play matches to earn Star Shards and unlock other rewards! Purchasing it before June 2 will give you an exclusive quest that grants 10 Star Shards and a Rare Prismatic Chest. The pass expires at the end of the event, at 19:00 on June 16th.

Do you want to be an expert and know all the tricks, guides and secrets for your video games? Epictrick.com is a group of video game enthusiasts that want to share the best tricks, secrets, guides and tips. We offer the best content to be a source of useful information, so here you can find guides, tricks, secrets and tips so you can enjoy your games to the fullest. Are you ready to get all the achievements of that game that you resist so much? Enter and enjoy your favorite video game to the fullest!
Legends of Runeterra: The mobile version is coming ❯

Add a comment from Legends of Runeterra: the new patch has arrived