Who I am
Lluis Enric Mayans
@lluisenricmayans
Four years to forget.

It is certainly not a good time for Activision Blizzard.

World of Warcraft, Overwatch and Hearthstone would have lost nearly half of the players in just 4 years. This is what emerges from a GameRant report which shows that during the second quarter of 2017, in conjunction with the release of Overwatch and the Legion expansion of World Of Warcraft, Blizzard games would have registered a peak of 46 million players, only to suffer a user haemorrhage that not even the releases of Battle for Azeroth and Shadowlands would have been able to stop. 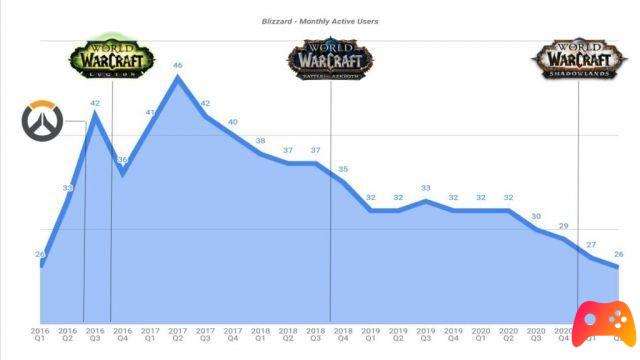 The only period of truce was marked in conjunction with the lockdown caused by the Covid-19 pandemic, the end of which saw the curve inexorably return to decline.

To date, the players have reached 26 million: a good 20 million fewer players than in 2017.

Unfortunately, also due to the harassment scandal that recently saw Blizzard protagonist, the future of the company does not seem to be the best, with World Of Warcraft that seems to no longer attract (as opposed to Final Fantasy XIV) and an Overwatch 2 of which absolutely nothing is known except an alleged release date set in a generic 2023.

In short, the wind continues to turn against Activision Blizzard.

► World of Warcraft is an Adventure-RPG type game developed and published by Blizzard Entertainment for Mac and PC, the video game was released on 23/11/2004 The version for PC came out on 11/02/2005
World of Warcraft is a beautiful game that cannot be missing from your collection: we have decided to evaluate it with a 80%, if you are interested in learning more you can read the World of Warcraft Review

add a comment of Blizzard: Almost half of the players lost