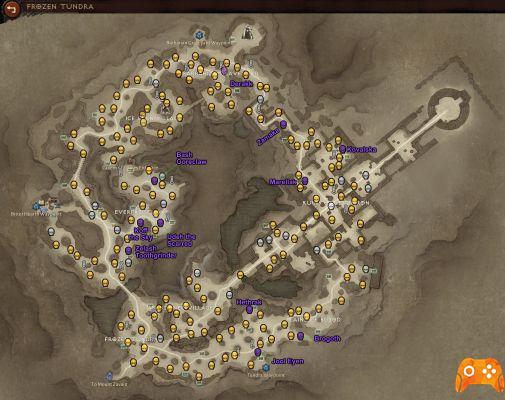 Diablo Immortal's penultimate zone, Frozen Tundra, is the home of the Barbarians and this is where players head as they chase Dravec and his Worldstone Shard. In this guide, we will provide players with a detailed look at the frozen Tundra area in Diablo Immortal and what awaits them here.

The Frozen Tundra, as the name suggests, is a mountainous and icy landscape of abandoned cities, lonely cemeteries and the ruins of Sescheron. For level 50-55 players in Diablo Immortal, this is the penultimate zone after Mount Zavain and before the Realm of Damnation. You will fight demons, yetis and wendigo, cragworms, raiders and other wildlife in the Frozen Tundra.

A monk named Dravec will return to Arreat with a fragment of the Worldstone, planning to give it to Skarn in exchange for a vow to restore his slain brother. You will follow Dravec on the Frozen Tundra.

Enter the frozen tundra and talk to Ull. He searches for Dravec in the Sescheron ruins and talks to Devra.

Continue your search for Dravec in the Sescheron Ruins. You will discover Dravec using the shard to open the door of death. Get rid of the summoned devils. Reach Dravec; he will flee to the Realm of Death via the portal. Return to Devra and Ghirn. Consult Ghirn. To go to Bitter Hearth, use the portal.

Consult Chief Kietarc. Follow Devra to Tassi, who will direct you to the Echoing Cavern in search of the Frozen Tear. Talk to Devra. Enter the Echo Cave.


Kill even more terrifying constructs. Assassinate the glacial colossus. You will receive the Iceburn tear. In Bitter Hearth, return to Tassi. He talks to Devra and give Tassi the Iceburn Tear. He talks to Tassi; he will assign you to wipe out some Khazras and grab their war banner.

Those who came first

Place the weapons of the barbarians on their graves. Return to the Ancient Tomb Talk to Ronkosh. He waits for Ronkosh's gift and talks to Devra. To go to the Plains of Blood, he uses the Portal.

Blessing of the slain

Feram Icejaw must be killed. Bury Torr's Body Give Torr the ancestral seal. He talks to Torr and searches for Devra in the ruins of Sescheron to receive the Blessing of the Slain.

The kingdom of the dead

Examine Devra's body. You speak to Cheiftain Kientarc. Continue the conversation with Tassi in the Ruins. Wait for the Ritual of Badgers. Dravec can be found in the Realm of the Dead. Blast your way through the Spirit Realm. He aids the Barbarian Spirits in their fight against the Demonic Army.

Keep looking for Dravec. Dravec and Tayev must be killed. Return to the living world using Iceburn Tear. After that he talks to Tassia. Consult Chief Kientarc.

Talk to Chief Kientarc and reach level 55. Change the difficulty to Hell I and talk to the Kingsguard.

How to farm the frozen tundra zone in Diablo Immortal

Between the Frozen Tundra, the Abandoned Village and the Plains of Blood lies an unknown region. However, the place is fast becoming famous as one of the most beautiful places to grow the Frozen Tundra Zone as marauders and worms cluster on top of each other to double the experience in half the time. Elite and shrines often pop up here, so keep an eye on the map.

You also have the option to farm the Call of the Ancients zone event in the Frozen Tundra which will have you collect ancient essences and relics. Once enough has been collected, an Ancient Spirit will spawn and move to the Altar of the Ancestors. Upon reaching the Altar, the spirit rewards players with discarded materials.

In addition to the Call of the Ancients event, you can also farm close to 100k XP by completing the Code of the Frozen Tundra. The Codex unlocks at level 50 and instructs players with the following objectives