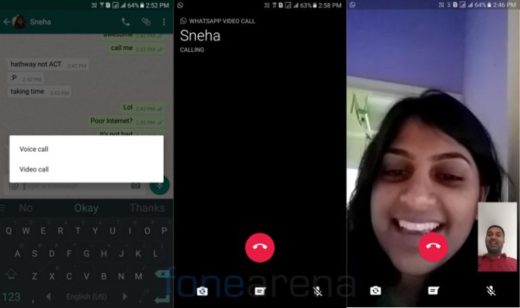 
WhatsApp beta for Android has finally started releasing video calling support. The first app had an option for video calling as early as May of this year.

Now when you try to make a call using WhatsApp, you will see two options one for making an audio call and the other for video calling.

The person you are calling must have the same version of Whatsapp as yours in order to initiate the video call.

If that person doesn't have the same version, WhatsApp will send a message saying, “The call failed. The person you are calling needs to update their WhatsApp application to receive video calls “.

We tried video calling on WhatsApp and the experience was pretty good.

The UI for the video call is simple, you see the end call key in the center, while inversely the camera application, messages and other options are present below it.


After the call was made, WhatsApp asked us for feedback on the quality of the video call, similar to the way it asks for it after an audio call.

WhatsApp video calling has the ability to compete with Google which recently launched the App Duo application.


Download the beta version of Whatsapp to make video calls