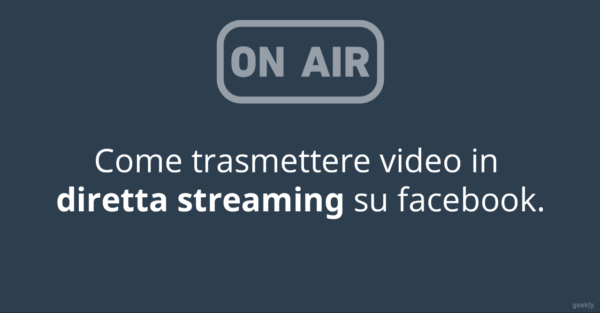 Like streaming video on Facebook, Facebook also had to equip itself to compete with other social applications that allow live streaming. I personally never thought of streaming videos that they could be available to everyone until a few years ago.


In recent times, all social applications have equipped themselves to offer more and more services for their users, such as Facebook, Twitter, Instagram etc. It has been possible to stream videos on Facebook for some time now.

During the live broadcast it is possible to comment, like and much more. The steps to take to make a direct on Facebok are few and simple. Just open the app, click on the appropriate icon in the composition screen of a status and take a shot.

However, there is a simple rule to respect, live videos cannot last more than 30 minutes, at the end of the transmission the video shot remains in the diary like any other video.

Proceed as follows to stream live video to Facebook:

That's all. Many years ago we didn't even think we could do such a thing. Today, however, it is within everyone's reach, or almost. Let us know what you think of the live stream. You like it? It's useless?