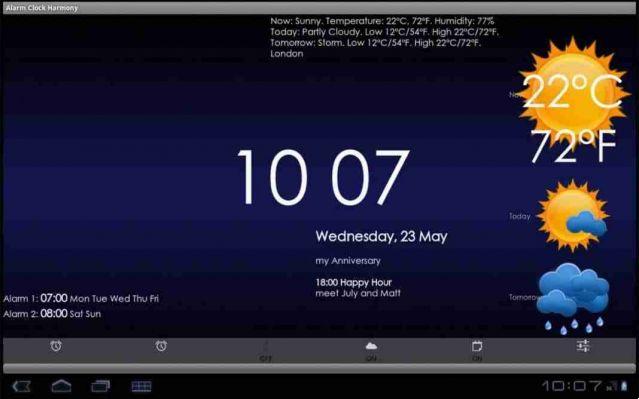 There are many widgets, and even if they are not as complete as apps, in terms of functions above all, they manage to give us one important thing which is the Glance: simply by looking at the Home screen, even to open a specific app, with a glance we will have a series of information on the fly and of various types.

Among the Widgets, certainly the most useful are the Clock widget, that mark the time.

DIGI Clock Widget, one of these applications that can be downloaded from this Google Play page and is completely free.

It is the most customizable Widget ever among those that we will offer you, although it does not have many advanced functions. It is personalized the color, the size, the font, the size of the widget itself, the font, the shading, with truly exhaustive selection parameters that can be set specifically to match the background color or the arrangement of the icons, particularly on tablets where we have more space available.

Customize the graphics of the Widget itself, but you can choose between a series of very particular styles, like what looks like a calendar hanging on a wall or what looks like a bomb waiting to go off. Again, the app is only for customize Widget settings, and is not intended to provide further information if it is opened, other than the direct link to the app in case we want to recommend it to some friends

A The usefulness of this widget lies in the fact that in the part immediately below the Widget it is possible to set a series of quick functions to choose, so that in addition to a clock Widget it practically becomes a Launcher.

The application in this case is the leanest of all: opening it we see a 'widget preview, without any possibility of customization and with some informative notes of the authors, but nothing more. In short, the app itself serves only and only to be able to have the widget on your smartphone, and nothing else.

You know the clock widget already integrated in an old version of Android like Ice Cream Sandwich? In practice, the developers have set themselves the simple goal of bringing it back into vogue, thus allowing its use both on older Android devices and on newer ones that can no longer use it.

What we can customize in the Widget is not the graphics, in this case, but concerns the information that the widget makes available to us, because the themes, however very similar to each other in which the color essentially changes, are only two.

So, at the top is the hour, then we have one graphics indicating the weather and, below, a series of information that we can customize or change: for example, we can choose the location for which to show the weather (which can be fixed or the one where we are at any time), and we can choose when to update the weather, if automatically or manually (I recommend the latter for battery reasons),

Digi Glock Widget is another customizable Widget but in a way still different from the previous ones: here, in fact, you can customize the information that we will see, more than the graphic part. We will also have a choice of colors, and the ability to manage transparencies, but on this level it is not even remotely comparable to the "other" Digi. The application, as in other cases, only serves to manage information.

Within the widget we can customize the information that is provided to us and that in addition to the time are, for example, the day and month (who has never looked at the mobile phone to get this information and instead it was written only the time?), and then we can also add other useful information such as battery percentage, which is much better visible than having to look for it in the top corner, a simple but problematic operation for the wearer glasses and he's not wearing them.

Panda Helper: what it is and how to install it on Android and iOS ❯

add a comment of Best clock widgets for android free