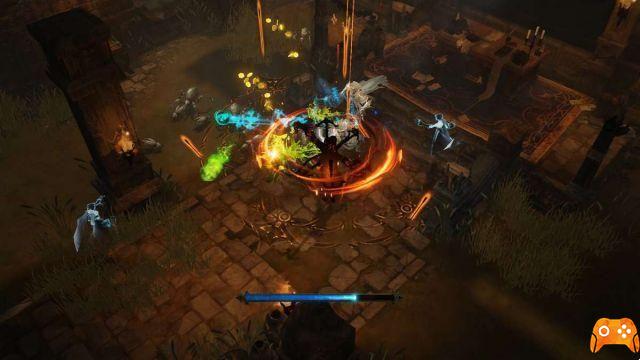 With around 10 zones in total, the world of Diablo Immortal is a delight for adventure seekers. Each of these areas is full of many activities and many places to discover. In this guide, we will reveal the secrets of the Western March Zone in Diablo Immortal and what awaits players in this area.

Acting as the capital of trade and maritime trade in the Western kingdom for centuries, Westmarch was the land where General Rakkis and his Paladins settled.

With the deep-rooted corruption and devastating consequences of the attacks by the Minions of Baal, life in this area has been troubled. Today, this city of lights is led by King Justinian IV and welcomes mercenaries to help maintain peace and vitality in the region.

Westmarch is home to tons of merchants who provide services such as retrieving, upgrading, crafting legendary stones, and purchasing other special items. The market also allows the player to trade gems of any rarity.

A secret organization is said to be hiring heroes to do the dirty work and keep the Immortals in check. You can also become one of those people by visiting the Tavern and talking to the Mysterious Patron.

Below, we will discuss the questline that takes place in the West March Zone in Diablo Immortal.

For this part of the quest line, you will need to stand on the indicated mark on the map which will open a portal for Westmarch, enter the portal to complete this mission.

You will need to find Charsi at Rakkis Plaza where he will tell you the direction of Cain's laboratory that will conclude this part of the questline.

Fragments of the past

Make your way to Cain's Workshop and talk to Cain to finish this mission.

Legend of the Ancient

All you have to do is talk to Cain once more and go through his quest to complete it. After you're done talking, you'll need to go talk to Charsi outside the garage.

Follow Charsi around and talk to the Crest Merchant. After that, you'll need to complete an Elder Rift powered by a legendary crest. To complete the Elder Rift you will have to defeat the Guardian Rift within the time limit.

Finally, go talk to the Crest Merchant to complete the challenge.

To complete this defeat, the Brigands and after that help, Vic returns to the jewelry store. Then join Seril, the Jeweler Apprentice. He then talks to Seril, talks to Vic and finally talks to Charsi.

Follow Charsi into her forge and talk to her there.

At the Bosco Oscuro

Enter the Darkwood portal opened by Charsi. With this, the questline in Westmarch will be over.

There are tons of businesses and points of interest in Westmarch along with several merchants to trade things. Some of them are mentioned below.

Jeweler apprentice is an NPC who can help us upgrade normal gems and create legendary gems using runes.

Charm Craftsman it will help you retrieve charms, along with other useful services like imbuing charms with a stone of skill.

Crest Merchant will sell you rare and legendary crest that will strengthen your Elder Rift.

Essence Transfer Vendor will help you extract essence from legendary items that can be stored for later use.

Charcoal trader fading he will sell you runes that you can use to craft legendary items.

Hilts merchant will sell various items to a normal adventurer and will also sell special items to immortals who are above a certain level of dominance.


Gamblers they are two people dealing with all kinds of rarities and antiquities, allowing players to bet for high quality rewards.

Master jeweler Vic will help you awaken legendary items of level 6 or higher and enriched with 10 legendary gems.

Battlefield captains you can talk to take part in Battleground PvP mode and set up your matches with other players every day at 8:00, 12:00, 18:00 and 22:00 server time for two hours.

Il Barca it will unlock after the level 20-23 story in Westmarch and can be used to travel to other destinations depending on how far you have progressed in the game.

Size advice it's just as the name suggests and will offer rewards for killing or capturing people. It is a good place to level up and earn a lot of gold and materials.

Challenge Rift are challenges with up to 100 levels that a player can scale, each of which rewards the player with tons of resources upon completion.

Elder Rifts are replayable dungeons that can be completed in minutes and are a good way to earn gold and XP.

Identifiers They are found in every zone and can be used to identify unidentified legendary items in your inventory.

Immortal statue it is just a decorative object located next to the portal of the Ascension Room.

Immortals - Hall of the Ascension it is a portal located near the stairs leading to the belvedere - east of the palace courtyard.

Mercato it can be accessed by talking to Dya and can be used to buy or sell depending on the needs of the players. Platinum is the currency used in the market for buying and selling.

Party recruiter can be used to recruit people to your party for different team challenges.

Buffer stock as the name suggests, it contains items or equipment and has 48 slots in total. Additional storage can be unlocked by purchasing bounty gifts.

Wall of Honor it is the place that contains all the information on the immortal precedents and on the greatest heroes in history.

Waypoint they are a way to enter or exit Westmarch and players can teleport to either waypoint from anywhere in the world.