Review for Disgaea 6: Defiance of Destiny. Game for Nintendo Switch, the video game was released on 29/06/2021

Although tactical JRPGs are relatively unpopular and the classic series over the years have tapered off, fans of this genre know they can still count on few but solid cornerstones today such as Fire Emblem and Disgaea. The Nippon Ichi saga has enriched and refined its formula more and more until it culminates with Disgaea 5: Alliance of Vengeance, whose Complete version (of which you can find our review here) is still the most satisfying chapter on the market to date.

About six years after the release of the fifth chapter, Disgaea 6: Defiance of Destiny tries again to bring something new. In the face of several innovations that push and facilitate the mood of excess that has always characterized the series, the new chapter fails to reach a new level of quality for the series.

The protagonist of this new adventure is Zed, a zombie obsessed with defeating the God of Destruction who, as his role suggests, is wreaking havoc in the Disgaea universe. For this seemingly crazy undertaking, the protagonist can at least count on his very peculiar ability, the Super Reincarnation: Each time he is killed, Zed comes back to life in a different world, with increased power. After countless defeats, his wise canine companion Cerberus advises him to stop continuing to face his opponent alone, but to bring companions with him to help him in this titanic undertaking. Even if reluctantly, Zed will therefore begin to enlist various characters in the worlds he will visit, some totally unpublished and others familiar to fans of the saga. 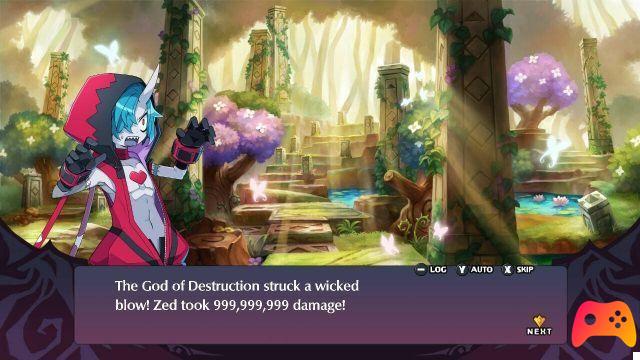 Let's face it: Disgaea has never shone for narrative depth, but rather for the ability to entertain with its typically Japanese zany humor. Again, what attracts the player's attention is mostly the mystery surrounding Zed's motivation to take revenge on the God of Destruction. Motivation which, however, is revealed only in the advanced stages of the adventure. It would not even be a problem in itself - indeed, the narrative style of Japanese productions often follows this practice - were it not that, before becoming interesting, the story is supported solely by the stories of the secondary characters, which follow one another with a cyclical and decidedly trite formula that has very little of exciting.

Even from the point of view of characterization the characters leave much to be desired, falling too banally into the usual clichés; if we add that even some gags struggle to pull a smile in the long run, it is clear that the narrative rhythm and the characters could have been managed better. Let me be clear: some characters and situations will surely know how to amuse you and, in particular, fans of the series and its humor will feel at home; simply, not as much as past episodes had been able to do. 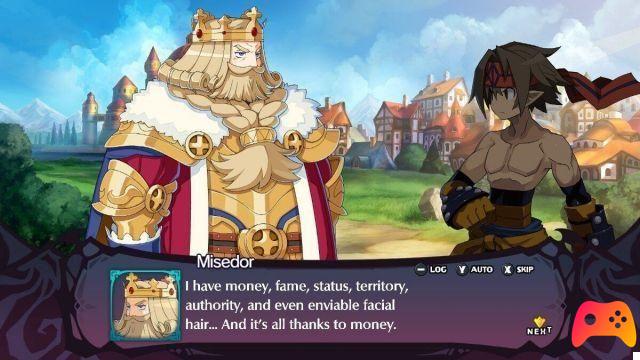 The strong point of Disgaea 6 is undoubtedly the gameplay, which inherits most of the central features of the series, however, trying to stir things up a bit with some innovations. One of these concerns the Super Reincarnation of Zed, which allows us to bring him back to Level 1 with a significant increase in statistics; this allows you to increase the power of the character to levels otherwise unattainable. Speaking of levels, Nippon Ichi has brought the level cap to the absurd figure of 99.999.999, obviously making the level advancement proportionally faster. Also, if in the past experience points were awarded based on actual actions performed (leaving some characters behind), now these are shared by all units that took part in the battle.

In addition to experience, characters also gain Mana points, which can be used to upgrade techniques, spells, and gain Evility. In general, the game places a great focus on unit upgrading, giving the player various ways to do this (and listing them all would be intricate and certainly boring to read); among these the Dark Assembly makes its welcome return with its extremely corruptible senators. 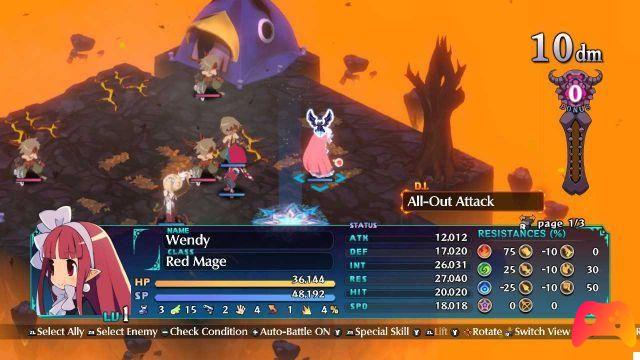 One of the most important features, which we expect to be adopted also in future chapters, is an automatic battle system that allows us to entrust the endless hours of grinding directly to an artificial intelligence. In the arc of the game we will be able to unlock various parameters to customize the Demonic Intelligence, which is a structure of variants according to which our units will automatically act in response to certain situations. For example, if a unit's health drops below a certain percentage, you can instruct it to heal.

It is a system comparable to the Gambit System of Final Fantasy XII, but much more complex, considering the nature of the fights. In fact, setting all the parameters correctly is not an easy task and, if there is a flaw in the flow of actions, the game could run aground on itself, forcing you to intervene personally; which is why it will be important to choose suitable arenas that avoid unexpected events. However, once everything is set up correctly, this system is particularly good for optimizing hours of grinding in order to reach the highest levels. 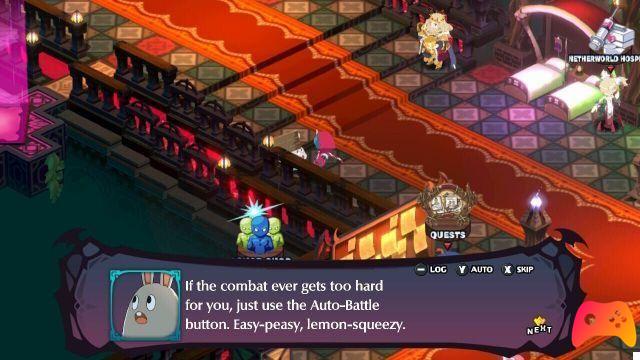 One of the few features of Disgaea 6 that really stand out from its predecessors is the transition from 2D sprites to three-dimensional models for the characters. This is usually done to improve the look of the game, but for Disgaea, things didn't work out well. 3D models can be cute, but their battle animations in particular leave a lot to be desired, with stiff poses, poor facial expressions, and anti-aliasing that gets lost on the way.

Moreover on Nintendo Switch Disgaea 6 suffers from some rather noticeable performance issues at times. Especially when there are numerous characters on the screen, the fluidity tends to decrease visibly, as well as the visual quality. Evidently unable to technically optimize the game on its own, Nippon Ichi has made three different settings available to the player: Graphics, Balanced and Performance. Graphics favors resolution at the expense of fps, which remain well below 30; at the opposite, Performance it favors the fluidity of the game, but it degrades the visual quality in a frankly unacceptable way. The only decent option remains there Balanced, which offers a compromise between the two situations and which in any case is below the real capabilities of the Nintendo console.

The illustrations for their part are always well done. The maps also feature new types of environments that we found stylistically appealing. Each of these areas has been designed according to different themes, usually concerning the story (with the exception of the Item World of course). In general, on an artistic level, the game is pleasant and cared for, as per tradition. 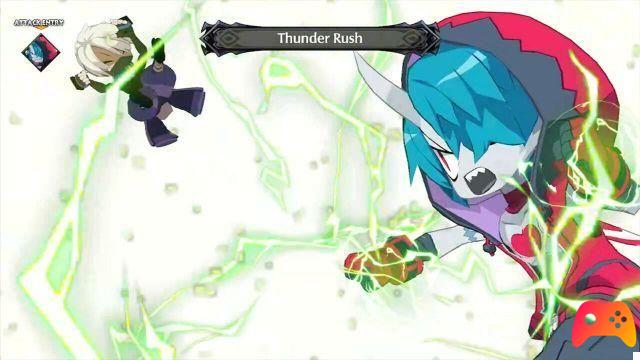 Disgaea 6: Defiance of Destiny is not a bad game, but it takes a few missteps too many without being able to propose a truly reinvigorated formula compared to the past. It is clear that Nippon Ichi Siftware has reached the point where it cannot afford more half measures, if it really wants to renew and carry on this series that is so valid, but which is beginning to suffer from a certain saturation. The latter Disgaea is still able to satisfy fans, as long as they do not expect a chapter capable of exceeding the levels of Alliance of Vengeance.

► Disgaea 6: Defiance of Destiny is a Strategy-JRPG game developed by Nippon Ichi and published by NIS America for Nintendo Switch, the video game was released on 29/06/2021

add a comment of Disgaea 6: Defiance of Destiny - Review