Next week will be very important for fans of football and soccer and sports titles: it arrives eFootball PES 2021.

Net of its nature as a Season Update, the arrival of Konami's football is much felt, both because the title rests on the splendid foundations of the previous chapter and and above all because it officially opens the dances in view of the usual annual challenge with FIFA, which this one year, however, will come slightly later than the traditional release period. In the meantime, the two software houses have already begun to challenge each other with “rating” shots by publishing the list of the strongest players according to their own concept of football. If Electronic Arts has released its Top 100, Konami instead has released the ratings, at the moment, only of the partner teams, that is Manchester United, Juventus, Bayern Munich, Arsenal and Barcelona, with some small news and many confirmations. 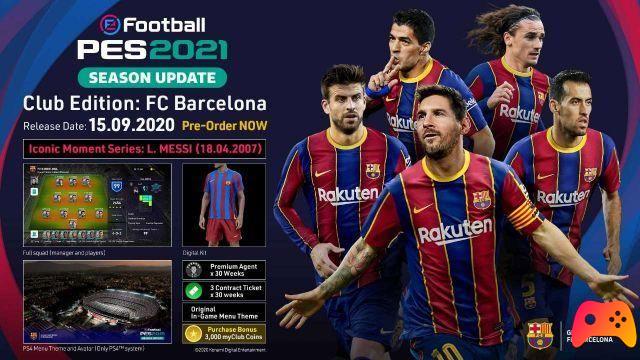 Among these clearly stand out Cristiano and Messi, the two strongest players of last year, who confirm themselves at the top of the list with a value of 93 and 94 respectively. On the podium also the mighty Bayern Munich striker Robert Lewandowski, immediately behind the super duo with an overall of 92.

But here's the full list of the 5 strongest players for each team revealed so far:

eFootball PES 2021 will be available starting September 15th on PC, PlayStation 4 and Xbox One.

Cyberpunk 2077: multiplayer as a game in itself