Electronic Arts will reveal today at 19:00 which players will be part of the FIFA 21 Ultimate Team Summer Stars group. Are you curious?

After the event dedicated to the Festival of Futbal, which ended last week, the Canadian software house already has another one in store, which will start in a few hours. Starting today (July 2) at 19:00in fact, the servers of FIFA 21 Ultimate Team will be populated with the cards belonging to the event Summer Stars, that is the players who have distinguished themselves most during the most important football events (currently in progress) such as the Copa America and the Europeans.

Electronic Arts has therefore selected a group of players who, most likely, will arrive in the homes of players also thanks to the inevitable SBCs and Weekly goals. The event, in all likelihood, should last about two weeks as usual, coinciding with the closure of the aforementioned events.

Meanwhile, thanks to the photos released, players are already trying to imagine what they will be the first players included in the special team. 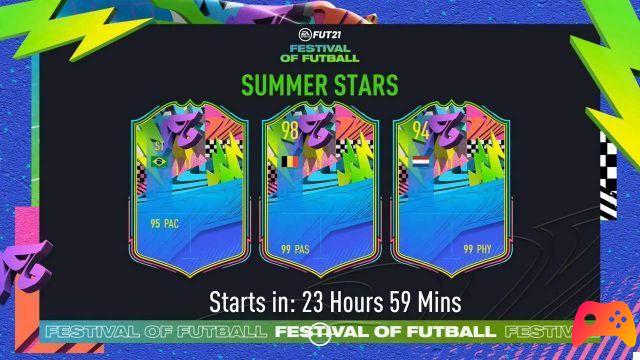 What do you think about it? Who do you expect to find? Let us know in the comments!

Spider-Man 2: we will be able to choose between Miles and Peter

Yakuza 7: karaoke returns with 'Baka Mitai' and other activities

Halo Infinite will run well on all platforms

Add a comment from FIFA 21, the Summer Stars event kicks off today!