Review by Mario Party superstars. Game for Nintendo Switch, the video game was released on 29/10/2021

Home video games were born as a means of aggregation for families, as an evolution of the classic board game, if we want: they can be considered a way to spend evenings with the family having fun and uniting young and old. However, the evolution of the media in question has also taken different meanings over time, bringing the single player into homes and online multiplayer. Often pointed to as a means to isolate oneself, especially when looking for an easy scapegoat, the videogame medium still remains a fabulous aggregator, both within the home and through the powerful connections that now permeate our daily life. To spend fabulous evenings with the family, however, there are Party Games, those titles specifically designed to spend time with loved ones in joy. Among these stands out a series that has its roots in 1998 and extends its branches through ten chapters to give us a really interesting gem.

Let's talk about Mario Party Superstars, the last chapter of the famous series that today lands on a console that seems to have been created for him, Nintendo Switch. 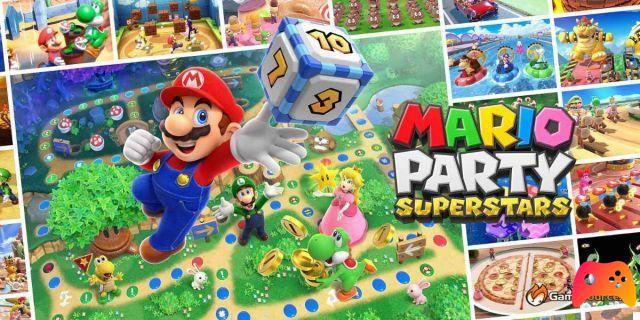 For the few who do not know the title, the saga or the party game genre, we can say that the series of which Mario Party Superstars is the latest arrival is basically the videogame representation of a complex board game. We therefore speak of scoreboards, dice and unexpected events, all projected on your screens. A die is rolled, the box is reached, an event begins in which the single player or the entire group is the protagonist. Although in the end the title could be summed up in these few words, the depth offered and the fun that follows are really much more complex, but let's go in order and see to understand the heart of Mario Party Superstars.

The Mario Party Superstars operation is to be considered as a remake - with high customization and an online mister - of Super Mario Party which in turn contains the best of the previous chapters and in addition to having drawn on the most successful mini games and appreciated by the public, the guys from NdCube have also taken so much more. For example, the game boards are five: we find Yoshi's Tropical Island and Peach's Birthday Cake directly from Mario Party 1999; Space Land and Horror Land, from Mario Party 2 and also the highly appreciated Woody Woods from Mario Party 3. These boards were chosen based on the judgment of the players and we can only agree. Modernized, redesigned and with all the necessary additions, you will have the best of the entire saga in your hands, with several new features and lots of fun. 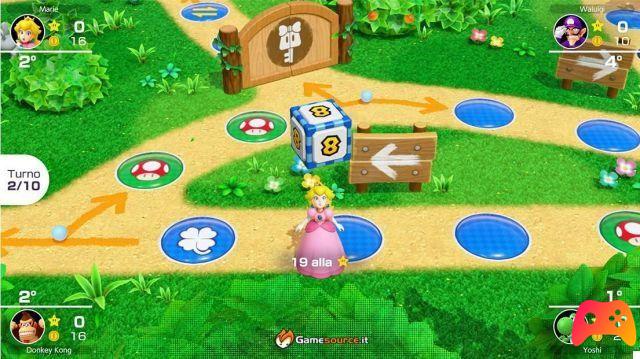 In each of the boards you will find blue, green and red squares: the blue ones are divided into luck, VS and normal. The latter will only give coins while the lucky boxes will allow you to acquire power ups while the VS will start a mini game that will see you against your companions. The greens, on the other hand, are divided into unexpected events, objects and events characteristic of the board such as the Koopa bank for one thing, which if you pass over the box collects coins, while if you stop on it allows you to withdraw them.

Finally, the reds cause you to lose coins, or even worse if marked with the Bowser logo they will see you forced to be scammed or confronted by your archenemy. In addition to this on the board there are an infinite number of interactions that will radically change the course of your game: pitfalls, closed gates, object shops, police barracks, cosmic lasers are just some of the elements that you will encounter on your path and that can take you from the stars to the stables in a single moment. 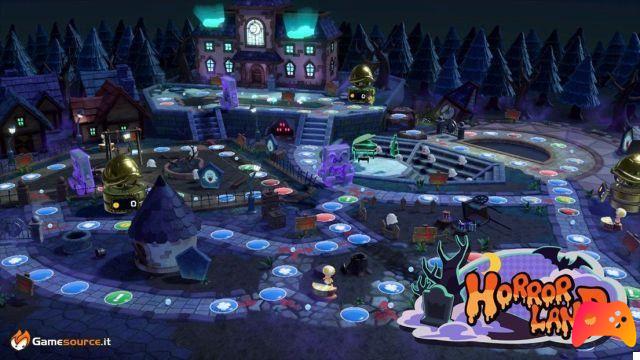 But how do you win in Mario Party Superstars? Simple, collecting stars! Along the way you will meet Toadette with whom you can exchange 20 coins for a star, but watch out, because she is constantly moving. In addition, there are various ways to earn the precious stars including stealing them from others, so if you do not always manage to find one at the first attempt, do not despair, fate is strange and mocking. You will also be able to benefit from the "last minute stars" that are assigned by the title in an eccentric way and with questionable reasons such as "who bought the most items" or "the most unfortunate" and so on, so victory is not never insured!

The management of the game is nothing short of painstaking. You can decide the number of rounds (with the possibility of adding extra rounds), the scoreboard, the number of players (which must always be four so if you play in two or alone the rest of the opponents will be under the control of the Com with one AI settable by level of difficulty) and also the minigames to face. 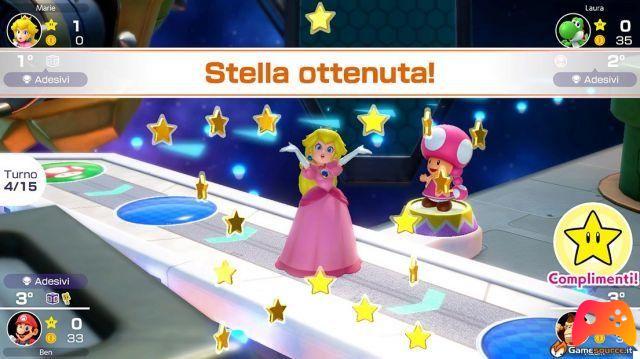 In the main hub you can buy collectibles, access your friends' online, customize options and personal cards and access the "Monte Mini Giochi" where you will find: a classic free mode, the match as a couple (two by two of course), the Self-explanatory “Sports and Puzzles” and “Match XNUMX” sections and a couple of online modes designed for a single player who wants to compete against others.


Starting from the assumption that nothing is perfect, where is Mario Party Superstars sin? To begin with, the controls have been redesigned to allow everyone not to have to use motion control; this unfortunately translates into an excessive ease of the mini games which, objectively, reward those who have played the most by accumulating experience. This therefore favors the development of a feeling of repetitiveness that could make many turn up their noses, and consequently diminish the Monte Giochi section. Probably this, however, is the only defect attributable to the title. 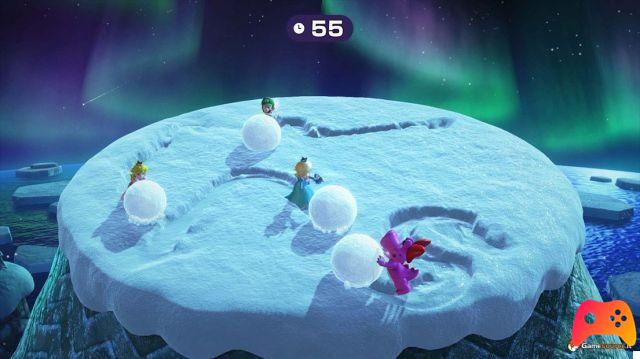 The strengths of Mario Party Superstars, on the other hand, are many. The online sector is fabulous and versatile: it allows four local players on a single console, up to four consoles connected together locally with four players and an online one that allows you to create a large group of friends to face off with or to join randomly with strangers . The best solution, however, remains to play at home with family and friends thanks to the possibility of using up to four separate joy-con: this is where Mario Party Superstars gives its best, in fact this is how friendships are consolidated or terminated. forever.

The management of the scoreboard is then fabulous and allows reversals to the last that change the fate of the game in a moment, moreover the playing field is varied and fun, with crossroads, possible choices and strategies. Each board brings with it its own elements such as the ability to plant carnivorous plants that steal stars and coins, change day for night (with elements that obviously change accordingly) and much more. If you think you have victory in hand, you are very wrong!

Mario Party Superstars is the Nintendo party game par excellence. The Switch hardware lends itself to spectacular and fun games in the company of friends with incredible customization. The historical scoreboards, the iconic minigames, the surprises at the last second are all elements that combined with the fanservice born from the Mario clique make Mario Party Superstars a game to have absolutely and to pull out every time you are looking for something to do in company but even alone, thanks to a truly well-finished online sector that never wavered in our tests.

► Mario Party Superstars is a Party Game type game developed by Nintendo NdCube and published by Nintendo for Nintendo Switch, the video game was released on 29/10/2021

Marvel's Avengers is a Flop according to Square Enix ❯