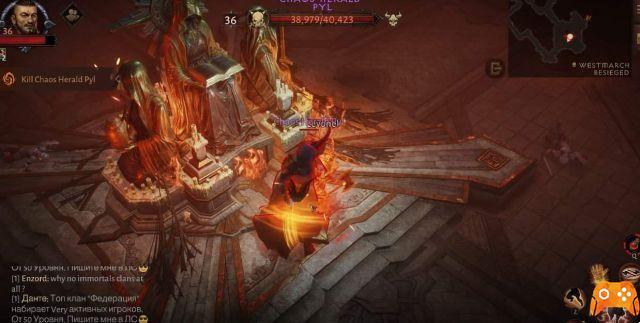 Helliquary Raids are a kind of endgame content in Diablo Immortal, allowing players to party in large groups and take on some really challenging bosses. The Chaos Herald Pyl Helliquary raid in Diablo Immortal serves as a tutorial for the Helliquary system. We have created this guide to help you defeat the boss with ease and unlock the raid feature.

To unlock Chaos Heral Pyl, you will start by doing Rayek's questline, Demonic Remains, to unlock the Helliquary after completing the Library of Zoltun Kulle zone. Once the questline begins, Rayek will ask you to enter the Challenge Rift and defeat the Chaos Herald Pyl and clear the rift floor.

Note that Chaos Herald Pyl will only spawn at the highest level of Challenge Rift that you haven't completed so far. So if you are at Challenge Rift level 20, you cannot defeat the boss at level 10. It must be level 20 or higher.

How to defeat Chaos Herald Pyl in Diablo Immortal

Since the fight against Chaos Herald Pyl is supposed to be an introduction to the Helliquary feature, this is a solo raid. Unlike other Helliquary raids, you cannot group with other players for this.

Fighting against Chaos Herald Pyl is not difficult. But there are some skills like Summoning Demon Warriors o Fiery ground which you need to be careful of.

Chaos Herald Pyl calls out his loyal servants who will ultimately overwhelm you if you don't take them out first. They can be collateral to your AoE attacks.

Burning Ground is another ability where the Herald executes AoE attacks around you and itself dealing constant low AoE damage to anyone within those attacks. Their debuff builds up and can be quite dangerous if you're not careful.


Spiked Ground is a cone attack that will do you when he raises his stick. These do moderate damage and cause some staggering.


Blast Wave can be said to be the latest attack from Chaos Herald Pyl, dealing massive damage. He slams his stick to the ground making area attacks, so even if you decide to tank the shot, you must have at least 50 percent or more HP.

These are the skills that Chaos Herald Pyl uses and you need to be wary of them. Once the boss is defeated, you will be rewarded with Pyl's Flowing Chaos which you will have to bring him back to Rayek to unlock the Helliquary.