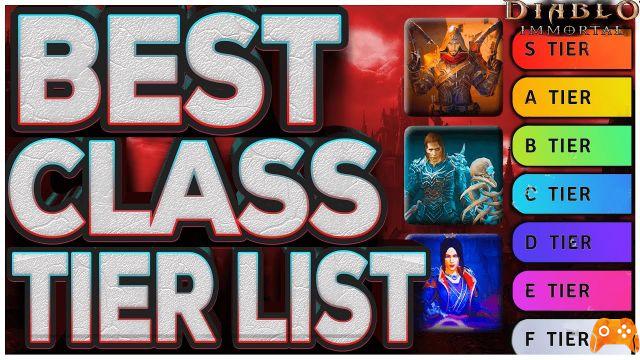 Choosing the right class is essential to your success in Diablo Immortal. Determine the types of builds you will opt for and what your main strengths and weaknesses will be. There are a total of 6 classes in Diablo Immortal right now and in this guide we have created a list of levels for all Diablo Immortal classes that work best in the game's Battleground PvP mode.

The classification of these classes into different levels is done based on some key factors such as Difficulty, Class Dynamics and Damage Production.

The tier list for Diablo Immortal's PvP classes is as follows.

The Barbarian class focuses primarily on AoE and carpet attacks. This class can take a large amount of damage and equally distribute it to its enemies. This class will be perfect for you in PvP mode as you will constantly have to face enemies up close.

The primary attacks for this class are Frenzy and Lacerate. Frenzy deals 945 damage, and with each hit its speed increases by 8% for 3 seconds. Lacerate helps you manage a variety of attacks that inflict 1050 to 1512 damage. With every third healing, you also get a significant amount of healing.

The Crusader class focuses primarily on providing defense and armor. It doesn't deal as much damage as the Barbarian Class, but it certainly absorbs more damage with its heavy shield and armor. This class has the highest survival rate among all other classes in the game.

Crusader works perfectly for PvP as it allows you to support your teammates with different types of upgrades. This class works best for beginners, but if you're someone looking to deal massive amounts of damage then this may not be the right choice for you.

Some notable skills for this class include Spinning Shield, Draw and Quarter, and Condemn. You can deal a large amount of area damage with Condemn in this class. You also have strong crowd control mechanics in this class, ideal for PvP.

The Necromancer works very differently than all other Diablo Immortal classes. With Necromancer's abilities, you can summon undead allies, which help you wipe out enemies. It works perfectly for players who intend to play alone without any team support. Undead allies can help keep enemies busy while you can just move around and kill more enemies.

Primary attacks for this class include Bone Spear and Soulfire. Abilities include Bone Wall, Bone Spiked, and Dark Curse. All of these are great for crowd control and give you immense support when dealing with enemies.

Monk is the class that works best in PvP when you want to deal damage very quickly and keep AoE attacks as a secondary option. The Monaco class is primarily focused on speed.

With his lightning-fast kicks and punches, completely destroy one enemy before moving on to the next. Monk is a middle ground for players who want hand-to-hand combat but find the Barbarian too difficult and the Crusader too slow.

Monk's abilities focus on speed that he can overwhelm and stun enemies with quick and confusing attacks. However, he may need to be careful as this class's ability is greatly affected once he is low on health.

The mage is the ideal class if you are not interested in melee but want to deal with elemental and magical damage. Mages focus on keeping enemies away, unlike other classes that grab the attention of enemies. With this class you can freeze enemies, prevent them from reaching the front line and stun their movements.

The Wizard class uses powerful spells to inflict large amounts of damage that are theoretically possible. With its status debuffs and spells, you can slice through enemies but it's not the best choice if you're someone who likes hand-to-hand combat. Wizards damage output is considerably held back once health is depleted.

Demon Hunter works best in PvP when you want to stay away from enemies and play a support role. Most of Demon Hunter's abilities focus on trapping enemies. This class works best as a support for hand-to-hand combat classes like Barbarian and Crusaders that can grab the attention of enemies and fight them up close.

The Demon Hunter class is a glass cannon with a good dose of AoE ranged attacks that help you make accurate ranged attacks. This class works best for anyone who avoids hand-to-hand combat.