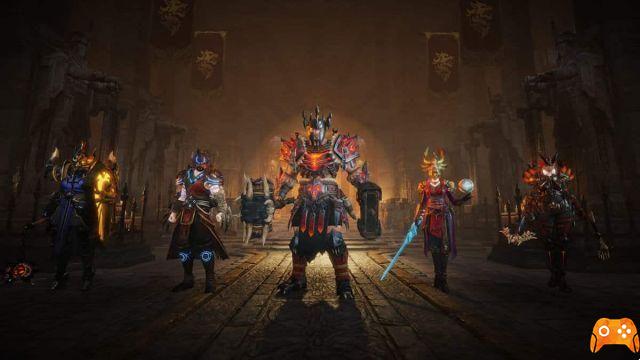 Set items are one of your primary endgame goals in Diablo Immortal. They can only be obtained from dungeons and endgame raids once you have raised your character to level 60 to unlock Hell 1 difficulty.

The following guide will explain everything there is to know about set items by listing all set items that you can get in Diablo Immortal.

The set items are necessary to increase your combat level in Diablo Immortal. They fall under your secondary equipment slots and work in tandem with legendary items for additional bonuses. You can even upgrade your set items up to rank 10 by visiting a blacksmith.

You have six slots for secondary equipment: 1x Neck, 2x Rings, 1x Hands, 1x Waist and 1x Feet. Each Set Item offers a two-piece bonus, a four-piece bonus, or a six-piece bonus. These bonuses are offered if you combine several items from the same set.


You can also accumulate bonuses by wearing different sets for multiple bonuses. For example, you can combine a two-piece bonus from one Set Item with a three-piece bonus from another Set Item. Diablo Immortal gives you the freedom to customize your Set Items to suit your play style.

Diablo Immortal currently has eight Set Items. Blizzard Entertainment will likely add more with post-release content updates as new dungeons or raids launch along the way. For now, however, the following are the set items you can get in the game:

This set primarily benefits the sorcery or magic class, but can also be useful for other classes looking for a powerful PvE DPS build.

Bonus 2/6 pieces: Your movement speed increases by 30% for 2 seconds each time you defeat an enemy.

Bonus 6/6 pieces: This allows you to gain a Soul Orb for 10 seconds each time you defeat an enemy. There is only a 10% chance for this though. Also, there is a 40 second delay between using this skill, so you can't quickly use it in succession.


The shepherd's call to the wolves

This set is very useful for the Necromancer class, but can still prove useful for other classes as well depending on their builds. This set can be used for both PvP and PvE purposes.

Bonus 4/6 pieces: Up to a maximum of 18%, your chance to score a critical hit increases by 3% each time you summon.

Bonus 6/6 pieces: Allows your summons to enter Frenzy whenever you land a critical hit. This hectic state lasts only 10 seconds.

Banquet of the Baron Banquet

This set can be used by any class because it is mainly tailored for PvP builds because it enhances your loss of control effects.

Bonus 2/6 pieces: The duration of your loss-of-control abilities is increased by 30%.


Bonus 6/6 pieces: This allows you to release ice after killing an enemy affected by your loss of control effect. This ice freezes all nearby enemies and deals damage to them.

Grace of the Flagellant

This set is mainly used for PvE builds. Increases all damage types such as persistent ground damage, channeled damage, etc.

Bonus 4/6 pieces: This allows you to deal a certain amount of additional damage to your enemies after 5 successive hits.

Bonus 6/6 pieces: Gives you a 4% chance to summon lightning whenever you deal damage to an enemy. This lightning bolt will stun your enemies for 2 seconds and deal a certain amount of damage on impact.

This set focuses primarily on improving your character's speed and movement strength.

Bonus 2/6 pieces: This allows you to get the Thousand Winds skill. This ability increases your movement speed by 15%, but deactivates for 3 seconds if you are hit.

Bonus 4/6 pieces: Increases the amount of damage you deal by 20% while the Thousand Winds skill is active.

Bonus 6/6 pieces: This allows you to gain a shield that prevents you from taking damage for up to 5 hits while the Thousand Winds skill is active.

This set is mainly used to boost the stats of the main gear.

Bonus 2/6 pieces: Increases the damage dealt by your primary attacks by 15%.

Bonus 4/6 pieces: Up to a total of 25%, your attack speed slowly increases as you use your primary attacks in succession.

Bonus 6/6 pieces: This allows your primary attacks to increase your attack speed by 10 seconds.

This set is mainly used for defensive purposes as it provides survival buffs and shielding.

Bonus 2/6 pieces: This allows you to get a shield. This shield absorbs damage equal to 13% of your maximum health. There is only a 20% chance of receiving this shield every time you take damage, and that too with a time of 9 seconds in between.

Bonus 4/6 pieces: This allows you to gain a shield that absorbs damage equal to 33% of your maximum health.

Bonus 6/6 pieces: This skill bonus allows your shield to explode, dealing damage equal to 40% of your maximum health to nearby enemies. However, there is only a 25% chance that this will happen.

The stresses of Vithu

This set is mainly used to upgrade your teammates. It is best used for secondary roles during dungeons and raids.

Bonus 2/6 pieces: Increase the duration of all positive effects on you and your party by 30%

Bonus 4/6 pieces: Whenever you use a skill to empower yourself or your party member, you will increase the target's attack speed by 30%, for 3 seconds.

Bonus 6/6 pieces: This allows you to create a 15% life drain area for you and your party members for 10 seconds each time you use a skill to empower yourself or a party member. There is a 40 second duration during which you cannot use this ability in succession.

How to get the items set in Diablo Immortal

You can find the set items by exploring the dungeons and defeating their bosses on the Hell 1 and Hell 2 difficulty levels.

However, the final boss of each dungeon doesn't always drop a Set Item. There is only a chance / probability that bosses will drop a random Set Item. That probability is also very low, similar to the legendary items in the game. Hence, you will grind the dungeons a lot in the final game.

You can also search for some specific Set Items if you wish. Diablo Immortal offers a feature where you can locate objects set via the “Recommended Builds” menu. To access this feature, open your inventory and go to the Recommended Builds menu. There, each build will have a Set Item placed in the secondary equipment slots.

All you have to do is find the desired set item in a build, click on the set item, then click the “How to get it” option after it appears. This will inform you which dungeon you will find the set item in and also which difficulty.